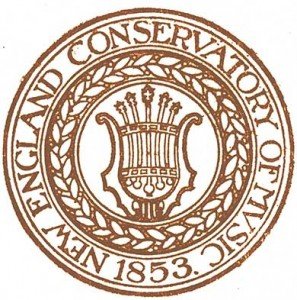 Here’s a secret of great artistry: no one does it alone. This season, First Monday at NEC has been exploring connections and friendships among composers and musicians who inspired each other. Sage impresario and performer Laurence Lesser welcomes all to the latest in the 35-year run of First Mondays in a few days. His assortments of well-loved classics and new compositions, performed by some of the finest chamber musicians in the world, are, as ever, free to all. Lesser goes on to say:

Last December marked the 100th anniversary of the birth of Leon Kirchner.  I couldn’t figure out how to get his Piano Trio No. 1 onstage in time, so next Monday we’re presenting it. Masuko Ushioda (my late wife) and I played it with Leon in First Monday’s inaugural season.  He was a great composer and a vital part of Boston musical life.  That led me to create an  “American” program that I call “Sonorities,” which will include music by Varèse (French but a longtime resident of NYC), a new piece by Ken Ueno commissioned by Marlboro for Kim Kashkashian, a group of Leonard Bernstein songs and a sizzling work for 5 percussionists by Joan Tower.

FLE: So I get it that Leon Kirchner is on the program because of his friendship with you and Masuko…how do bonds of friendship inform the rest of Monday’s show?

LL: He also was friendly with Lennie.  Ken Ueno (I know it’s a stretch) is Harvard doctorate, and Marlboro commissioned it for Kim K., where Leon hung out a lot.Not really much else on that moniker.  See my thought about “sonorities” below.  To be honest, friendship is how I worked to create the season and this is the only program that needed a reach on the theme.

Anything we can hear has “Sonorities.” Please strengthen this dab of thematic glue.

So far as I can tell, none of these works deal with sonata form, heavy duty counterpoint, key relationships – all the things generally commented on.  Leon’s trio is rhapsodic and he alway went by his gut instinct more than a “planned” shape.  I think audiences today need to listen more than read program notes. I hope at least that they want to.   I think every piece on this program asks for that.

Varèse is at turns colorful introspective querulous and raucous. How does it fit in with this happy family of eccentric composers?

Varèse was mostly a New Yorker and this piece is all about sounds.  I don’t know him by the adjectives you use.  I like eccentric.

Do we get lyrical relief in the Bernstein songs? What are they?

You can find them listed on the website for this concert [not yet].  An important reason I chose them is the young singer Darryn Dean who finished NEC last year.  She is charismatic and an intriguing artist.  Standard songs of Lennie that audiences easily respond to (I’m not pandering but I like it when the crowd is having a good time.)

Regarding Ken Ueno’s Atlas of Crossed Destinies…why do some composers use pretentious titles while others write Piano Trio No. 1

Ellen Reid is good at that….  So was Takemitsu.  Ueno’s title will be explained in a program note I am told.  Schumann liked to do both, don’t you think?  Who anyway were the Davidsbündler?  Mendelssohn’s Calm Sea and Prosperous Voyage”; the Rite of Spring.  I think all that tries to capture the imagination of the listeners.

So the last word comes in Joan Tower’s barrage of 5 untuned percussionists…very tribal…more sibling-rivalry sonorities or jungle telegraph emissions (if I may)??

It’s a great way to end the program and I really was taken with its sonorities (sorry…..).

Leon Kirchner: Trio for Violin, Cello and Piano: I

Comments Off on Friendly and Gnarly “Sonorities” Arrive Monday