On Sunday, the Academy of St. Martin in the Fields, in its tenth appearance for the Celebrity Series of Boston, greeted a packed Symphony Hall as part of its coast-to-coast tour of the United States. Since assuming the role of music director of the ASMF in 2011 from its founder Sir Neville Marriner, Joshua Bell has reinvigorated this venerable world-class ensemble (known for its benchmark discography) with a contemporary edge. While Bostonians are no stranger to the collaborative magic invoked by conductorless ensembles (A Far Cry as the mighty exemplar), Joshua Bell and the ASMF provided a welcome hybrid model that brimmed with dynamic nuance and precision. Leading and conducting from the concertmaster’s seat for Mozart’s Overture to Le Nozze di Figaro and Brahms’s Symphony No. 4 in E Minor which bookended the concert, Bell stood at center stage as both soloist and conductor in Paganini’s Concerto No. 1.

As the large chamber orchestra entered, European style, followed shortly thereafter by Bell, a quick sniff and signal lit the sizzling fuse for the opening tutti strings’ hushed piano that begins the beloved Mozart overture. Known for its immense discography and interpretations of Mozart (both symphonies and concerti under Sir Neville Marriner, as well as its soundtrack to the 1980 film Amadeus), the ASMF displayed uniform bowing which provided an opportunity to match sound to sight in observing musical articulations. Bell directed with muscular vigor, limning the imitative lines and volleying between strings and woodwinds to great effect. Using Symphony Hall’s acoustic to their advantage, Bell and the ASMF executed a fantastic piano-to-forte crescendo in bringing the overture to its triumphal coda.

During the subsequent reshuffling of forces this writer enjoyed observing some of the unique instrumental forces of the ASMF, notably the rotary trumpet and (more common to American audiences) double basses with extensions.

Without fuss, Bell summoned the curtain-raiser orchestral tutti that opens the Allegro maestoso of Paganini’s First Violin Concerto. With long held fermata at the start, the Italianate music delighted with a character both militant and playful, particularly with arpeggiated calls from the trumpet and taut cymbal crashes. The orchestral tutti ended, opening the scene for Bell to enter in his first statement. Bell phrased with intentional focus and contour; each of his opening statements sounded as operatic blocks, in the bel canto style of the composition. Lyrical themes emerged as especially long, elegant phrases. The ASMF accompanied with superior command of voicing, always remaining sotto voce under Bell’s prima voce — most noticeably in a beautiful moment shared between the clarinet and violin. As the first movement proceeded, Bell’s interpretive choices immediately conveyed his understanding of the piece as a whole. Setting aside technical flashiness, Bell projected a regal impression of this concerto, one which is anything but “serious” music.

The minore section sounded with the same block phrasing as the very first entrance of the violin, in the major mode. This time, however, Bell used the rests between statements to make a theatrical scowl at the audience, emphasizing the perturbed grumpiness in the music. Bell and the band executed the subsequent quasi-recitative shakily in spots, and in the following devilish virtuosic passages one wished for more Italian fire and perturbed passion; nonetheless, what we received was quite satisfactory, even as viewed through a lens of British politesse.

The solo cadenza arrived with some intonation blunders from Bell in his octaves, which he recovered from quickly; all the greats have the adept skill of transmuting their mistakes with grace. Instead of the typical, wildly difficult, Sauret cadenza, we perhaps got to hear Bell’s own. While the Sauret utilizes sturdy construction based on the main themes from the first movement, this cadenza was more improvisatory. Themes appeared here and there, noticeably with voicing in the bass notes of bariolage passages. Bell seemed more at home and free from constraint in the cadenza, as if removing Paganini’s straitjacket for a brief repose of expressive freedom. The cadenza found its way to the characteristic trill giving way for the orchestral tutti to take over and finish the first movement. A well-deserved applause to Bell and band broke protocol.

The Adagio in b minor proved to be the most operatic of the three movements. Bell’s lyrical lamentation over expert accompaniment from the ASMF allowed for the prideful ambivalence within the music to breathe. As the movement built to a climax, with the violin soaring, the double-bass section, followed by the brass, matched with an imposing Atlas-like defiance from below. The storminess concluded with a long slide from Bell on the G string that gave way to the Picardy third from the orchestra, a landing emphasized by the brass and cymbals.

The commedia dell’arte of this concerto came through, once again, in the quick character changes from hard emotions to a buoyant charm in the finale, Rondo: Allegro spirituoso. Bell contained the innate playfulness too much for a spirited rondo that dazzles and delights with pyrotechnics, ricocheted bowings, and an overall lighthearted quality — perhaps best captured in Ivry Gitlis’s no-boundaries interpretation from the 1960’s. Nevertheless, the seriousness broke for a moment in the Rondo’s second episode, with some especially funny cadential responses from the brass section. These were thoroughly enjoyed trumpet chimes. Though the audience rose at the conclusion, no encore ensued.

Brahms’s passionately tragic Fourth Symphony begins with an exposed violin entrance which Bell led with directed forward motion in the first movement, Allegro non troppo. The burnished Brahmsian sonorities of the Academy’s composite sound resulted from their expert control of voicing, texture, and dynamic contrast. While clarity was realized, the constant forward motion robbed the Allegro too much of its emotional potential. There is something languid and emotionally complex about this greatest of Brahms’s symphonies that is too quickly missed at faster tempi. If only the non troppo marking had been justly honored. The exposition flowed into a sublime traversal of the development, which left just enough stasis before the recapitulation of the somber, passionate principal theme that eventually gave way to the bleak final coda 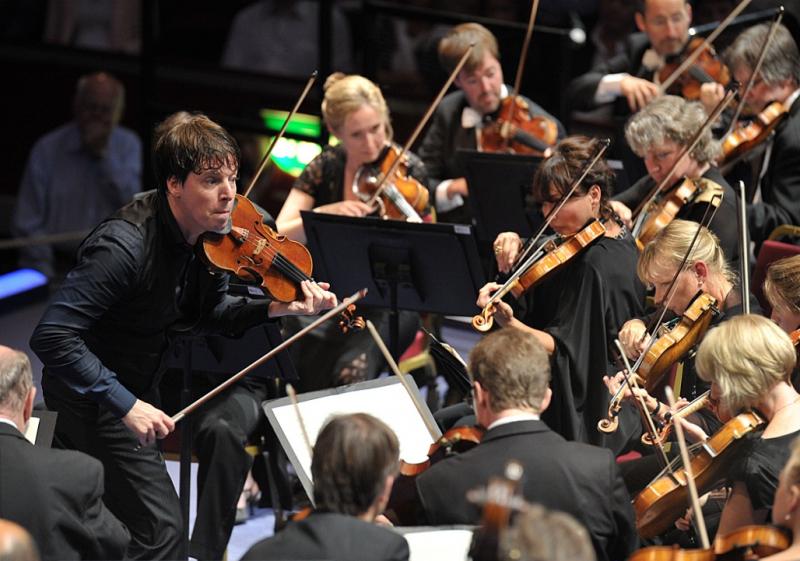 The glorious woodwind and brass soloists of the ASMF must really be lauded for their execution of the second movement, Andante moderato. The strange, almost mythic opening of repeated notes with dotted rhythms in 6/8 time exhibited wonderful sensitivity to the shaping and shading of sound among the instruments which passed around the theme. The strings carried this same quality when they entered. The minimalism of Bell’s bow, acting as his baton, worked magic here. Conducting technique aside, the gestures from his right arm (and violin buoyed in-hand away from his shoulder) gently aided the long contours of phrases, hemiolas, and the rhythmic expression so integral to Brahms’s style. The oboe expressed Brahms’s cheeky Wagnerian acknowledgement over a wildly ambiguous chord, before the composer’s own style and taste returned in a wonderfully interpreted coda.

The third movement, Allegro giocoso, began with a well-signaled upbow from Bell and the violins that introduced the main thematic material. The collective ensemble and character sounded just right. After the cozy lyricism of the second movement, the third gleamed with heroic adrenaline. The brief trio of the scherzo went by with rich lyricism from the horns and woodwinds.

The passacaglia finale, Allegro energico e passionato, started with far too much blend from the woodwinds and brass. This eight-bar statement, with its crucial German sixth chord, would have sounded far more stark had the horns and trombones been at the forefront of the texture; the tempo, far too metric, diminished the slow, apocalyptic ramping of tension necessary for each passacaglia entrance to achieve maximum effect (something one can hear in Wilhelm Furtwängler’s exemplary interpretation). The desperate pleas in the famous flute solo floated above with perfect potency, though the profound solemnity in the brass chorale lost some affect due to the tempo. During the race to the cataclysmic conclusion, Bell became distracted, trying to re-tune his violin while both attempting to play and direct at the same time. The morose ending suffered from this loss of concentration, however understandable.

While Bell kept the gusto and pace alive with this ensemble, one yearned for the sensitivity of the late Sir Neville to fight against a prevailing metric and expressive routine. Nevertheless, there was much sonorous musicianship to admire.

Comments Off on Sonorous Musicianship from Joshua Bell and the ASMF