A few music-lovers might still not appreciate how the history of opera is a long continuum that includes, some might say concludes with, musicals. Perhaps a visit to a demonic barber at Harvard from March 27 through April 4 would help set them straight, as Lowell House Opera is presenting a musical for the first time, Stephen Sondheim’s Sweeney Todd, with a 19-person cast comprising young local opera professionals alongside Harvard undergraduates and students from the classical and musical theater voice programs of BoCo-Berklee. Presented in the newly renovated Lowell House dining hall, the production will also feature a full 27-piece orchestra.

Most will know the Victorian suspense thriller yarn telling of the unjustly Australia-banished barber who eventually returns to take bloody revenge on customers whose corpses become destined for a meat-pie shop. Director Adrienne Boris notes that the company’s staging of this “musical about cannibalism in a space where hundreds of people dine every day is undoubtedly creepy, but a dining hall can also be a place of community gathering and positive change. Alongside all of the humor and heart embedded in the piece, our production has an important message to deliver to our community about the cyclical nature of violence and the danger inherent in a society that increasingly lacks compassion for its less privileged citizens.”

As part of its effort to increase its overall reach and engagement at Harvard and in the greater arts community, this is the first time Lowell House Opera has presented a show of this type, and music director Joe Turbessi adds: “Sweeney Todd is one of the greatest creations to come out of the American Broadway tradition. Stephen Sondheim produced a work rooted firmly in musical theater, but so grand in scope and so tightly organized that it approached or surpassed in quality most other ‘traditional’ American operas of the 20th century. Its dark view of humanity and the Industrial Age resonates eerily well with our time, yet despite (or because of) its macabre subject it is one of the funniest shows Sondheim wrote. I can think of no other show that would be better suited to the reopening of Lowell House.”

Sweeney Todd is stage-directed by Lowell House Opera’s new executive producer, the opera production professional Adrienne Boris, with music directed by Joe Turbessi, a member of the music staff at both Harvard University and the Boston Conservatory at Berklee. Harvard undergraduate Benjamin Perry Wenzelberg, who recently made his conducting debut with the Boston Pops as winner of the Leonard Bernstein Memorial Conducting Competition, will serve as assistant MD and conduct two performances.

Tickets are available through the Harvard Box Office online or in person in the lobby of the Smith Campus Center, 1350 Massachusetts Ave., Cambridge Mass. 02138. 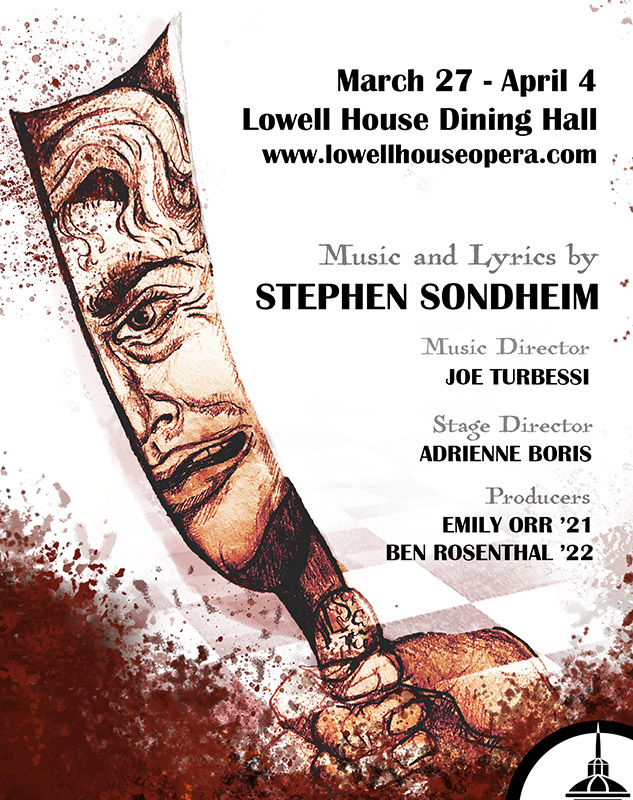 Lowell House Opera produces operas of the highest caliber for audiences from Harvard and greater Boston. The oldest opera company currently performing in New England, Lowell House Opera is the only professionally led company in residence at Harvard College and is grounded in a unique educational approach. Lowell House Opera casts some of Boston’s finest emerging professionals—many of whom are students at neighboring conservatories—alongside exceptional Harvard students, working as peers in a collaborative but rigorous environment. While the Harvard students benefit immensely from the transformative opportunity to perform in, manage, or design a professional-level production, the young professionals also grow, given the chance to take on challenging roles with full orchestra and develop as artistic leaders. Our performance venue, the historic Lowell House Dining Hall, located in the heart of Harvard’s campus, epitomizes Lowell House Opera’s commitment to enrich our community through high-quality opera that is accessible, engaging, and vital. Please visit www.lowellhouseopera.com.

Comments Off on Shave and a Haircut, with Pie