“Aren’t there any women who compose music?” People were asking this often at the time I registered as a music major at Pomona College in 1960. Of course, even then one could find many women composers listed in reference works, but it was not easy to hear recordings of their music, or live performances, and few people recognized their names. Happily, much has changed in the intervening 60 years, and most people with any real interest in music are aware of the large number of women who write serious concert music today, as well as others who write popular songs. And many know of at least a few older composers, going back at least as far as the remarkable 12th-century nun Hildegarde of Bingen.

In our time the number of active, talented, and honored female composers has risen to a very substantial number indeed. But in the centuries between Hildegarde’s time and our own, women who composed rarely enjoyed a reputation sufficient to get them discussed much in the masculine world of music. But there were a few. One of these became a frequently published and highly regarded singer and composer of the mid-17th century. This was Barbara Strozzi, whose work was featured in mezzo-soprano Sophie Michaux thoroughly satisfying recital with Benjamin Katz, harpsichord, and Paul Holmes Morton, theorbo, at the Cathedral Church of St. Paul on Friday evening under the auspices of WIM Fest, the 5th annual Women in Music Festival presented by the Boston chapter of the American Guild of Organists.

Barbara Strozzi was born in Venice in 1619 and died in Padua in 1677. She was the daughter of the poet and librettist Giulio Strozzi; her mother was Strozzi’s long-time servant, suggesting that she was illegitimate or possibly adopted. Whatever the case, she became his sole heir at his death in 1652. No doubt his work as a librettist made it easy for him to send his musically talented daughter to study with Francesco Cavalli, one of the most important opera composers after Monteverdi in Venice.

As a teenaged singer, Barbara received the dedication of two books of Bizzarerie musicali (Musical Eccentricities) by one Nicoló Fontei, settings of texts by her father. She sang these in the presence of various literary figures. By the age of 18, she was singing at the Accademia degli Unisoni (“Academy of Unisons”) founded by her father. As an indication of her intellectual abilities, she also suggested topics on which the members would debate.

Strozzi’s career was extensive, with more publications, surely, than any woman of her time, and more than most men. Between 1644 (when she was 25) and 1664 she produced eight publications containing series of vocal works (one of them, Opus 4, is lost). The first book is a collection of madrigals for 2 to 5 voices with basso continuo. Most of the remaining publications are described as cantatas or ariettas for one or two or three voices with basso continuo. Opus 5 is a collection of sacred songs. And her last two publications, from which MIcahux drew all the numbers in Saturday’s concert, are for single voice and continuo.

Born in England, and having grown up in France, Michaux now lives in Boston, where she is active in a wide variety of ensembles and styles. She is a regular member of the Lorelei Ensemble and sings with Blue Heron. She has also sung operatic roles with various companies. 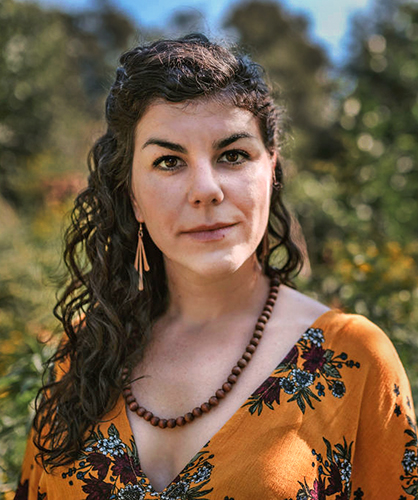 The instrumentalists played several non-vocal works to vary the program and to give the singer a break. They started with a Sinfonia a 5 from an opera, Eliogabalo (Heliogabalus) by Strozzi’s teacher Cavalli. The other instrumental pieces included work by Bernardo Pasquini, Giovani Girolamo Kapsberger, and Gregorio Strozzi (no relation to Barbara).

Strozzi surely designed the songs to fit her own vocal abilities perfectly. Since the 17th century was a period in which opera exploded to popularity in many parts of Europe, but especially in Strozzi’s Venice, it is hardly surprising that her works suggest that world. The ariettas unfold as generally tuneful strophic songs. The cantatas disclose virtually operatic scenes, often with extensive emotional outbursts. Occasionally they are cast as conversations (even when sung by one singer) of either a sad or (less frequently) comic character.

Typical of the lamenting type, the opening vocal piece: Lagrime mie (“My tears, why do you hold back?”) mourns the absence of Lidia, the singer’s love (frequently the poetry is framed to express the emotions of a man, though sung by a woman), who has died (“enclosed in hard marble”). Of course, the singer’s pain has no end. As befits a composer whose work follows from the expressive devices of the Italian madrigal, she engages in a considerable amount of ‘word painting”—musical touches to indicate especially the emotive quality of the line, often with keening chromatics, as in this first number.

But Strozzi gave herself not solely to lamentation. Mi fa rider la speranza (“Hope makes me laugh”) allows the singer to disregard worries about love’s constancy. The most amusing of the numbers performed here suggested an attempt to drive away love’s woes by singing. In L’Astratto (“The Distracted One”), the lover attempts several types of songs, with the expectation of changing depression into good cheer. The singer tries them, one after another, but either the text seems ridiculous or the music fails in its expected effect. After a half-dozen contrasting attempts are tossed aside, the comically sad conclusion is, “Thus I, miserable and foolish, not wanting to sing, have sung much.”

Michaux used her flexible, beautiful, expressive voice throughout to capture the changing moods from anguish to humor, to show off the Strozzi’s and her own virtuosity, and to capture the inherent drama with remarkable aplomb. She has planned only one take on this show in the area, but will repeat it on March 1st in Annecy, France, where she grew up, and on March 5th in Venice, where Barbara Strozzi grew up. I’m sure the Annecyites and the Venetians will welcome her warmly.

Comments Off on Michaux Impersonates and Revives Strozzi