Forty-three years ago, the violist Burton Fine and I met at a concert of the Orpheus Trio (Paula Robison, flute; Scott Nickrenz, viola; Heidi Lehwalder, harp). We had each come to hear the Debussy Sonata for Flute, Viola, and Harp. Because of this chance meeting, the violist and I ended up marrying each other and forming the Mélisande Trio with the great, late flutist Fenwick Smith; it ran for some hundred concerts. So, for me, this piece embodies many wonderful, indelible memories.

Chameleon’s intimate chamber concerts have provided great pleasure over the past several years. The acoustics in this large room, set up with little pops−style tables bearing Boldin’s chocolates and delicious chameleon cookies, supported the ensemble with pleasant warmth.

It was my joy to hear three gifted artists of Chameleon Arts Ensemble on Sunday at a Chameleon Up Close Concert (at Mary Norton Hall at Old South Church):  Chameleon’s intrepid leader and flutist Deborah Boldin, the esteemed violist Scott Woolweaver, and the marvelous harpist Franziska Huhn.

Harpists have three original masterpieces: Ravel’s Introduction and Allegro for flute, clarinet, string quartet and harp, Debussy’s Sonata and his Sacred and Profane Dances for harp and strings. Only very rarely will a flute, viola and harp concert not feature the Debussy Sonata. It’s a work of genius, and no original work following in its wake measures up to it, although several trios in recent years have quoted from it.

Of the three pieces from Suite Five of Rameau’s (1683-1764) ”Piéces de clavecin en concerts (1741), only one was among the five pieces culled from Suites 3, 4, and 5, arranged for harp (taking the harpsichord part) by the great 20th-century harpist Carlos Salzedo (1885-1961),  These make wonderful showpieces for the flute, and Deborah Boldin dispatched them—and the rest of the show—with great flair, good taste, and a ravishing sound. All afternoon Scott Woolweaver impressed us with his customary elegance. Harpist Franziska Huhn sounded simply remarkable throughout the afternoon, capturing the glistening intricacies of each moment with a control over dynamics that was most impressive. (I must admit her harp, which sounded glorious, began life as my harp, so it already knew many of the crazy pedaling spots).  I hadn’t known the first, La Forqueray” and loved it.  But the other two were favorites of ours: La Cupis and La Marais. This ensemble took both at a faster clip than I remember playing them, transforming La Cupis’s sad, lonely, haunting edge into something else entirely. Back in the days of our trio, we didn’t dare perform our Rameau pieces in Boston proper. They were considered historically (seriously) uninformed/ incorrect; I am glad that era is over. Huhn played them with exceptional clarity, color, and rhythmic verve.

Ever searching to expand his repertoire, harpist Carlos Salzedo arranged Ravel’s already-virtuosic piano Sonatine for flute, cello, and harp. Violists understandably couldn’t resist it, and it has been an important addition to their Debussy-based trio repertoire. Fiendishly chromatic, it requires 458 pedal changes. I would wager a bet that most harpists quickly pray before starting the extraordinarily difficult third movement. Salzedo (and a flutist and cellist) played his transcription for Ravel, and apparently Ravel asked “why didn’t I think of doing it like this? “Boldin and Woolweaver have collaborated for two decades, and the three had the strikingly polished and ravishing confidence of an ensemble that had done the piece a dozen times. 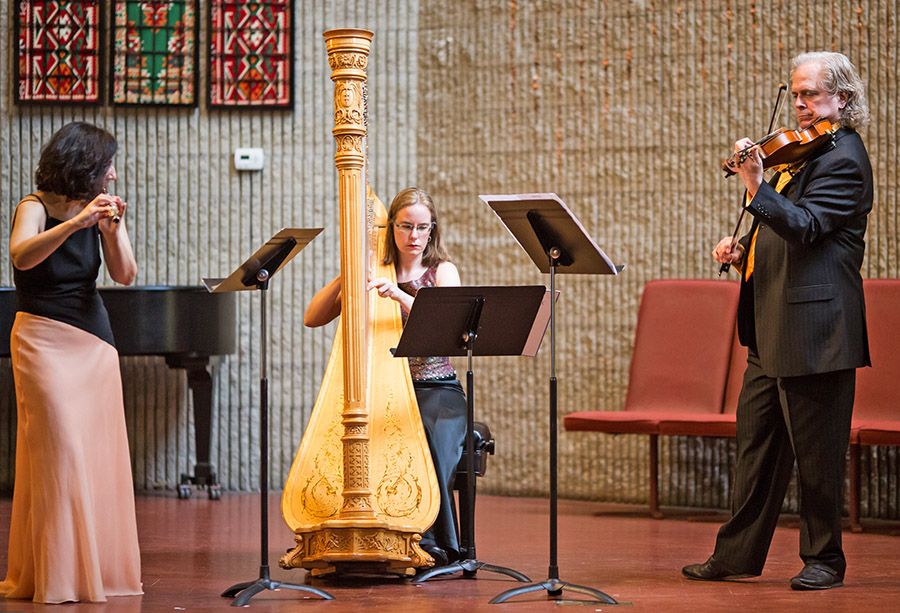 After intermission, the trio offered a rather dour 20-minute work by Sofia Gubaidulina (born 1931) that quickly became part of the harp, flute, and viola repertoire, Garden of Joy and Sorrow  (1980). Like her fellow Soviet avant-garde expatriate the late Alfred Schnittke, Gubaidulina has seized on and taken inspiration from the bleakness and stark simplicities of late Shostakovich. Her often mystical and mournful music combines the intensity of late Soviet-era composition and a feverish spirituality drawing on Catholic and Orthodox elements. Gubaidulina tasks the harp here with most of the annoying sound effects. Huhn, who has played this piece many times, moved the tuning key up and down the string, changing its pitches as it’s plucked with the other hand (an old trick), hitting vibrating low wires with a spoon, and an array of harmonics. The other two players have a somewhat easier time; the viola quite impressed with its long succession of high harmonics. Experiencing it in this excellent performance satisfied me more than the recording I had studied, but once, for me, was plenty.

Debussy’s thoroughly enchanting Sonata for Flute, Viola, and Harp (1915) imparts a sound world of color and alluring beauty throughout, starting with the solo harp’s mystical six ascending notes. One of three sonatas (the first for cello and piano, the third for violin and piano, and Sketches exist for a fourth sonata for oboe, French horn and harpsichord) the gravely ill composer wrote at the end of his life (of a projected 6, including one for oboe, horn, and harpsichord), this sonata was the first significant piece for this combination. It premiered in April, 1915 at the Société Musicale Indépendante.  The Impressionistic canvases of compositions like La Mer and Pelléas et Melisande give way to a classical abstraction through normal objects, primarily melodies. The Sonata epitomizes French clarity and refinement, emphasized by beguiling instrumental pastels. People have wondered if this unusual instrumental grouping was suggested by Debussy’s exposure to the Japanese koto and shaguhachi during the famous Paris Exhibitions.

All three players were quite spectacular, and I have not heard the harp part played with such clarity, color, and amazing dynamics. Bolden, as my harp teacher used to say, covered herself in glory. Wow. I was deeply moved.

Finally, I would like to thank and commend Deborah Boldin for the extraordinary concerts she dreams up. Most of this music (although not the Rameau for this combination) can be heard on disc or YouTube, but it is entirely different and vastly more thrilling hearing it live.

Comments Off on Glories of the Harp Trio