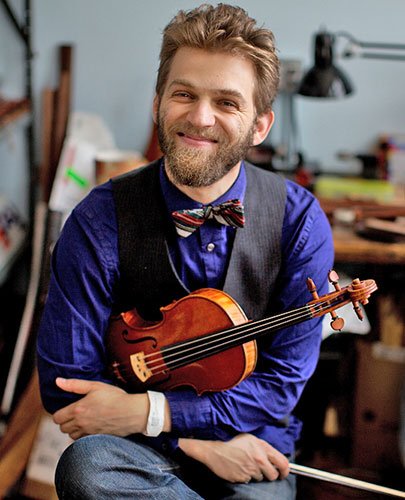 No rule book prohibits someone from playing music on an instrument for which it wasn’t originally written. But doing so invariably raises two questions: why was it written the way it was, and why change it?

On Saturday evening at MIT’s Kresge Auditorium in Cambridge, I had the joy of listening to Johnny Gandelsman play the six unaccompanied cello suites by Bach on the violin. As a cellist and composer, I tried my best to withhold judgment as to whether this would even work since the famous first prelude began an octave and a fifth higher.

The concert was anything but formal. After a brief introduction, Gandelsman walked out briskly, wearing jeans and boots. He ventured to center stage unassumingly and promptly began the first suite, now in D major. Gandelsman chose to amplify his violins, with two large PAs on stage left and right and two microphones, one with the look of an omnidirectional mic. The stage was backlit with solid colors that changed with each suite—green for the third suite, dark purple for the fifth, and deep red for the sixth.

The miking worked successfully overall,  adding some volume and perhaps a touch of reverb to a quite intimate sound. Presumably, Gandelsman would have focused more on projection if he had been playing acoustically. Two notes, the D and C above middle C, overly resonated and started to wear on me as the concert went on. I believe this was due to a lack of adjustment on the instrument and maybe exaggeration by the amplification, since it disappeared when he used a five-string violin for the notorious sixth suite.

He delivered sensitive, conscientious, personable playing in a modest manner without bravado or pretense. I would have preferred more pauses between the movements, which perhaps could have been used to bring more variety between the different characters of each suite and movement. The Sarabandes in general lacked expressivity and gravitas, particularly in the fifth suite. It’s likely a pitfall of performing them all in sequence, but at times it felt like the movements and suites blended together, almost sounding like one giant composition. This effect did, however, have the benefit of providing a comforting ebb and flow. Despite Gandelsman’s sensitivity and nuance, it didn’t take me long to discern the clear and intentional overarching approach that guided him: Gandelsman’s folk fiddling figures in his Bach.

By the fourth suite, his heel-tapping in the gigue and the stutter bowing ornamentation clued me in that this was holistically an interpretation to be considered. While at times this proved very effective for the gigues and minuets, I found the sixth suite lacking in the imagination which it especially requires for successful delivery.

The audience adored it. In the auditorium, its 1,200 seats, nearly full, audible oohs, aahs, and even some cooing could be heard throughout. Gandelsman never explained what inspired him to play the Bach cello suites on the violin, only that he had looked forward to doing so for some time. I, however, came up with a more detailed theory.

Bach wrote the suites intrinsically for the cello, or at second best, an instrument in the same register as the cello. The material he chose fits the character of the instrument itself: rustic, down-to-earth, and with an enormous tone quality. Conversely, the general atmosphere that obtains in Bach’s works for solo violin sounds much more esoteric, lofty, and conveying something heavenly, which fits its natural strengths.

So when Gandelsman plays the rustic and earthy music on a lofty and esoteric instrument, combined with an intentionally folksy interpretation, the result is rather interesting and partially explains what makes it so effective and novel. It sounded as if the violin had stepped down from its pedestal to shine a focused light on the inner working of the suites and reveal just how simple and satisfying the Bach cello suites really are at their core, despite their monumental and near-biblical status. I found this concept quite interesting to ponder; and I thank Gandelsman for bringing this different perspective to me. Gandelsman revealed something completely new, valuable and original in a charmingly unassuming manner. This modesty translated into a performance that obviously touched people’s hearts, and I look forward to hearing his future endeavors and discoveries.

Sebastian Bäverstam is a cellist, pianist and composer from Newton, Massachusetts. He will be premiering his original cello concerto with the Ludwig Symphony Orchestra in Atlanta, Georgia this coming spring.