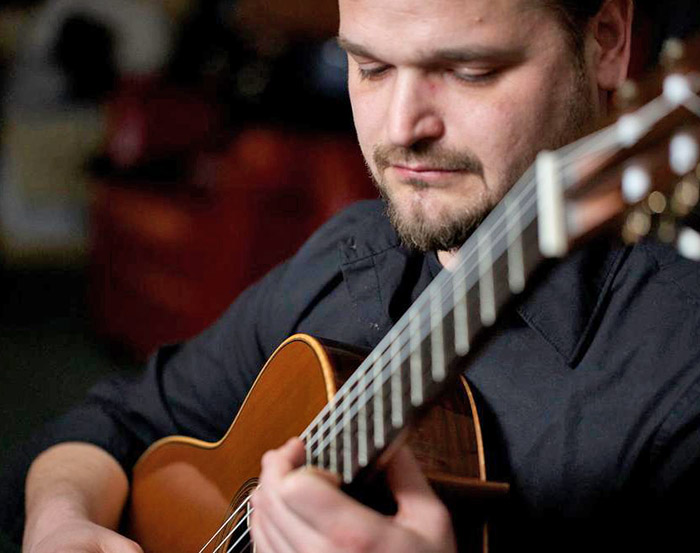 The power of Matt Palmer’s guitar swept through the chapel of First Lutheran Church of Boston like a mighty rushing wind during his February 8th appearance for the Boston Classical Guitar Society artist series. In a program that included only six selections, Palmer—a young virtuoso of the highest order—focused his attention primarily on offerings by living composers. Two exceptions were J.S. Bach’s famous Chaconne from violin partita BWV 1004 and Collecti íntim by Vicente Asencio (1903–1979).

Dispensing with classical recital formality, Palmer warmly welcomed his audience and shared insights about the first piece before sounding a note. The opener, Fantasy on “Crimson Moon” by Sergei Rudnev, elaborates on strains of Russian folk songs. The composer’s darkly programmatic score portrays an aggrieved wife taking her unfaithful husband for a crepuscular excursion in a rowboat amid increasingly turbulent waters and dispatching him. Palmer executed the work’s vigorous scalar bursts with ease and handled its lyrical sections with contrasting grace.

The concert’s first half ended the Chaconne, a benchmark for guitarists since Andrés Segovia premiered his transcription of it in a 1935 Paris concert. Palmer shared that this was his first time performing it publicly. Bach’s series of variations includes plenty of blazing scales and arpeggios. At times, it seemed Palmer took them at an extraordinarily fast clip just because he could. But his rendition was hardly empty bravado. He also gently carried his listeners through the emotional essence of this musical monument. Palmer confided during a post-concert conversation that he spontaneously added his own improvised variation at the point of modulation from minor to major.

For his second half, Palmer began with Catharsis, an intense, four-movement work by Canadian metal-influenced cellist and composer Raphael Weinroth-Browne. Palmer accurately described the music as a mashup of flamenco, cinematic, and progressive metal elements. Palmer, who played metal until diving deep into classical guitar at age 20, seemed completely at home with the unbridled thrashing energy of both flamenco and metal in the movements “Ire” and “Confusion.” “Reverie” leaned toward the cinematic with its spacious textures, introspective melody, and wandering and occasionally pungent harmonies. “Absolution” closed the suite with slashing strummed passages, brooding arpeggiations, and power chords in the coda.

The five movements of Asencio’s Collecti íntim are firmly grounded in the style and harmonic language of mid-20th-century Spanish guitar music. The Catalan titles describe moods ranging from serenity to joy to calm, to “frisança” (for which word I find no translation). Asencio incorporated idiomatic devices from tremolo to flailing rasgueados to tender melodies punctuated by pinging harmonics floating over lush harmonic progressions. Throughout, Palmer evidenced confident mastery over each mood and guitarism.

He characterized the closer, Stepan Rak’s one-movement Sonata Mongoliana, as a showcase for the extended techniques Rak has developed and borrowed for his compositions. Rak hinted at Mongolian influences with passages in perfect fourths and fifths and evocative multi-string tremolos played with glissandos up and down the guitar neck pausing once the right hand eventually reached the guitar bridge. The last minute featured all manner of raucous strumming and culminated with a final chord jab.

Following a standing ovation, Palmer returned for an encore that made for a complete change of pace. After explaining that songwriter Tom Waits has long been among his favorites, Palmer played his own highly satisfying and introvertive arrangement of Waits’s “I’m Still Here.” Palmer’s Boston appearance emphasized his stature among the impressive generation of rising young guitarists whose seemingly boundless facility equips them to play virtually anything and whose minds appear open to a limitless spectrum of music.

BCGS artistic director Charles Ewing and artistic advisor Jérôme Mouffe, among others, are to be commended for bringing Palmer and other top guitarists to Boston audiences. The society’s final concert of the season will feature celebrated Scottish-born virtuoso David Russell on April 25th. Visit bostonguitar.org for ticket information.

Comments Off on Boundless Guitar