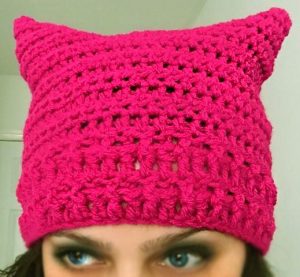 The title of Seraphim Singers’ next outing can be taken on so many levels that a conventional lede and intro would serve woefully as a précis. Thus we go straight to an insightful conversation music aficionado and historian Anne Davenport had with Boston College philosopher Eileen Sweeney into the content and meaning of the chorus’s concerts in Cambridge and Newton at the end of this month.

Anne Davenport: With its persistent commissions, its commitment to programming rare gems and its emphasis on sacred transcendence, the Seraphim Singers exemplifies the magic combination of deep groundedness and fresh sound that makes Boston, at least music-wise, so Athenian. You boldly and unequivocally dedicate your concert to Feminism. It features a combative raised fist on the flyer! Is this a new departure? What does your director Jennifer Lester have in mind?

Eileen Sweeney: Jennifer has been doing very creative ‘thematic’ programming since she founded the group 22 years ago. We don’t sing the big warhorses, but rather, a great deal of new music and lesser-known examples from all periods. Jennifer takes months working on and expanding her ideas for the season’s concerts. We have had concerts entitled “Visions of War, Peace, and Paradise,” “Oppression, Exile and Solidarity” and our fall concert this year was “Winter is Coming.” We have also done concerts around music of different periods and regions, and religious figures/symbols, like Mary, Jerusalem, and themes like creation and light. We did a concert called “Women’s Perspectives” last year which highlighted women composers but also settings of women’s poetry and stories. In this centenary year of women’s suffrage in the United States — and an election year in the era of #Me too — Jennifer wanted to showcase more women composers. Given her commitment to such a broad range of works, even two concerts is but a drop in the bucket for this repertoire. It’s true that recently Jennifer has engaged a bit more directly with issues of social justice. Our tag line, “A window on the divine” doesn’t mean a focus on the divine only as beyond, but also in the world.

Seraphim has begun developing a closer relationship to First Church in Cambridge, supporting its missions especially an outreach to the homeless. Jennifer turned to our fall theme, “Winter is Coming,” as the homeless have more anxiety and difficulty in that season. This year none of us can escape the political, and that has brought no little assertiveness to our theme of women in music. Women as music directors and composers (like philosophers, as you know) are in a real minority and I feel both joy and pride to perform this wonderful music: some ignored for centuries, some by women who are my contemporaries and some by exciting young composers like Shruthi Rajasekar, Mari Esabel Valverde, Kerry Andrew and Christina Whitten Thomas. Then, a “happy accident” occurred. Although Heinrich Christensen, our organist, has had to drop out, Louise Mundinger will be taking his place. She is herself a composer and has been a big champion of women’s music, especially pushing the AGO (the organists’ guild) to diversify its programming, not only of choral works but also of hymns and hymn texts, preludes/postludes, etc.

Your new commission, Nevertheless by Shruthi Rajasekar, shares its title with the whole concert. As a philosopher, would you help us to understand some of the subtlety of the phrase? Is a new sort of Feminism implied, focused on long-term commitments rather than solely on immediate anger? Is harnessing of anger implicit?

Actually, it’s the opposite causal connection! We had already chosen the title, “Nevertheless, She Persisted” when we commissioned a work from Shruthi. She was so taken with the title she felt compelled to turn to the congressional record to look at the origin for what has become a feminist slogan, and the result is her very complex Nevertheless., which explores both external constraint — Senator Warren was “warned” and told to “be silent” – and also the internal struggle to find one’s voice, to speak in the midst of being silenced. She also explores musically some of the different points of view, both on the original event (Did Senator Warren break Senate rules?) and the slogan itself (the words “Nevertheless, She Persisted” were not a woman’s but Senator McConnell’s censuring of her speech, so should women take it up as their slogan?). The solo quartet in the piece takes musically different perspectives on the event and its meaning. For me, maybe less as an individual philosopher than as a woman in the field of academic philosophy in which women are vastly underrepresented and which has had many high profile and troubling cases of sexual harassment, the message to persist, to continue “nevertheless” is a helpful and hopeful one. Momentary anger — which I don’t think has ever characterized feminist thought, – though it is sometimes heard that way as a kind of projection and fear – isn’t enough to bring about transformation. I remind my students, as I remind myself, of the many years and painful sacrifices the big changes in civil rights have taken and, as we are sharply reminded today, still require of us. The only option is to continue, to persist.

How do the other works that are featured in the concert create a context for the Feminism of Persisting?

A kind of dialectic between the ‘timely’ and the timeless struck me when I looked at the pieces together. Shruthi’s obviously is set in our present political situation, but so is Mari Esabel Valverde’s Border Lines, a gorgeous response to the brutalities of our present immigration practices, but both also look toward “the long arc of history.” The yearning to transcend boundaries in Valverde’s Border Lines, is picked up by Patricia Van Ness’s setting of Psalm 31 (In you have I taken refuge) where the voice parts pass the melody from one to another, ideally in seamless cooperation. Edie Hill’s There is no Age and Margaretha Christina de Jong’s setting of Psalm 23 both break into six- and eight-part harmony that feels like being drawn up into heaven. We get a respite and a glimpse of a better and safer world.

In choral singing we experience connection, cooperation, and trust with the body and voice. Kerry Andrew’s O Lux and Nevertheless provides aleatory passages where choral singers have to go against their training to enter randomly and on their own; it’s scary and beautiful and feels like being asked to speak up against a crowd. I’m not sure if it’s connected to the fact that these are women composers, but many of the pieces reflect on singing as a symbol for participating in collective action. We pass the baton, we enter the fray at different times, we are sometimes the melody, sometimes the harmony or the drone foundation. But we are all given a role to play and get our chance to shine. It’s an experience of a kind of ideal community, escaping the opposition of oppressor and oppressed.

As you recall, John Locke speculated whimsically over some “spiritual beings” who likely possess higher knowledge than we do, based on a more acute and exquisite sensorium (Essay Concerning Human Understanding, Bk. IV, c. III, 27). Has your active participation in singing with The Seraphim influenced your work in philosophy over the years?

Aristotle and Thomas Aquinas also thought something along these lines, that the most intelligent people have highly developed senses, but as a historian of philosophy, I am not at all convinced of any of that! The way Jennifer programs from early periods to this very moment in time—often within a single concert—gives me a chance to experience those transformations. I also work in the philosophy of language with a special interest in the problem of theological language. Religious texts are trying to name the ineffable and the musical setting adds another dimension to saying what cannot be said. I have become interested in questions concerning the body and the emotions, and Western philosophy’s long history of undervaluing both is disturbing. Singing is an antidote. Like dancing, singing is the expression of embodied spirit, neither just body nor just spirit. Hence its beauty and our vulnerability. It’s salutary and rebalancing to participate in a community of singers and to have Jennifer Lester engage the whole person, head and heart, mind and body. Recall that Bach’s Goldberg Variations employs these trinities of body, mind and spirit! I think Jennifer engages the audience on all those levels as well.

Thank you Seraph Eileen (Professor Sweeney) for sharing these thoughts with us on behalf of your fellow Seraphs. What a richly complex precis of a promising-sounding concert.

Comments Off on “Nevertheless, She Persisted”