The glam Deutsche Grammophon duo pianist act of Lucas and Arthur Jussen extends the once-popular 19th-century domestic genre into a highly rewarding 21st-century package, both musically and theatrically. The young Dutch sibs can’t help that they look angelic, nor probably can they avoid telegraphing total immersion and heavenly inspiration. Their deep affection for whatever they are playing shows in swoons and soulful glances that might appear vaporous if not for those lustrous tones and devoted musicality. Their affection for each other in rapturous curtain calls and intimate hand and arm crossings prompted me to ask them in the receiving line if they ever fight. “Do you have a brother?”, Lucas wondered, …“then you don’t need to ask!”

Their Gardner Museum concert on Sunday afternoon found them in generously outgoing form, making strong connections with composers (they had memorized virtually all the works) and the entranced crowd. They drew lapidary luster from the Gardner’s Steinway in Mendelssohn’s Andante and Allegro Brilliante. Whether in fairy music or the moderately martial bolder statements, they reveled in the safe and reassuring refinement of that early romantic muse. The brothers always moderated their prodigious octaves and scales, simultaneity of attack and technical rigor, with innig limpidity.

Schubert’s Fantasy in F Minor, an undisputed piano duet masterpiece, takes us into the deepest well of resignation, nostalgia, and repose; it glows with the best of what the human mind and fingers can conjure, yielding some of the saddest and happiest music ever written. The Jussens davenned deeply into the keyboard during Schubert’s distress, and as the composer’s clouds parted, these paired Apollos carried back the sun. Every interpretational gesture seemed judiciously considered. Luftpausen and perfectly plastic phrases retained qualities of spontaneity and fantasy in this reference traversal. What a pity it just stops.

Hanna Kulenty (b. 1961), a Pole long resident in the Netherland, composed Van (2014) to “accompany the King and Queen of her adopted country.” It opens and closes with quiet wandering chord progressions. In between it motors on for about five minutes in a Villa-Lobos meets Philip Glass manner with bumpy roads and lots of hand crossings. It didn’t overstay its welcome before fading into the mists.

Lucas and Arthur set up Turkish pianist-composer Fazil Say’s Night, which they had commissioned in 2017, by warning us the it had to sound loud and ugly. The fact that authorities had forbidden its listing on a program in Ankara only stoked expectations for something disruptive or patriotically democratic. They played it in Ankara as an encore where it was heard as testament to freedom, though hardly in the Randall Thompson mode. Conflict abounds in the work; an idée-fixe in the bass contends with ephemeral ideas trying to emerge from higher ranges. There is some dancy stuff redolent of Sharks v Jets, some Janissary battles that drew little blood, and some particularly interesting extended effects of strumming and thrumming. We were glad to be in a position to see what was going on under the lid.

The piano made an about face for the second half to offer its frontside to those Calderwood Cube dwellers who had earlier faced the long, black, raised lid. We didn’t mind having the blast aimed across the hall, since the Stravinsky’s Rite of Spring in this 4-hand version loudly proclaims the piano as a percussion instrument.

Flipping the piano posed one possible solution to dealing with a uni-directional instrument in the omni-occupied cube. During the formative years, Director Emeritus Scott Niekrenz decreed that piano would appear topless. The resulting defusing, democratization of sound pleased some of the people some of the time, but a piano never sounds its best without the focus provided by the lid. So, I suggested an experiment to Scott, and his successor, George Steele. How about a lid made out of plexiglass to allow for maximum visibility, but perforated like Swiss cheese to allow half of the sound to diffuse? Have a look at the examples HERE. 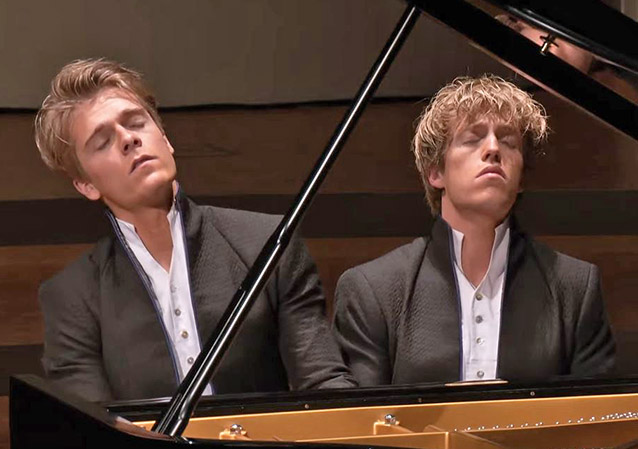 One can think of the piano duet version of Le Sacre as a pianistically lesser creature than the composer’s virtuosic piano solo treatment of Petroushka, but this Rite also provides much more than a literal translation. Mark DeVoto wrote on these pages in 2008 [HERE].

It is endlessly interesting to study The Rite of Spring in the piano-four-hands score side by side with the orchestral score. Robert Craft’s book says that Stravinsky wrote out both scores at the same time, which accounts for some interesting discrepancies. (The alto flute part, for instance, includes twittering figures in groups of ten 32nd notes; in the piano score, these groups have 12 32nd notes. Why?) One can get a good idea of what details Stravinsky thought were most important, and what was less important — those chromatic scales I just mentioned, for instance, are left out of the piano score.

Most of all, though, what one appreciates in scrutinizing the piano score are two most important elements: what is fundamental rhythmically, and what is fundamental harmonically. The climactic part of “Spring Rounds,” for instance, uses the full strength of the orchestra ff in chordal layers, with crushing dissonance (including the trombone glissandi – “the vomit,” my teacher, Lukas Foss, called these); but in terms of harmony, one sees how directly Stravinsky must have worked this passage out at the piano, with a purely triadic upper layer, a simple ostinato in parallel fifths in the bass (fortified by tamtam and bass drum), and a third layer in the middle of the texture, of parallel inverted-ninth chords. It’s not in the least atonal; indeed, it is all the more piercingly dissonant because it is tonal. There’s a five-flat key signature, and you can say that it grows out of E-flat Dorian harmony. (The whole section is preceded by six bars with a four-flat signature, over the E-flat trills in the flutes. Why this four-flat signature, I can’t imagine. In the sketches, at the repeat of these bars, the signature has only two flats – another mystery.)

After the duo’s soulful account of “The Augurs of Spring,” militant tattoos of savage rhythms and polyamorous cluster-whatevers…(-chords, that is) ensued, giving irresistible force to the “Dance of the Earth” and the concluding “Sacrificial Dance.” In this two-man deputation for a large orchestra and corps of dancers, testosterone triumphed, and superior endurance earned every lyrical afterglow. As a bonus, we had pianists enjoyable to watch. Their conjoined hands and arms summoned a Swan Lake pas de deux, and their highly mobile and expressive heads, faces, and shoulders moved almost balletically.

A cheering crowd refused to leave before Arthur and Lucas complied with a consoling and aptly titled encore, a portion of Bach’s Cantata 106, Gottes Zeit is die allerbeste zeit in Kurtag’s four-hands arrangement. This reviewer certainly had the best of times.