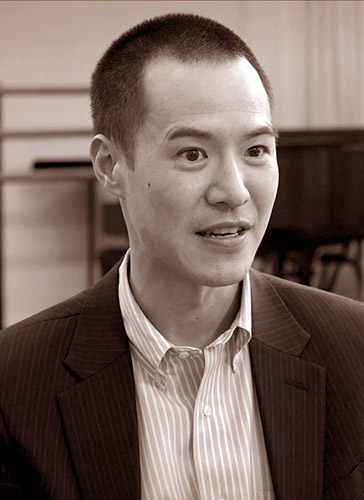 On a YouTube video about his teaching-philosophy at Juilliard [HERE], violinist Joseph Lin spoke about the subjectivity of time: “You can actually do something about the perception of time. To have an audience forget about the passing of time or to sense that time has passed somewhat differently in the course of a performance than it did before and after. That means you did something very, very powerful.”

The amazing Joseph Lin honored the 300th-anniversary of J. S. Bach’s six sonatas and partitas for violin solo by playing them all in a single evening’s span with but a 20-minute intermission at Jordan Hall on Friday. Although Lin had been first violinist of the Juilliard String Quartet from 2011-2018, and had toured with Music from Marlboro, he had somehow slipped underneath my radar. And despite reading of his many prestigious awards, and seeing quite a few enthused musical luminaries in the audience, and knowing how the Chinese Foundation for the Performing Arts, with Dr. Catherine Chan at the helm, has been presenting stellar musicians for three decades, little had prepared me for this extraordinarily powerful Bach recital.

Dressed in black slacks and a dark brown Chinese-style shirt, Lin stood, without any music, moving very little, in his own forcefield, with the resonant hall his perfect collaborator. From the opening of Bach’s Sonata No. 3 in C Major, he held our complete attention, and, yes, for the next nearly three hours, we forgot about the passing of time. It flew by, luring us into a powerful trance. Indeed, throughout the six partitas and sonatas, time entered a magical realm. Without ever calling attention to himself, Lin let us hear these pieces most of us knew rather well, as if for the first time. Everything sounded just right.

This concert felt special to me for several reasons. This was the 200th review I’ve done for the Intelligencer, and in ten years, I had heard the set in single spans only three times; furthermore, harpists like me have plumbed and transcribed these sets for études and concert pieces to various degrees of success. Perhaps because I am ten years older since I first appeared in these pages, I don’t take it  for granted that this top-drawer Bach will come across brilliantly, but Lin’s exquisite account was, IMHO, as good as it gets.

Especially after a brutal week of non-ending, in-your-face bad news, listening to Lin play these gems felt like being visited by beloved old friends, wearing their Sunday best, leaving their saucy drag wardrobe of transcriptions behind for another time.

Several qualities struck me about Lin’s playing and demeanor: his passion and poise, his calm centeredness, his grace and his gracefulness—an alchemy of fireworks and almost surreal tranquility. Worldly cares fell away in this rarefied prism of magisterially played Bach. Yes, I could point out there were a dozen exceptionally played movements, and add that, unsurprisingly, the D minor Chaconne which ended the program cast an amazing spell, but I think, at this point, the reader gets the idea: Lin delivered an exceptionally beautiful evening of  Bach with superb taste and crystalline musicality.