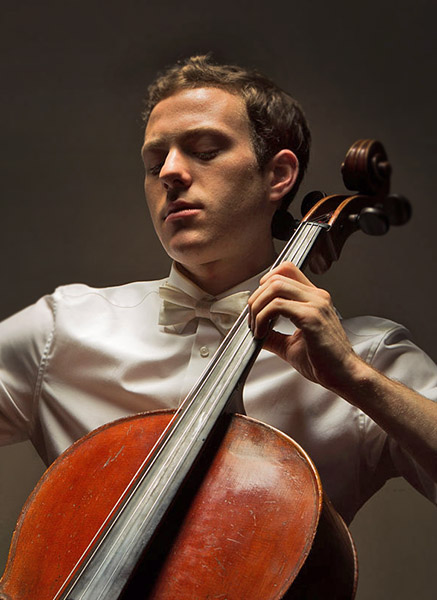 On a particularly damp, gloomy, and quickly darkening Sunday afternoon, an audience huddled up front in the spacious St. John’s Episcopal Church for a moment of respite and warmth. In “The Voice of the Cello,” cellist Joseph Gotoff and pianist SangYoung Kim explored Romantic and late-Romantic tropes and impressions from vocal and vocalise transcriptions. Clearly thoughtful intention informed selecting and organizing the 19 individual songs into four natural scenes; the resulting balanced form in toto allowed for reflection and a venture into the simply alluring qualities of the cello.

Covering the gamut of Romantic expression, from Brahms and Schumann to Debussy and Rachmaninoff, each work conveyed in brevity an individuated mood, setting, or color.  The first of four scenes centered on the dream-state and included songs by Sibelius, Fauré, and Rachmaninoff. The ideal of clarity developed out of the Fauré’s Aprés un rêve and continued throughout the program: That diction, enunciation, and articulation is just as powerful and indispensable in a cello recital as in vocal recital for conveying the embedded emotive-musical thought. Before the brief pause, the atypically brisk momentum of Rachmaninoff’s Vocalise again placed simplicity, clarity, and lightness above indulgent yearning.

Transitioning to the lighter second scene with works by Dvorak and Elgar – a less significant Op. 55, No. 4 and suave violin piece Salut d’amour, respectively — Gotoff’s own transcriptions of the three selections from Mendelssohn’s Songs Without Words stood out for their contrasting moods, with the first up-tempo tableau, “Lost Illusions” (Op. 67, No. 2), the strikingly hopeful “Elegy”  (Op. 85, No. 4), and the crisp bouncy Op. 85, No. 6 in B-flat, which highlighted the natural relationship between soloist and accompanist. The duo could have achieved more energy and illumination by foregrounding the more important declamations of the pianist.

With an audience so familiar with La fille aux cheveau de lin and Beau Soir, Debussy’s impressionist ideals became readily apparent, as luminous hues peak through the typical cloudiness. Corresponding to the ashen skies surrounding the church, the interior architecture assisted in obscuring the relationship between the performer and audience member which both created an opportunity for self-reflection with a simultaneous feeling of distance. The simple iconic melodies of Debussy with not-so-memorable Chausson and Scriabin works surrounded the most captivating moment of the recital, as the rich palette of Lili Boulanger’s Reflets exhibits the colorful harmonic potential of the Romantic song form. This arrestingly beautiful music ebbed and flowed with chromatically-accented progressions and alluded to the elaborate Symbolist imagery of Maurice Maeterlinck.

Love songs of our Romantic titans: Schumann, Schubert, and Brahms concluded this plaintive afternoon. Melancholic yearning and elaborations to the original melody revealed violinist Joseph Joachim, the 19th-century “new music” advocate, to be the transcriber of Robert Schumann’s Abenlied, Op. 85, No. 12. SangYoung Kim intuitively navigated the phrasing of Schuberg’s Ständchen, imbuing each note with the purpose of either looking forward or remembering the past. Like a versatile tenor, Gotoff  returned focus to the capabilities of the A-string in Brahms’s Die Mainacht, Op. 43, No. 2: The accentuation of subtle texture changes on the highest string transmogrified between purity and lightness, projecting richness, and the shades in-between—surely a refined feat. Cellists would have much to gain with in this collection of songs as a study on the A-string.

Gotoff, an emerging artistic voice and educator in the Boston scene, imbues erudition with clarity and an approachable sensitivity. His sui generis virtual song-cycle connected the four scenes with pure expression and subtle intra-musical narratives. After reflecting that the show could serve as apt material for a recording, he confirmed his intent to do just that, and to celebrate the assured and sensitive voice of his instrument. Including texts in the program would have enhance the evoked some of the deep poetic meanings that the cellos voice could only imply.