The Opera Studies Department of the New England Conservatory mounted an effective and fascinating production of the opera that had put Dominick Argento on the map in October 1971. By that time, he had already composed a number of operas, starting as a student and continuing virtually without break for the remainder of his life (he died last February 20 at the age of 91). But after its Minneapolis premiere it went quickly to New York and overseas, and it remains his most frequently performed opera.

Watching and hearing a performance of Postcard from Morocco in NEC’s Plimpton Shattuck Black Box Theater Friday felt surprisingly similar to seeing Samuel Beckett’s Waiting for Godot. In both cases the work involves a stage that is essentially empty, populated by group of people who are waiting for something, and who essentially fail to communicate during the period of their waiting. John Donohue’s libretto for the opera consists essentially of disconnected comments or questions passed around among the seven characters with singing parts (there are also two mimes). The individual participants comment, but not with any evident link to what has gone before. Each character is carrying a particular piece of luggage and describes what is in it—but without showing it, even if another character asks to see it.

In shaping the opera, Argento chose to cast singers of seven vocal and personality types among whom he divided the lines of text. None of the characters has a name; they are all identified in the program only by voice type (though we learn the name of one during the course of the opera).  The NEC production was offered four times, with alternating casts.  I heard the second performance, in Friday, and I will be talking about the singers who appeared then, but I will list the names of those who alternated the first and third performances in parenthesis to give them their due credit.

The stage directions offer enormous leeway to the designers. Cristina Tedesco’s set design contained just enough elements—a luggage cart, a few boxes or other places to sit, broad entrances at the rear, presumably to the train platforms—to suggest a railroad station but without specific elements to identify a specific location. Karen Perlow’s lighting design basically suggested the emptiness of a large vacant public space, but also highlighted individual singers’ and dancers’ moments of significant activity. Brooke Stanton designed costumes stylish and elegant enough to suggest an era when people traveled by rail rather than by air. One delightful touch: Despite the opera’s title, nothing in the libretto or on the stage to indicates a setting in Morocco. But the orchestra, which entered from the wings and descended via a long staircase to the pit, also wore costumes: Everyone wore black pants, a white shirt with a highly decorated black vest and a maroon fez, closely suggesting an ensemble visiting from Morocco!

Joshua Major took advantage of the relative spaciousness of the black box stage to set the singers apart from one another, living in their own separate space, except when one of them tries to engage another in conversation, or when things get wilder toward the end. And when the musical set pieces begin (a song in an unidentifiable foreign language by the soprano, an operetta duet by the coloratura soprano and the lyric tenor) or when the mimes dance or fight with each other (comically, like something out of the commedia dell’arte) or with some of the passengers, their actions are clearly made the focus of activity while the others pay no attention.

The most important “plot” element comes when the tenor (Mr. Owen, as we learn) reveals that he is a painter, and the others assemble for him to paint a group portrait. But this becomes a scuffle that causes his paintbox to come open, revealing that it is empty. This is a moment of shocked silence. The bass becomes a puppet maker, who evidently lives in the station, and who tries to turn the lyric tenor and baritone into puppets. 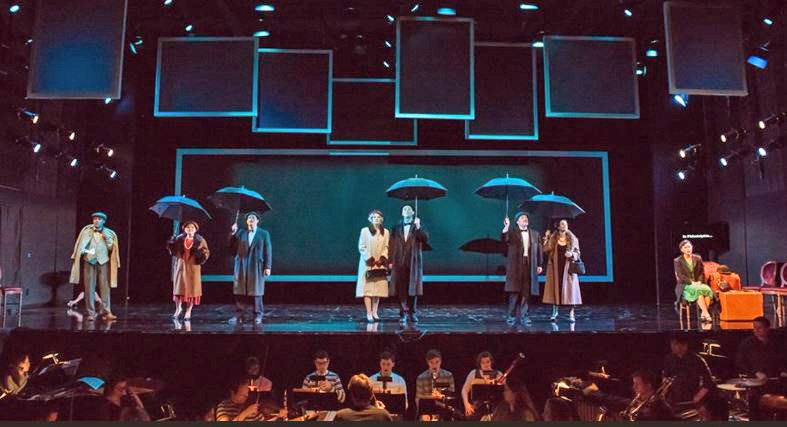 Mr. Owen, meanwhile, sings and extended account of a childhood dream he had of sailing away in a ship of “glass and ice.” He and the male mime turn a luggage cart filled with suitcases into the “ship” with a makeshift sail, and he goes off to the world, escaping from the puppeteer and the others. As the opera ends, the remaining passengers drift back onto the station platform, each one now holding the piece of luggage that had belonged to another person at the beginning of the opera. Mr. Owen has escaped. The others wait.

The production completely satisfied musically and dramatically. The orchestra, with its active, varied, and complex role assigned to a small number of players, sounded exceptionally fine, and Tweten’s pacing of the score enlivened everything onstage. I can’t resist commenting, too, on the entr’acte, an orchestral number identified by a sign posted onstage as “Souvenir de Bayreuth.” Chabrier had assigned that title to a hysterically funny piano four-hands piece that turned the “endless melody” of Tristan into a popular dance form, a quadrille. Argento’s Wagnerian parody develops differently, but served quite delightfully as a change of pace.

Every seemed inevitable for his or her role, both vocally and in terms of movements (such as the operetta duet, or the with byplay of the mimes). But the dramatic highpoint came when Mr. Owen chose to act, to sail away on his own. Tenor David Rivera-Bozón dominated the close of the opera first with an extended “biographical” aria in which he explains the dream that has haunted him since childhood, and then with the energetic preparation of the boat on th luggage cart, on which he sails away.

Having heard one cast, I was immediately ready to hear the other, and to enjoy this 90-minute one act opera, mysterious, witty, moving, and surprising all over again. Bravo to everyone involved.