By now many of us Greater Bostonians have heard Harvard University’s Blodgett Artists-in-Residence, the Parker String Quartet (Daniel Chong and Ken Hamao, violins; Jessica Bodner, viola; and Kee-Hyun Kim, cello) and have come to expect and appreciate their well-honed and oft-inspired playing, as well as their intelligent programming. On Sunday those fortunate enough to have come out in the first flakes of snow to hear the group at Paine Hall, enjoyed a magnificent concert, in which Mozart’s Hoffmeister quartet, Leon Kirchner’s first string quartet and Schubert’s “cello” quintet fit together well. And the group clearly took inspiration from the music, the venue and the audience.

Mozart has often been described as a journeyman composer, writing music as needed and as he could cobble together commissions. He wrote his String Quartet in D Major K.499 in 1786. Franz Anton Hoffmeister, a performer-composer who went into business first to print his own work, but parlayed it into the house that published not only much Mozart but also others, including Haydn and Beethoven. Hyperion liner notes by Peter Holman from 1991 inform, “the ad for the initial printing state that the piece was written ‘with that fire of the imagination and that correctness which has long since won for Herr M. the reputation of one of the best composers in Germany’.” From the initial descending arpeggio opening of the Allegretto to the last of the fourth movement Allegro, the Parker quartet provided a clear and lyrical rendering. In the Menuetto, they charmed with the ease of the first statements and then the darker segment of the Trio. The Adagio as conveyed a depth of sorrow with sweet tenderness, with the plethora of complex contrapuntal statements set forth clearly but lightly. The ensemble seemed to enjoy the martial tone in the playful concluding movement.

Leon Kirchner’s String Quartet No. 1, from 1949, when he was 31, pays homage to Bartók, whose influence appears easily evident in its accessible, yet intellectually stimulating range. Kirchner acknowledged Bartók’s impact and wrote that he divided the initial Allegro ma non troppo into four sections in which the first sets out two themes, the second contrasts them “harmonically, metrically and structurally,” while the third recalls the first section and the final portion recapitulates and includes a coda. The Parkers in doing the first movement echoed both Kirchner’s early style and recalled Bartók. The Adagio wafted with fine intent, and the Scherzo entertained. The last movement recapitulated the early portion both of the movement and the entire quartet—and executed here with panache. 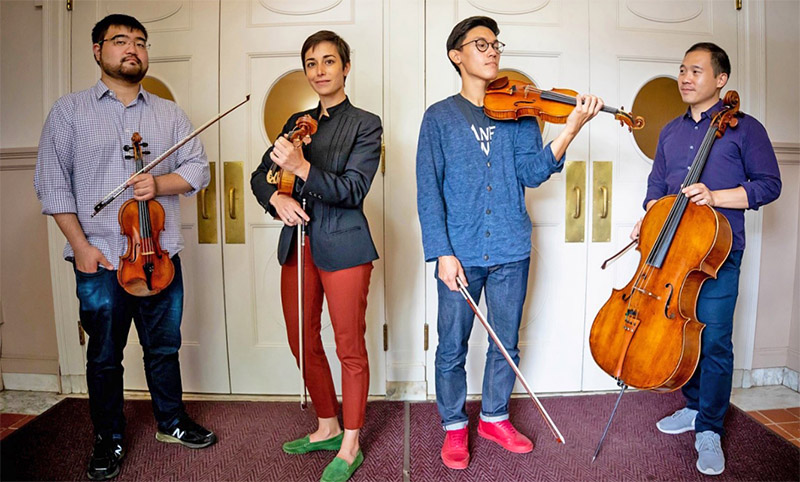 Thank goodness Schubert could complete his sublime “cello” quintet in C Major in 1828, just weeks before exiting this orb. The publisher to whom he sent the piece declined it, and so it was published posthumously—and not performed publicly until 1850. The work has inspired many with its innovative addition of the sonorous heft of a second cello—this time the impressive and accomplished Canadian cellist Roman Borys, who joined the Parkers for an exquisite rendering. Daniel Chong’s incisive phrasing and emphatic delivery empowered, yet he also inspired delicate yearning at times from all his colleagues.

The first movement, Allegro ma non troppo is the longest, with dense harmonies, starting from the dynamic expansion of the initial C-major chord to a diminished 7th, followed by the soul wrenching melody of the first theme. The interplay in the elegant Adagio allowed each musician to savor moments of incomparable soul. And in the Scherzo, the hunting horn calls via strings reminisced of lively events, while they acted as voices in the trio cum chorale. The final Allegretto had everyone dancing in spirit. Borys’s face mirrored each poignant phrase, and the entire group seemed transported, as did the audience.

I’ve attended countless concerts in Paine Hall over many decades, and this one was the most sublime I have ever heard—creating not only a technical triumph but an emotional high.

Comments Off on Parkers (Plus Borys) Splendid at Paine