Last night at both 8 and 10, Renaissance Men’s “On This Island” filled the Parish Hall for Late Night at Emmanuel. The hour-long concert explored the music of those islands to the West of the European continent in settings ranging from traditional to art-song.

In 2014 RenMen developed from Boston’s deep roots in early music and quickly expanded to push generic and chronological boundaries. From six singers, the ensemble has expanded to encompass those based in New York City and north; currently its roster numbers 14 according to its Website. Known for  concerts, collaborations, and recordings, Renaissance Men retains the strengths of  a capella early music groups while mastering social media, lighthearted presentation, and playful fun to enliven events and audiences. This is especially obvious in the Men’s Christmas shows, including next month’s performance to be recorded live. Last night’s appearance spun together all of these threads: the cabaret mode of Late Night at Emmanuel coupled with Cornish Pasty Co. Boston morsels and libations made for a British bonanza.

The varied program ran attacca, showcasing the range and diversity of the ensemble. The nonet included Thomas Dawkins on piano (and bells), with different solos and smaller ensembles over the course of the hour. Showcasing traditional songs both as setting and as inspiration, the concert began with tenor Ethan DePuy walking in singing the traditional Irish “The Last Rose of Summer” (words by Thomas Moore, late 18th to first half of 19th centuries). The assembled voices then launched into Michael McGlynn’s “Dúlamán” (a contemporary setting of a traditional Irish song about seaweed, hence the Gaelic title). Next “Guernsey,” a traditional Channel Island folk tune, featuring tenor Eric Christopher Perry, text in a French patois. Bairstow’s “Music, When Soft Voices Die” led to Granville Bantock’s “My Luve is Like a Red, Red Rose” for quartet (Garza, Mooney, Perry, Prapestis). All voices returned for Holst, “I Love my Love” while Prapestis took the lead in Vaughan Williams “Ca’ the yowes” (1922, setting a song collected by Robert Burns in 1794, meaning “call the ewes to the hills”). Baritone Brian Church followed with the traditional Shetland Islands “Saa you me Maggie” then Kilian Mooney, tenor, in Britten’s arrangement of “The Salley Gardens.” A septet of singers offered Britten’s “The Ballad of Little Musgrave and Lady Barnard” then Benjamin Pfeil, bass, took us on “The Rocky Road to Dublin.” Next to the Western Isles with “Martyrs,” a Gaelic psalmody setting of Psalms 79:11 (the curious can listen to this recording from the Isle of Lewis to get the flavor of this piece). Welsh composer Paul Mealor set the Metaphysical poet Henry Vaughan’s “I saw Eternity” for choir of voices and soprano saxophone (Will Prapestis, doing double duty). Remaining in Wales, Anthony Burkes Garza, bass, gave us (in English) the nineteenth century David Charles’ “Lief – O Jesu Mawr” followed by the full ensemble in Hilary Tann’s “Paradise” (a setting of George Herbert’s famed poem). The evening concluded with Peter Schilling, baritone, soloing in the traditional Irish “The Rare Auld Mountain Dew” and the group in Tom Anderson’s arrangement of the traditional Scottish “The Parting Glass” (which in this setting has another life in the video game Assassin’s Creed IV). 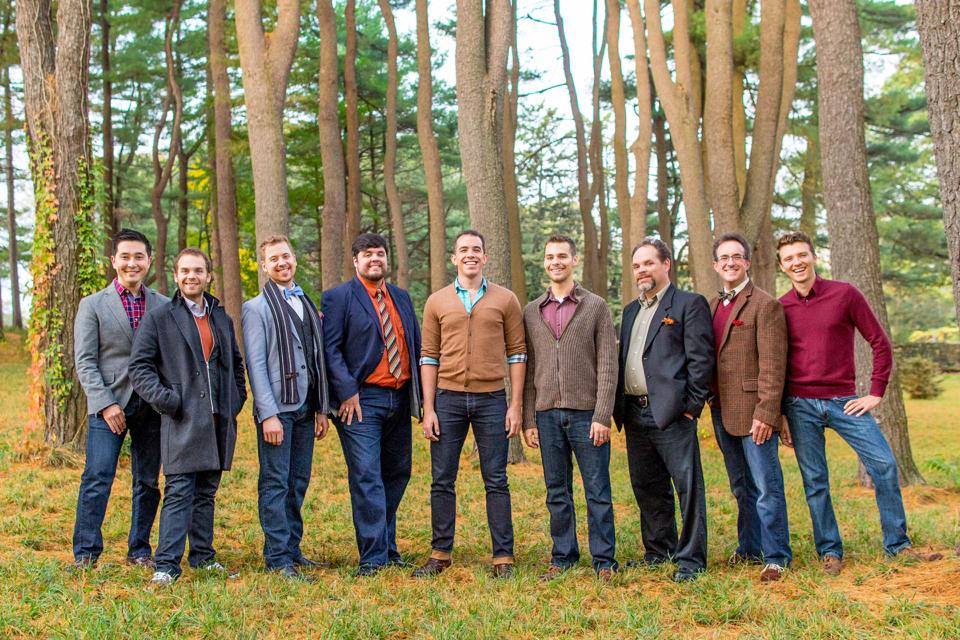 This smartly curated show changed dynamic, affect, and emotional freight to take the audience on a structured journey. It also effectively explored the interplay among traditional songs and artistic settings thereof. The drama of Little Musgrave and Lord Barnard acquires greater drama in Britten’s composition; similarly, Holst intensifies the inherent narrative tension in “I Love My Love.” McGlynn offers a more artistic, strongly rhythmic and compelling, take on a West Ireland seaweed song. “Martyrs” includes melismatic vocal lines recalling the pinnacles of Gregorian chant yet here in a Protestant covenanting vein that flourished in remote communities long past the standard historiographic sell-by date usually given. So old as to be fresh and new again, this is a revelation. Tann’s “Paradise” is a gorgeous exploration of Herbert’s text combined with the Latin verse from Psalms 95:9, and a garden of musical delights in its own right. While Herbert may prune for rhyme, Tann embellishes, expands, like blossoms opening. The whole evening is a compelling argument for the interconnectedness of traditional and classical music, the ways each enrich the other.

From Renaissance Men as performers one heard all that one expects—fabulous blending of voice, tight ensemble, joy and play executed to the highest standard. Schilling skillfully embodied the wit and fun in “Mountain Dew.” In Britten’s “Salley Gardens,” my favorite solo number, Kilian Mooney’s expressive voice and the musical setting harmonized perfectly. Of the ensemble pieces, McGlynn’s “Dúlamán” vies with “Martyrs” and Tann’s “Paradise” as a most gratifying discovery.

My biggest bafflement comes from the title “On This Island.” That combined with Britten’s name on the program led me to expect his opus 11 song cycle, an early work with texts drawn from W. H. Auden’s 1936 collection, Look, Stranger!  (published in the U.S. in 1937 under the poet’s preferred title, On This Island). None of those five settings from the eponymous cycle appeared among RenMen’s selections.  The point of connection seems to be more in the vignettes presented by Britten and the similar spotlighting approach to island music portrayed here. Far better would be to entitle this performance “On These Islands,” given the wealth and diversity of tradition and location, dialect and accent, language and idiom, explored. We heard more than just music from what is (still; nominally; barely?) the U.K. I would like to see that range captured in the billing as well as the singing.

We hope this concert repeats in the Boston area. Go, listen; you won’t be disappointed.

Comments Off on Late-Night Date With Renaissance Men