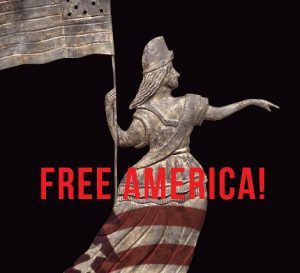 OK, Anne, you need to come clean. Boston Camerata’s November 8th Americana concert and CD celebration at Faneuil Hall seems to have a strange French accent on its Harmonia Mundi label. Do I detect foreign collusion?

Anne Azéma: (laughs) It’s certainly significant that there is so much interest abroad in a collection of very old American broadside ballads, fife and drum tunes, and patriotic calls to resistance of autocratic rulers. When we performed “Free America” at the invitation of Strasbourg, Boston’s sister city, three weeks ago, there wasn’t an empty seat to be seen in the Palais de la Musique et des Congrès. And the audience, including plenty of younger people, joined in loudly on the saucy refrain to “Yankee Doodle.”

I think that here at home we underestimate to what extent people in other countries celebrate and cherish that lofty “American Dream.” Right now people want to know if it still exists. Are we still n exceptional a role model for other lands? When we sing American songs of resistance and rebellion to a foreign audience, we are sending a message of reassurance about our beliefs in our homeland. Strasbourg is Boston’s sister city, thanks in large part to Charles Munch, and we continue to share something mutually important with its citizens.

Will you be singing and protesting about current events the way patriots have for two centuries at Faneuil Hall?

Well, yes and no. These beautiful, historical musical works make direct references to events that took place centuries ago, in Boston, New England, and elsewhere, roughly from the battle of Bunker Hill to the Abolitionist movement. What is amazing, however, is the constancy of certain themes or leitmotifs throughout our American history. Our forebears resisted, with all their being, tyranny and arbitrary abuse of power. So many of them struggled for inclusion and for racial justice – “All kindred, all colors…no nation or sect are rejected at all,” as the Shakers were singing, circa 1840. Americans were deeply allergic to the interference of foreign powers into our affairs, as Thomas Paine’s brilliant song text, “Liberty Tree,” underscores. And they constantly reaffirmed their birthright to freedom: “So guard your rights, Americans,” as the title song to the program exhorts us.

So deep feelings or slogans or dutiful historicity?

There are some solemn moments in the program, like William Billings’s “Absalom,” a profoundly moving lament for an American divided against itself: Tories versus Rebels, in his case, but you can feel the relevance to today’s schisms in every note of the 18th-century song.

But the overall tone of the program is anything but grim. We are an optimistic, forward-looking nation, with so much upbeat and celebratory music and words! And just plain fun… A review of the CD from a California paper has just crossed my desk; the reviewer dubbed the recording “a hoot and a holler.” We’ll maybe hoot, we’ll maybe holler, but we will also stay in time and in tune. Mind the music and the step…and with the patriotic sentiments be dandy.