MassOpera’s concert performance of  Dan Shore’s opera Freedom Ride, presented in collaboration with the Chicago Opera Theater (COT) this Sunday at 3:00 at the Strand Theater in Dorchester, sets the show in motion for its staged premiere production in February. Freedom Ride tells the story of one young black woman’s decision to join the civil rights movement as a freedom rider. COT Music Director Lidiya Yankovskaya will conduct an orchestra of 26, and NAACP Award-winner Tazewell Thompson will direct.

Lidiya Yankovskaya, conductor for both MassOpera’s New Opera Workshop performance and the premiere of Freedom Ride with Chicago Opera Theater, sat down to interview composer, Dan Shore about the creation of his opera.

LY: Dan—I’ve known about Freedom Ride for about 5 years, but the opera has been in development for a long time. Could you speak about how this project came to be?

DS: Early in 2011, Joe Baker, the executive director of the Longue Vue House and Gardens museum, asked me to create a piece that would feature my students at Xavier University of Louisiana and that would celebrate both New Orleans and the Civil Rights Movement. That ended up becoming the idea for a full-length opera, and even though it was a little beyond the scope of what either Longue Vue or I could really handle at the time, we brewed some coffee and started to work on putting everything together. 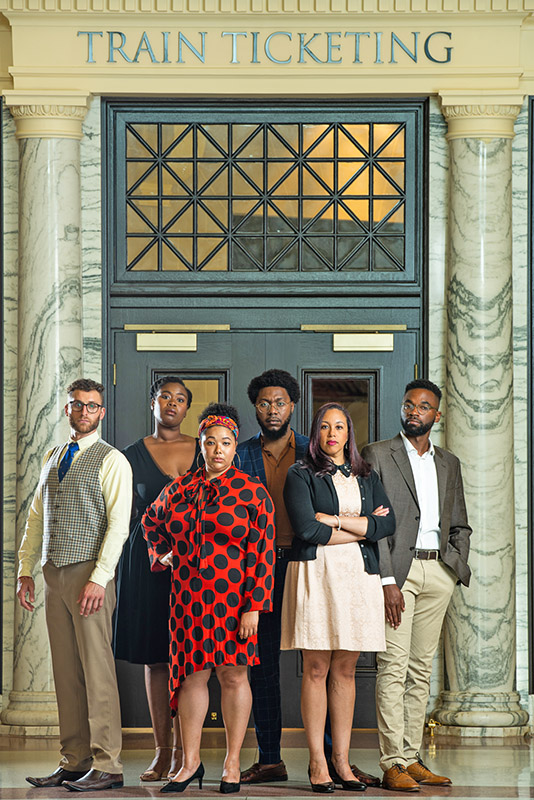 …So you worked on developing the work together with fellow faculty and students at Xavier. I love your stories about the way the chorus was involved–could you say more?

The chorus is everything. I loved my students at Xavier, and I felt so incredibly fortunate to be in a situation where I could put them on a stage and show them off to everyone. All of the music the chorus sings in Freedom Ride was specifically written to make those specific people sound good.  During the workshop in Chicago this past May you had recommended that I rewrite some of the bass parts because they were very low for a typical young artist at an opera company. But I didn’t originally write them for a “typical” singer; I wrote them for Micah, Adolph, and Isaiah, who had these beautiful lower registers.

And at one point, you said some Freedom Riders actually came to see a performance. What was that like?

It was terrifying. I have a pretty thick skin, and I can handle just about any kind of negative comments or criticism from just about anybody, but what do I do if Dodie Smith-Simmons says, look, I was there, and it was nothing at all like what you put on that stage. If they had hated it, I probably would have stopped right there and thrown out the whole project. But having them there was incredibly inspiring and a real turning point for me, because they showed me how much I had actually gotten right about the Freedom Riders, and how much more I needed to do to make the opera truly authentic and representative. I should also add that my students, knowing those real, live Freedom Riders were out there sitting on folding chairs in our auditorium, gave the performance of their lives.

The role of Sylvie was inspired by soprano Dara Rahming. The two of you are still very close friends. Could you talk more about what her role was in the process?

Honestly, I could go on for days about what an incredible artist and human being Dara is and how much this opera is hers as much as my own.  I just tried to write something that would showcase her goodness and her talents. And if a couple of times she felt a little stretched in the rehearsal process, it was just because there were some hidden strengths of her personality that I knew about, but she didn’t know about yet.

MassOpera is hosting an orchestral workshop of the piece. Can you speak about the workshopping process and what you hope to achieve over the course of our few days working through the opera?

I grew up in the theater, where workshops and readings and previews and out-of-town tryouts are understood to be part of the basic procedure of developing new work.  Because you never know what something looks like and sounds like until you actually see and hear it.  One of the most important components of this workshop with MassOpera will be hearing everything with the orchestra. I’ve heard a lot of this music with piano, and I’ve heard some of it with a large orchestra down in Mexico City.  But for Boston  and Chicago we’re using a medium-sized ensemble of about 25 players, and all of these orchestrations are completely new and untested.

I love your work because you write so well for the voice–where did you learn about vocal writing and who are your operatic inspirations?

I love singers, and I tend to hang out with them a lot.  And singers, as you know, like to complain…About many things, but particularly about  the music they’re working on.  And as they complain, they are dropping pearls of vocal wisdom that you can’t find in any textbook in the library. I think I’ve probably learned more from listening to my friends complain than I have from almost anywhere else.  And when there’s music that they absolutely love to sing, that tells me a lot, too.

You set text impeccably. I always feel that the words are clear and dramatically one with the music. Do you think this unity exists because you write your own words? What are the advantages and challenges of writing your own texts? Have you ever thought about working with another librettist?

I know I’m excited about the premiere at Chicago Opera Theater in February. What are you most looking forward to and what makes you anxious when it comes to finally seeing it all come together?

Comments Off on No Valkyries in this Opera Ride