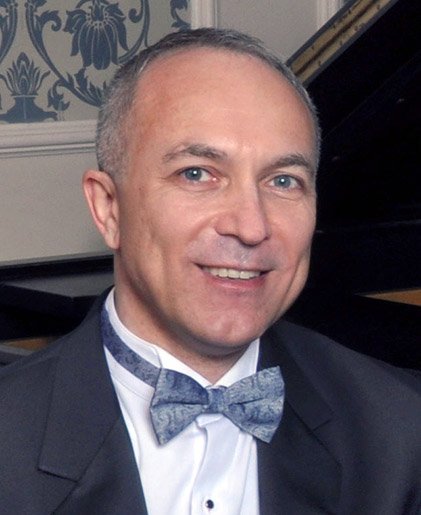 For the second concert of his “Glissando” series at Boston’s First Church, centering this year on Beethoven, pianist Sergey Schepkin chose four sonatas in the bright key of A major yesterday to demonstrate the vast scope of Beethoven’s works for the piano. He succeeded admirably, reveling in both the master’s emotional depth and structural design.

Opening with the early Op. 2 No. 2 (1795), Schepkin gave a boldly assertive reading of the first theme of the first movement, then skillfully turned the innovative modulations of the second theme into a sort of covert thunder rumbling with cross-currents and fitful threats. Implicitly, a dynamic storm now haunts the classical landscape and will come to a crisis, prompting massive chords and dramatic cesuras, evidence of death and rebirth. Schepkin imbued the second movement with a monumental grandeur lacerated by a heart-beat, the left hand steady and the right hand singing, creating an aching vehemence in search of appeasement, only to succumb to thrilling dark chords, tinged with regret. In the ensuing Scherzo, Schepkin used phrasing and silences to create a tense face-off between surface and depth, which resolved in the final Rondo as violence from the depth forced the surface into lyricism and grace from the high register took possession of depth and surface through an abundance of thrilling arpeggios.

With the “Funeral March,” Op. 26, in A-flat Major (1800-1801), Schepkin used phrasing and dynamics to create a Lebenswelt of conflicting emotions welling up at times into gorgeous tenderness, illuminated fitfully with shards of brightness (sharp phrasing in the right hand). He segued imperceptibly into the funeral march itself, giving it a wrenching and defiant power, as though reproaching the gods, atoms and void, for the mistake of making us mortal.

The late Op. 110, also in A-flat Major, begins with a molto espressivo first movement, in which Schepkin achieved great emotional intensity by juxtaposing a turbulent and troubled left hand with a prayerful right hand. He then produced a marvelously free, helter-skelter Scherzo, ending with a beautiful, enigmatic cadence tinged with a faint wisp of thunder. In the third movement Schepkin strikingly contrasted the immensely sad arioso with the luminous peace of a timeless and Bach-like fugue, delivered with clarity in each voice; Schepkin then both deepened the contrast and redeemed it with the second arioso and inverted fugue, ending with music so vast and thrilling as to defy description.

Beethoven wrote Op. 101 in A Major (1816) for the accomplished pianist Dorothea Ertmann, with whom he “communicated through sounds,” as Felix Mendelssohn reported. Schepkin gave a subtle and masterful interpretation: he showed us “beautiful and rare sounds arranged in such a way that we would hear them as never before” (to paraphrase a statement by Paul Valéry that my concert neighbor, Anne Kearney, told me, moved by Schepkin’s playing.) Schepkin’s traversal of Op. 101 started with the lighthearted, trustful, innermost sound of breathing, in, out, in, out – an expansive and mysterious communion with the universe, vulnerable to sudden breaks and silences (nicely emphasized). The second movement, in contrast, took us vivace alla Marcia through outermost sound, a raucous, bewildering, exciting and unpredictable daily bustle of activity at every scale, in streets and farms and forests and cities: we have no ear-lids. We cannot shut our ears as we can our eyes. We are immersed in sound. Even silence, to us, is sound. Indeed, on Schepkin’s reading, the Adagio made us hear the sound of silence, of our life silently racing away from us, of our daily dying, our daily outpouring of self into the universe, breath by breath. Then attacca to pure light (each note displaying its color) into the final movement, which opened to immensity, the whole universe turned into polyphony, into counterpoint, replete with sound possibilities in every direction and at every threshold, Alpha and Omega, sound without end.