The Gardner Museum Sunday afternoon series brought countertenor Iestyn Davies and viols of Fretwork in a chronicling of 16th– to 21st-century lexes. Intrigue encircled Calderwood Hall from the soundings of Byrd, Gibbons, Handel to those of Vaughn Williams, Tan Dun and Michael Nyman.

Small viols supported on the lap to larger sized ones held between the legs, five altogether, meshed magnificently, often truly refreshing the ear. The consort’s members are Asako Morikawa, Sam Stadlen, Emily Ashton, Jo Levine, and Richard Boothby. Alternating with instrumentals, Iestyn Davies invigorated the concert with a vocal pureness such that the noisiness of the world would be instantly forgotten.

Facts from the handout landed listeners with the times and places of the various early compositions. Facts also provided informational tidbit, further guiding ears to viol-countertenor tourists, such as myself. I did wonder, though, about Sunday’s repertoire, especially how it was chosen for this concert. In retrospect, could there have been insider “talk,” also in the handout, offering some of Fretwork’s insights from a long experience, 30 years in the making. It would be fair to say that at least a few of us who attended this Gardner presentation were, in part, looking to expand our knowledge and understanding of early music.

The choice to include J. C. Bach’s Lamento is an easy one to glean, its being one of the most deeply moving settings of biblical verses. Likewise, Vaughn-William’s The Sky Above the Roof and Silent Noon” given their immediacy in time and temperament, broke ears out of the Renaissance bands of imitative voices.

For contrast, at least some, Tan Dun’s 1995 A Sinking Love breathed wisps of silences and shadows of an ancient Chinese era, yet it did not steer away enough from the overall measured, often tearful feel of Fretwork’s outing. Known for his numerous film scores, English composer Michael Nyman’s two songs, while sticking with Fretwork’s English penchant, seemed more to pander. His melodic and harmonic childlikeness, despite being hewn with viols, mired itself in turtle crawl, particularly given the dry and wrap-around concert venue.

Melismatic drama finally erupted in the last of the program’s 16 entries, Handel’s Piangerò las sorte mia. Davies, one of the best countertenors in the world, spectacularly spun out the embellishment-lined Baroque style. Rapturous, too, his deeply moving tearful intonations to “I will cry for my fate.” 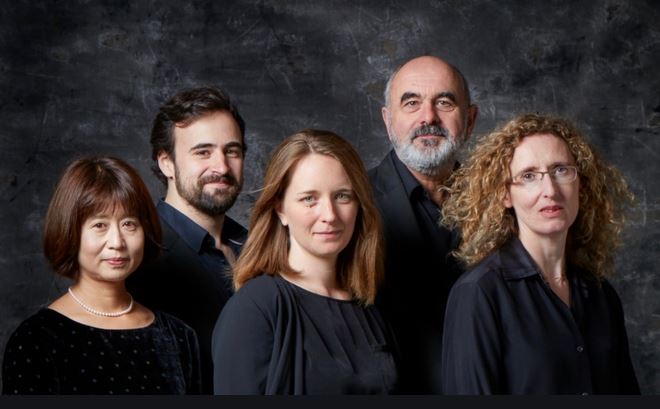 What happened over the course of nearly two hours in the Calderwood Hall might be described as a courtly trance. This coming about largely via viols in a tight framework of low decibels, points after points of imitative compositional structures. On the vocal side, Davies’ grow tones, those swells, at once knockout alluring and beautiful, would, over time, have my ears staring into space. Yet all the while, I listened. Afterwards, some commented on there being an overage of Fantasias and the like. I began to liken the William Byrd selections, Fantasia Two Parts in One and In Nomine in Five Parts No. 5, to crossword puzzles, or perhaps better, to “cross-note” puzzles due to streams of points of imitation and shifting dance rhythms. The same would be true of the Orlando Gibbons Fantasia in Four Parts No. 1.

“My mind to me a kingdom is” had opened this Sunday series special most emblematically with Fretwork and Iestyn Davies. Their delightful rendering, perhaps verging on tongue-in-cheek, of the multi-refrained William Byrd’s setting caught every bit of “My wealth is health and perfect ease;/And conscience clear my chief defense;…Thus do I live, thus do I die;/Would all did so as well as I.”

At the end, seriously satisfied applause showered the hall and encouraged an encore, Purcell’s insuperable “Music for a While.”