Attacca immediately displayed a sense of niche building. First violinist Amy Schroeder sported an artist’s type shirt and bright red heels, while second violinist Domenic Salerni dressed in concert-style black, and violist Nathan Schram in a more formal suit. Cellist Andrew Yee modeled capris and a rolled up short-sleeved oversized shirt as he snuggled up to his instrument, eschewing but only the very tip of the pin. Attacca opened with Haydn’s String Quartet No. 2 in D Major, Op. 71, posing an overcharge of youthfulness. Boldly fashioned, their Haydn made for more of a passive kind of listening. The quartet did most of the work carving out phrases in story-shaping ways. Dramatics appeared such as in the Adagio where a barely audible chord crescendoed to a booming roar. 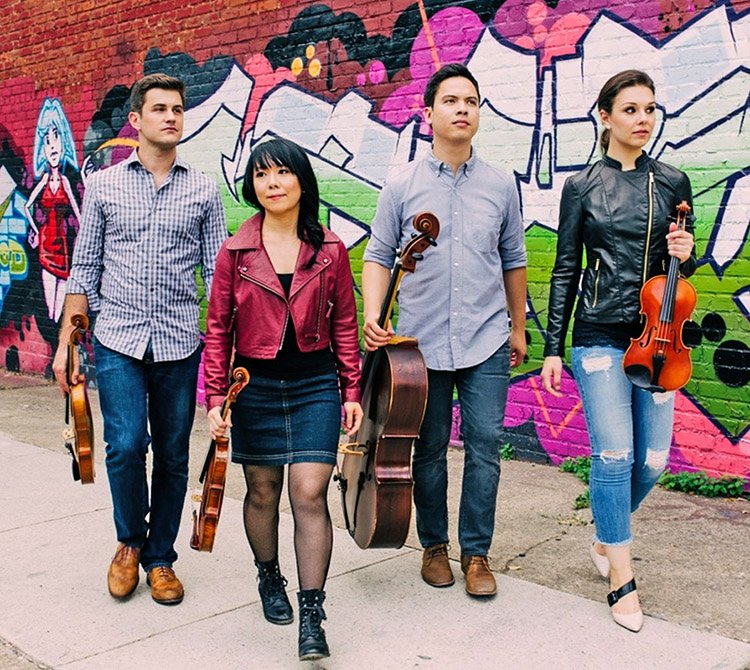 Jazz pianist Billy Childs composed his Quartet No. 3, Unrequited, in 2015. Attacca spoke about its harmonic language as more in the jazz vein than in what we are accustomed to hearing in classical idioms. That observation eluded me. Attacca informed us that Childs held in high regard Hitchcock film composer Bernard Herrmann (Obsession and Psycho). That connection to Childs’s work was real. Childs wrote: “it moves, like the five stages of grief, through a variety of emotions…” Surely this semi-cinematic oeuvre could take listeners into film noir imaginings by way of Attacca’s astute conjuring. Childs’s quartet’s non-stop emotive flow from romantic and pure love to neurotic possessiveness and despondent acceptance rather than mesmerizing, carried inquiries into musical symbolism. Attacca made of this music exactly what it is, a tip of the hat to Herrmann in perceptively wrought mood swings.

In contrast to Childs, Caroline Shaw mustered next to no musical momentum and comprehensibility. Also dating from 2015, her Plan and Elevation involved a good deal of brochure chatter about the five movements—all using the direction, attacca. For a reminder, that direction is for performer to begin the next movement or section of a composition immediately, without pause. The Ellipse, The Cutting Garden, The Herbaceous Border, The Orangery, The Beech Tree, titles were all carefully chosen and dutifully discussed by the composer, supplied little help to this listener. Attacca Quartet played out the colorless reed-organ effects and other such nowadays-go-to shavings from the likes of Ravel and Mozart.

Never before had Verdi’s String Quartet in E Minor felt so welcome. Recall that he composed it in 1873, as an exercise, while waiting out a delayed production of Aida in Naples. Attacca introduced the work as “really interesting.” With something more substantial than an exercise, it was back to melody, if not more. Attacca has strong facets to shout about especially if out-front playing is preferred. Its professionalism, one could say, remains a work-in-progress if one prefers an inviting polish. Mysteries did not unfold Sunday afternoon. At the close of the Prestissimo third movement, someone obviously thought the quartet had ended, given the panache the Attaca served up. Even the cellist thought it just fine, as he acknowledged the tiny burst of applause with a beaming smile. After that, though, the fourth movement had nowhere to go.

Comments Off on First Good Look at Attacca