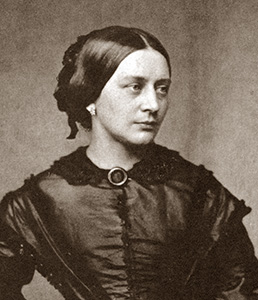 My tribute to the 200-year-old Clara Schumann comes to Jordan Hall next Sunday as the 29th Composer Celebration since I founded the series in 1990 with “A Salute to Prokofiev on his Centennial.” My collaborators and I then performed his music of all instrumentations with such success that my every subsequent year centered on the celebration of another composer.

Clara Schumann occupies a special part of my life. I am thrilled to present the music of this amazing woman who composed beautiful romantic music. A mother of eight with an incredibly successful career as a top pianist for 60 years, Clara had a tragic life, not only the decline and death of her beloved husband but also the deaths of four of her children.

Usually I go to the birth-countries of the composers in order to learn all about them and perhaps find new scores hidden in archives. I’ve been able to uncover music of Debussy, Massenet from the Paris Conservatory, Villa Lobos from his museum in Rio de Janeiro, some from Joaquín Rodrigo’s daughter in Madrid, (who later gave a lot of it to our NEC library), Puccini from Italy (his granddaughter Cimonetta even flew to our celebration at NEC), and Maxim Shostakovich came from St. Petersburg to celebrate his father’s 100 years, meeting with the NEC college orchestra and talking about Dmitri to the young musicians.

Every year, the large-scale gala concert plays in NEC’s Jordan Hall to a full house, and we have even repeated several shows owing to public demand, such as the Khachaturian and Gershwin extravaganzas. One of the unusual features of these concerts is how we present the genres in which the chosen composer created: orchestral, choral, solo, opera, chamber, even ballet. The Composer Celebration concerts are distinctive also because performers include NEC faculty and students, large and small ensembles, guest soloists from the likes of the Metropolitan Opera, La Scala, the Bolshoi Opera, Boston Ballet, and other collaborators.

Born in Leipzig in 1819, Clara Schumann saw her career as a musician start at the age of nine with her debut at the Gewandhaus. The career would continue six decades, cementing her place in the history of Romantic-era composers and performers. Taught by her father, she received daily lessons in piano, violin, and theory that would last for hours. Friedrich Wieck decided to do it in the manner of Leopold Mozart and his son. At 18 Clara earned the title “Royal and Imperial Chamber Virtuoso,” the highest award given a musician in Austria. This was an almost unbelievable accomplishment given her age and the fact that few women performed music publicly at that time.

Clara’s love affair with Robert Schumann, a student of her father, deserves its own novel. They would marry, finally, in 1840, then started a family and continued their musical journeys together for 16 years, until Robert died after years of suffering with mental illness. It is a wonder that it was possible to be pregnant numerous times and keep up an intensive performing career with multiple tours. She earned most of the money in the Schumann household, which was extremely unusual. She was practically the first one who popularized Robert’s music on her concerts, as well as, later, premiering music of Brahms. I am not sure the music of either composer would be as well known today without Clara’s advocacy.

It is painful to read Clara’s thoughts about composition in her diary: “I once believed that I possessed creative talent, but I have given up this idea; a woman must not desire to compose—there has never yet been one able to do it. Should I expect to be the one?”

Even Robert was not very happy about the huge success of his wife. He did not encourage her to publicize her compositions, and Clara stopped composing at the age of 36. What if she lived today, when we are so proud of women’s creations in all spheres?

Clara’s music touches me deeply and I am happy to share it with an audience who I am sure will discover something new. We will celebrate her bicentennial anniversary with the best of her compositions. Her Piano Concerto  Op. 7 with orchestra was written when she was 14, and it will be performed by the NEC Youth Philharmonic Orchestra under the direction of David Loebel. The soloist will be the winner of our student Clara Schumann Concerto competition, pianist Taylor Wang. We also highlight some of her vocal and chamber works.

Distinguished pianist and teacher Tatyana Dudochkin has served for 20 years as a Chair of the Piano Ensemble Department in the Preparatory and Continuing Education Division at the New England Conservatory and has been on the piano faculty for 30 years.

Comments Off on Dudochkin Pays Homage to Clara