The Piano Masters Series at Boston Conservatory at Berklee hosted the distinguished American pianist Phillip Bush Tuesday night at Seully Hall. Long known as a peripatetic chamber musician, he formerly directed the Bennington Chamber Music Conference, and now teaches at the University of South Carolina. His program wins high marks for imagination: American music from the years 1911-1922, which reveals a stylistic diversity comparable to that of the current day, while at the same time demonstrating a couple of unifying themes, one of which is the turning away from German influence toward the French, and the other being the emergence of liberated dissonance in the service of a still-Romantic vision of what theorists nowadays call musical “intention.”

The first half drew from that long-time staple of 19th-century piano repertoire, the short character piece, a genre that seems to have gone largely out of favor after the advent of high Modernism following World War I. Bush began with two entries from the Five Silhouettes, op. 73 (1916), by Arthur Foote, the earliest-born composer (1853-1937) represented during the evening. No. 2, “Dusk,” and 4, “Flying Cloud” revealed, somewhat contrary to the commentary of the soloist (there were no printed program notes), that you can indeed teach an old dog new tricks: while these pieces showed Foote’s customary melodiousness, delicacy and gentility, they also demonstrated that the composer had been listening to French music, if not Debussy then certainly Fauré (or maybe just his colleague Edward MacDowell). Foote notably avoided of clear Germanic cadences, channeling instead, loads of gentle major-seventh dissonances, and, especially in “Flying Cloud,” rapid-paced wispy runs. Bush’s read these with clarity and precision. Whether because of the very live room, the piano, or the executant, we found (in this and in much of what followed) less than optimal dynamic contrast, especially at the lower levels.

There followed perhaps the extreme example of Frenchiness in this grouping, Charles Tomlinson Griffes’s “The White Peacock” (1915) from his op. 7 Roman Sketches. Griffes (1884-1920, a victim of the influenza pandemic), ironically, had studied in Germany at Frankfurt’s Stern Conservatory and also with Humperdinck, but ditched Romanticism for an enthusiastic embrace of Impressionism. In “Peacock” (are there white peacocks in Rome?) the nominal E-major tonality is mostly submerged in chromaticism, whole-tone dissonances, with promiscuous meter changes. Two little motifs hold all this together: a dotted-rhythm item and a chromatic descent, which Bush presented with clear articulation that didn’t derogate from the colorful atmospherics.

Radicalism appeared in this grouping, too, beginning with one of the most (in)famous early works of Leo Ornstein (1893-2002, you read that right, still the title-holder for longest-lived composer), Suicide in an Airplane (1918, sometimes dated as early as 1913). Beginning with deep low snarly rumblings evoking the plane’s engines, it builds in noisy, hysterical intensity before tailing off again, as the plane presumably tumbles from the sky. One wonders, in fact, whether this “suicide” really adumbrates an individual’s self-destruction or a World War I dogfight, the theatrics being rather similar). Bush deserves kudos for iron fingers with his perfectly even yet persistently steely negotiation of its moto-perpetuo passages. Ornstein, the only immigrant composer on this program, should be more widely performed as a seminal figure in the development of American music. He ranked as one of the great pianists of his day, and, despite dropping out of the limelight in the 1920s, continued to produce some ruggedly well-made music, including nine piano sonatas, before he retired in 1990 at age 96.

While virtually none of the composers the first half represent concert-hall staples, probably the most obscure to modern audiences would be Marion Bauer (1882-1955). Highly regarded in her day by the likes of Copland, she also actively taught and wrote on music. Despite promoting the more advanced musical tendencies in her teaching and writing, and despite a flirtation with serialism in the 1940s, her own music, as Nicolas Slonimsky put it, “oscillates pleasurably between Germanic Romanticism and Gallic Impressionism.” It was the latter most on display in the Preludes Nos. 2 and 3, in A Minor and D Minor respectively, from her Six Preludes, op. 15 (1922). Despite the abstract naming, the preludes very much keept to the Gestalt of the rest of Bush’s selections. The former’s impetus was essentially lyric, with a charming melody occasionally enriched by “wrong-note” harmonizations, a kind of next-generation Amy Beach. The latter sounded more chromatic, with rapid passagework. Bauer’s oeuvre needs much more investigation, and Bush did right to feature it on this recital.

To close out the forepart of the evening, Bush turned to another of the notable radicals of his day, Henry Cowell (1897-1965), whose The Tides of Manaunaun (1911, some say, but first performed in 1917 as a kind of overture to  a chamber opera or theatricale, The Building of Banba), displays two tendencies in Cowell’s music: first, the use of tone clusters—Cowell has elaborate instructions in the score for how to create them with palms and forearms, both of which Bush employed—and second, the use of Irish or generically Celtic themes. The modal melody (notated in B-flat minor) for Tides is a simple tune, accompanied by the effective imagery of the left-hand clusters depicting the mythological tides that the eponymous Celtic god raised before Creation (don’t think too hard about that). As with several of the other works presented, the key element here, apart from the peculiarities of execution, is to manage the dynamic progress of the music while maintaining the character of the component elements. In this Bush achieved only partial success, controlling the clusters better than the melody line, which often lost its Celtic character in the, well, rising tide of sound.

Some maintain that Ornstein beat Cowell to the punch in the use of tone clusters (Suicide didn’t use them), and it’s an interesting coincidence that both Ornstein and Cowell went through radical changes of style, largely abandoning the noisy radicalism of their early works for a more direct, Romantic and emotional approach (George Antheil likewise). Cowell’s later music did continue frequently to resort to Irish inspirations, while Ornstein’s often evoked Jewishness. In a further irony, Cowell bitterly criticized Ornstein for apostasy when the latter produced his neo-Romantic Cello Sonata No. 1 in 1918 and Piano Quintet in 1926.

If the first provided the amuse-bouche, the second half definitely served the meat and potatoes. Bush is one of an increasing number of pianists (very few of whom are widely-known A-listers—what are they afraid of?) who have taken up the cudgels for the Ives Concord Sonata (full name: Piano Sonata No. 2, “Concord, Mass. 1840-1860”) (1911-15). It is, therefore, a work more heard-of than heard. But Bush put it quite accurately: it is a big, Romantic piano sonata, just one that employs typical late-Ivesian kaleidoscopic spikiness, idiosyncratic formal processes, and sometimes outright misdirection, to make its points. That it is one of the most-recorded 20th-century piano works may be partly due to the fact that its original edition is public domain in the US, but it remains stubbornly lodged in the realm of esoterica, notwithstanding that it is one of the greatest classical compositions ever. 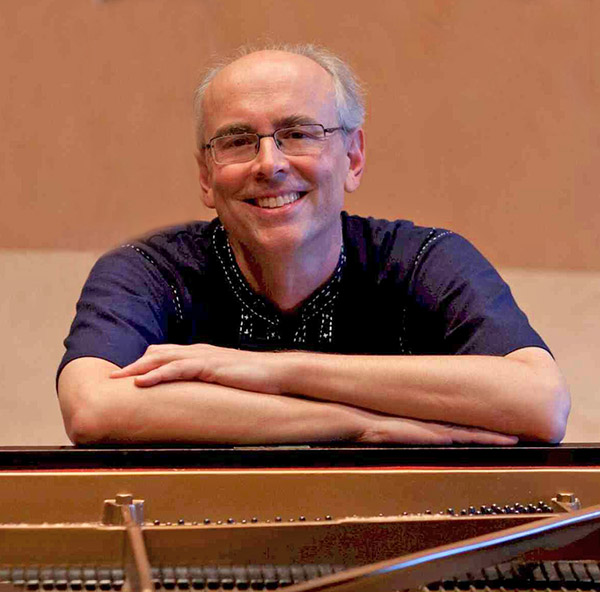 The sonata’s four movements (“Emerson,” “Hawthorne,” “The Alcotts,” and “Thoreau”) correspond in function to the usual movements of a sonata (“Hawthorne” is the scherzo, “Alcotts” the slow movement), except that “Thoreau” is slower than a usual finale, “at the pace of nature” as Ives put it, for obvious reasons relating to its subject. Instead of trying to provide a thimble-sized précis of what’s going on in the piece, we point you to composer Kyle Gann’s wonderful exegesis here. To that we add only the observation that the so-called “Beethoven” motif, here and in numerous other Ives works, is something of a pun. Those mighty four notes, harmonized in the major as Ives does in the sonata, are also the first notes of a classic hymn, whose tune is Charles Zeuner’s “Missionary Chant” (1832), most often set to Bourne Draper’s 1805 poem beginning “O Christian heralds, go proclaim/Salvation in Emmanuel’s name.” Ives did that sort of thing a lot, and sometimes his inspiration for using a particular hymn tune was the musical correspondence to something else transpiring in the piece, or for the image conjured by the words. The fact that people nowadays don’t remember these hymns, as Ives probably expected them to, adds both difficulty to catching Ives’s drift and poignancy to its impact once you have.

This being a report of a specific performance and not an essay in music history or analysis, it needs only our added commendation for Bush’s take on this mighty composition. While some of the pronouncements in Emerson were less orotund than its subject might have made them, Bush gave exemplary elucidation of the many strands of complex polyphony, and keept the listener’s attention focused on the connectedness of Ives’s references, especially when he “vernacularizes” the high-toned themes. His hushed ending was magical. Listeners familiar with Ives’s Fourth Symphony will recognize at once what is going on in Hawthorne, with its central satire contrasting easy worldliness with hard-won virtue; Bush flitted admirably through the fantastical passages, but could have maintained that almost Mendelssohnian feeling even through the ragtime and  easy-livin’ passages (and how often have you seen the names of Ives and Mendelssohn linked in one sentence?). The Alcotts was exquisite, building to its sublime climax (see Gann’s explanation of its significance) with assurance, passion and elegance. And Bush kept Thoreau gently flowing, making every chord count. BoCo master’s student Caroline Shaffer, supplied the flute obbligato, which floated smoky yet sylphic.