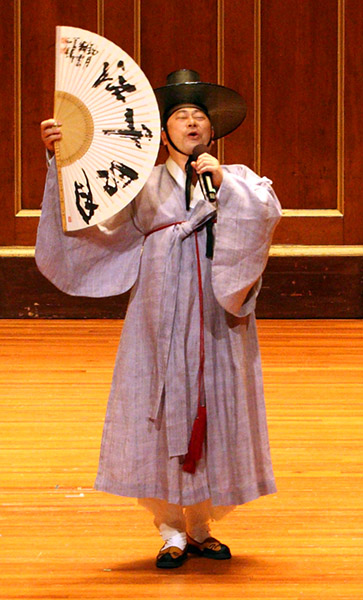 The Heart of the Heart of the Heart. Where is the heart of a nation, of a people, of a culture? Perhaps the ethnographically enthused might manage, on rare and cherished occasion, to access the center of a nation. Possibly, a seasoned explorer might have the fortuity of engaging in the throughs and tumult of a people. But is there a deeper essence yet? Might the foreigner access the central, iconic person at the core of this people: that person’s heart?

Certainly, many will never have such an opportunity. The deepest heart of cultural tradition is rarely accessed; even that of our own, native cultures. But sometimes, if we listen closely, an invitation cries out. September 29th, in New England Conservatory’s Jordan Hall, an invitation was given full voice. A mix of exhilaration, awe, and ferociousness commanded the space as the Korean Cultural Society of Boston presented the voices, drumbeats of their nation, their people, their cultural soul. Those of us lucky enough to have been there enjoyed unique access to an intimate and raw show, featuring dance, music, and drama from the Gugak tradition: an ancient form of Korean expression with links to that country’s earliest historical accounts and evidence of cultural self-awareness.

Some define Gugak Korea’s Classical music. This can be a helpful introduction for foreign audiences insofar as they will understand the term works to indicate a variety of musical genres and styles. This program incorporated music from the pansori (operatic) repertoire, shamanistic rites, for dance purposes, fanfares, and several improvisatory modalities. However, concerning the vocabulary used to define the term for non-Korean audiences, it seems inappropriate to accept so much dependence on western analogues. Certainly, Gugak is every bit as sophisticated as the Western Classical tradition, but it does not necessarily benefit from comparison. It speaks for itself and deserves to be listened to on its own terms. One should not be led to believe that Gugak can be understood through description. You need to hear this.

Throughout, the distinct voice of Korea spoke in a wide spectrum of timbres, both alone and in collaboration. From the vicious wail of Wan-chul Won’s taepyungso (a shawm-like reed instrument), to the absolute commitment of Hyeun-bin Lim’s pansori singing, the rustic veneer of Tae-baek Lee’s bowed ajaeng (which can only, inadequately, be compared to a dulcimer or zither), to Wan-chul Won’s daugum (flute) in capturing a sound so ancient and sophisticated that it may be that of the Korean wind itself, and finally from Ji-young Yi’s capabilities of utmost grace while plucking her gayageum (again, something like a zither) — embodying pure sonic and visual poise – the show never lacked variety. All the while, an impressive collection of traditional percussion instruments supported this voice. Occasionally, the percussionists took center stage (in isolated improvisatory solos incorporated into certain pieces and fully fledged in the Three-drum Dance that closed the  first half) in order to more clearly example their own contribution to the sonic world at hand: the pulse, the voice’s native source of perpetuation — a vital energy, never less than mighty. One cannot possibly listen to this music passively: it is a ferocious, wild, impassioned, full bodied wail delivered with brutal precision and undeniable sincerity. This music is rent from the heart: one cannot only listen — engagement is demanded.

Two distinct efforts emphasized the Korean Cultural Society of Boston’s priority of international influence and collaboration. First they invited a cellist to improvise alongside the pansori singer in the excerpt of the dramatic work, “Shimchungga.” Then, in the second half of the program, Seo Hye Han and John Lam from the Boston Ballet joined Ji-young Yi (gayageum), arresting the audience in a supremely tasteful interdisciplinary experience. Such efforts are always admirable, and the Society should also be applauded for such efforts to include a diversity of these artists; particularly in this second contribution they achieved a true fusion and evidenced a concordance among the disparate constituents. Not only did immaculately precise synchrony obtain between the music and dance, but also, the resulting summation yielded a gripping display of emotional sincerity well beyond the expectations for most combinatory experiments. We felt fortunate to have been granted access to its artistic realization of some deeper, human nativity.

How can we show our thanks? How can we reciprocate the generous and most intimate utterance from the Korean soul? Should one feel an intruder when faced with something so frequently buried in folds of privacy? Maybe so, but only if an unfortunately conservative — though common — definition of the private realm is accepted and perpetuated. What if we allow ourselves to accept this invitation, choosing to observe and participate? Let us not simply gawk at the scene as if through a peep-hole, but instead open our own doors in return, thus expanding the borders of the private realm. 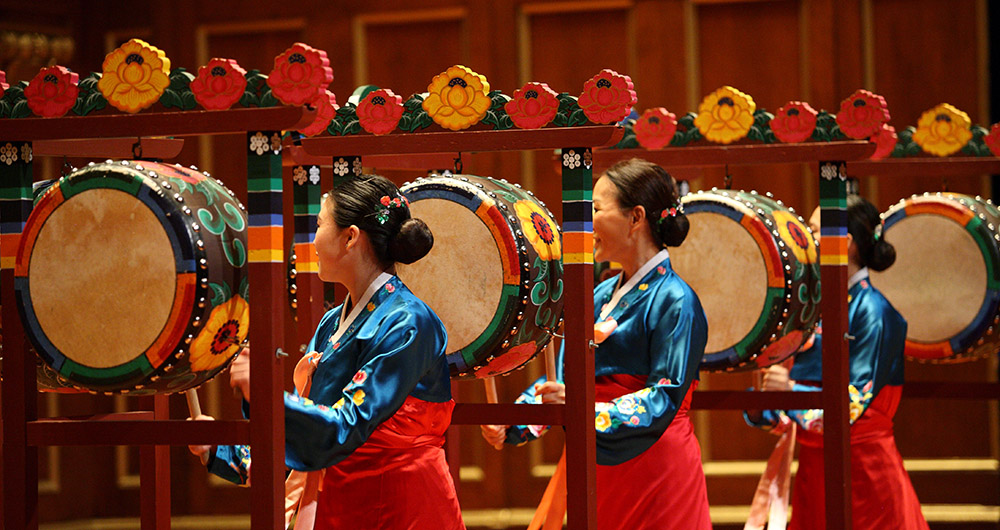 Our world is always filled with international conflict, the blindness engendered by blithe intellectual isolation, and unnecessary discord between the various groups of a common species. The prescience of these issues is in no way diminished in our current age. It is not more practical communication that is needed for the resolution of these tensions; what is now and always more critical is authentic communication. This weekend, we were faced with an authentic voice. It is not just a pleasure to listen, it is a responsibility. Further, this voice must be answered, must be supplied with an authentic response. The Korean Cultural Society of Boston has generously put forth the voice of Korea’s heart: fully exposed. We need to be there. Let us share a private realm and perhaps, in our small ways, we can work towards a more universal sympathy through the congregation of our arts.

Eric Hollander is a PhD candidate in Musicology at Brandeis University. His research is focused on musical realizations of poetic texts and oral traditions.