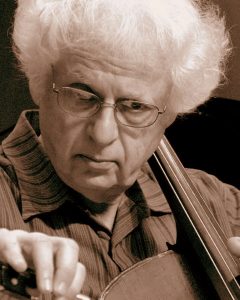 The 35th season of Laurence Lesser’s First Mondays at Jordan Hall takes as its thematic glue the connections of composers with each other and their friends and inspirers. Every concert includes voice; every concert includes NEC faculty and alums. Each program connects one “standard” piece with others to make some historical or musical point. The three fall concerts are all interrelated. Clara (b. 1819) and Robert Schumann, Felix Mendelssohn, Joseph Joachim and Johannes Brahms, hence “Friendship.”

Works of Robert and Clara Schumann open the series on October 7th. Bach and his crucial admirer Felix Mendelssohn supply the vital stuff of the November 4th show. For the December 2nd, Lesser will bring out examples of Brahms’s connections with Johann Strauss II, Schumann, Schoenberg and Joachim. Skipping January, and February, the series continues in March, April, and May with “American Sonorities” and more “Friendship.” The complete program is HERE. Lesser talks to BMInt below:

FLE: Do programmatic concerts really work or is it a marketing gimmick?

LL: After 34 years, I have developed a philosophy that says that there are a lot of very faithful listeners at First Monday concerts who trust me to stretch their listening ears. I imagine I have earned their loyalty by giving them something that they know already or that they feel comfortable with and then building into that things that they never have thought about or that would be interesting to them in terms of the background of what we’re presenting. I have the audience very much in mind, but I also have my vision in mind and to find the right balance between those two things has always been my motivation.

Does it make the compositions that appear on a particular program more satisfying to this audience after they’ve heard your talk about how the pieces are connected?

At the First Monday concerts I always talk a little bit as an introduction, trying to give them a few clues. Many people are very grateful for that, especially if there is something that they won’t understand if the program is just played straight. I’m happy to say something that then invests them in the program.

Sometimes you talk about musical analysis and what makes the pieces work, whereas in this season you seem to be more interested in the social aspects. The first two of this season’s concerts could have been performed in Schumann’s house or Mendelssohn’s house and it’s not inconceivable that some of these pieces would have been actually played together. Does that seem make them more satisfying?

Look at the Mendelssohn concert in which a young French cellist of an Italian background, Lisa Cristiani, suddenly becoming famous at the age of 16 or 17, is going to play her whole evening at the Gewandhaus, under Felix Mendelssohn’s charge. It’s a strange program. But she must have been quite wonderful. And, apparently, Schumann was there also. He was still living in Leipzig. Mendelssohn wanted to write something for her which is in the format of what he called “songs without words.” His famous 1842 letter to Marc-André Souchay, who had asked Mendelssohn the meanings of some of his Songs without Words, explains it:

There is so much talk about music, and yet so little is said. For my part, I believe that words do not suffice for such a purpose, and if I found they did suffice I would finally have nothing more to do with music. People often complain that music is too ambiguous, that what they should be thinking as they hear it is unclear, whereas everyone understands words. With me it is exactly the reverse, and not only with regard to an entire speech but also with individual words. These, too, seem to me so ambiguous, so vague, so easily misunderstood in comparison to genuine music, which fills the soul with a thousand things better than words. The thoughts that are expressed to me by music that I love are not too indefinite to be put into words, but on the contrary, too definite. And therefore I find in every effort to express such thoughts in words that something is right but, at the same time, that something is lacking in all of them . . . . If you ask me what I was thinking of when I wrote it, I would say: just the song as it stands. And if I happen to have had certain words in mind for one or another of these songs, I would never want to tell them to anyone, because the same words never mean the same things to different people. Only the song can say the same thing, can arouse the same feelings in one person as in another, a feeling that is not expressed, however, by the same words.

It’s a very, very strong thing to say, “if I could say with words what I feel I would have nothing more to do with music.” Then if he’s writing a song without words for this lovely young woman, what is he thinking about? I don’t know what he’s thinking about in detail, but he must have liked her.

Absolutely. And I think that the whole point of it is that he can explain his feelings and emotions better in music than he could tell it to you. So, I’m not going to tell the audience what the story is except that here’s the situation where this lovely young woman comes and plays and he’s moved to do something. It’s the only song without words that he wrote not for just piano. Of course, you know, a great many of them are transcribed, but this was an original cello piece! And then what happened to her is very sad as she died at the age of 26 of cholera in Russia. And he was gone by then anyway, but I think it’s very interesting.

When I introduce this concert, I will also talk about Mendelssohn’s great gift as a prime mover of the Bach revival. Christoph Wolff and I discussed finding a Bach cantata Mendelssohn might have performed, but we couldn’t find a good one. Then Christoph pointed out that the Bach triple keyboard concerto was played with three pianos including Clara Schumann and Mendelssohn on more than one occasion with the Gewandhaus Orchestra and one time also with Franz Liszt. And I think that’s very interesting but what I will also talk about is the fact that the single most important thing that Mendelssohn did for Bach was to revive the Matthew Passion.

In your concert order, the concerto for three harpsichords ends right before intermission, then comes “Erbarme dich” immediately after intermission. Are you going to set it up somehow? It’s just hard to imagine intermission and then, plunk, right into it. Programmatically, it needs something to be prepared.

The space of an intermission will do that I am sure.

And you could also argue that you should perform the entire “Erbarme dich,” not just the violin obbligato, without words; it’s so intense and powerful that it would also be an effective song without words and tell its own story.

Bach used religious words all his life. Mendelssohn is the one who is suspicious of words. But anyway, every time I hear “Erbarme dich” it’s so beautiful I just want to cry.

And you know what he famously said to his former classmate and collaborator Eduard Devient, “How ironic that and actor and a Jewish boy (Juden Junge) have brought the Matthew Passion back to the Christian people.” That’s quite a comment!

But as you can imagine, Felix was very conflicted about his beliefs. He was converted to Christianity when he was 7, along with his siblings. He believed in Christianity but was also the proud grandson of Moses Mendelssohn, the leading voice of the Jewish community in Germany. If you want a perfect example of the conflict, listen to the slow movement of the Mendelssohn D Major Sonata for cello and piano which starts with a chorale and then has the cello singing this thing that sounds like the Jew has wandered into a church and he doesn’t know what he’s doing there.

And Elijah, based on the Hebrew Scriptures, one could argue, is some of the deepest music he wrote. That resonated with his eternal Jewishness roots.

Listen, my late wife was Japanese and we called our two children Jewpanese [LAUGHTER] and they are both. He was Christian and Jewish both.

He would say so. He never denied Jewishness at all.

Turning now to December, it’s as if you were saying, we’re going to have Brahms’s F-A-F (frei aber froh or free but happy) instead of Joachim’s F-A-E (frei aber einsam or free but lonely).

What I’m trying to do in the fall series is to show that these are five great people who fed off one another and enjoyed mutual friendship. So, I mean, the F-A-E Sonata [one movement each from Albert Dietrich, Robert Schumann, Johannes Brahms, and dedicated to Joseph Joachim] was written as a surprise because Schumann, his gifted student Dietrich and the young Brahms knew that in a few months Joachim was coming to visit, so they decided to write a special violin sonata for him.

They were doing it for him and it was an act of friendship; if he had been lonely, maybe with them he felt less lonely. . .

It’s another example of the tight circle that they were in and how they influenced one another. And just to dwell on friendship and the ability of people to learn from one another and to be grateful what one another gives is a very telling thing to do at this particular moment in our country.

Now going musical back to musical friendships, Johann Strauss II had a fan in Schoenberg the way Bach did in Mendelssohn.

Yes, Schoenberg made a transcription of the Emperor’s Waltz for string quartet, piano, and two winds, flute and clarinet. His students Webern and Berg also made transcriptions of popular pieces so they could raise money to pay the expenses of a concert of their own more “difficult” music.

The funny story goes like this: Johann Strauss II was the John Williams of Vienna at that time. Nobody had made as much money in classical music as he and everybody knew his pieces. And along comes Johann Strauss’s wife and says, Mr. Johannes Brahms, you know, would you give me your autograph, here is my fan (that was the fashionable thing to do). And he writes the theme of “Beautiful Blue Danube” on it and underneath, “unfortunately NOT by Johannes Brahms.”  We’re doing the “Emperor Waltz” because that’s the one that Schoenberg transcribed, and it’s a nice link among Viennese composers of that time.

We’ll also have Brahms’s beautiful op. 42 Drei Gesänge on the December program. They’re going to be done by six voices which is the way he wrote them. The first one is particularly beautiful.

Let’s defer our discussion for the events after January other than to mention how you will have a rich list of personnel. Verona and the Parker appear your last program without collaborating on an octet. Is that luxury programming?

I’m not just producing good concerts, but I’m also showing our pride in who we are at NEC. Make sure you look at the names on all the players HERE.

Comments Off on Who’s on First?