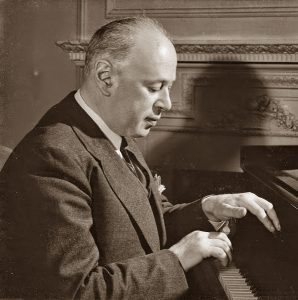 The sometime-Bostonian piano great Alexander Borovsky appeals to me. As one of his “grand-pupils,” I have always taken note of any references to him. My piano teacher JoAnn La Torra had studied with Borovsky and frequently mentioned him and his approaches in our lessons. Borovsky was born in Latvia in 1889 and died in Waban MA in 1968. His generally successful career in the U.S., included the distinction of having made the most appearances with the Boston Symphony Orchestra of any pianist. One was of the Roussel Piano Concerto, which he had premiered in Paris in 1927. It can now be heard on a CD from Yves St.-Laurent HERE.

Borovsky made some 78s, and a number of LPs for Vox in the early 1950s, all Bach and Liszt. The Bach included the 2 and 3 Part Inventions and all the French and English Suites. His Liszt sets were all the Transcendental Etudes and all 19 Hungarian Rhapsodies (the present program notes get that wrong, stating he did only the first 13) coupled with the Rhapsodie Espagnole. None of these has been reissued on CD except for one Hungarian Rhapsody in a VAI Audio anthology, although some excerpts may be heard on YouTube. An obscure label called Melo Classics issued a CD of a 1953 Paris recital including Bach, Beethoven, Brahms, Chopin and Liszt. Amazon says it’s out of print but it can be bought through the Melo Classics website. It’s in quite respectable sound and the playing is very attractive.

Now we can hear Borovsky playing the complete Bach Well-Tempered Clavier. He taped the recording in 1958, for some unknown purpose, and it has survived quite well, the mono sound being quite respectable for its vintage. I presume these were studio sessions with the tapes edited at least somewhat, since there are no detectable errors in the playing.

The first WTC ever recorded was done on 78s by Edwin Fischer. It has frequently been reissued. Fischer was a major pianist, but his Bach playing is definitely of his era and holds little fascination today for at least this listener. Borovsky, although a contemporary of Fischer, is more modern in his outlook. He will bend a tempo or emphasize a part when he feels the need strongly enough. But mostly this is more straightforward playing. Since it is so well executed, listeners today will be able to enjoy these performances.

Are they compelling enough to be worth acquiring? Maybe, but only for listeners who have some special interest in the pianist or the era. Vladimir Feltsman plays the WTC on the piano with greater stylistic awareness and greater clarity, but without any of the annoying eccentricities which intrude too frequently on Glenn Gould’s playing. Although pianists can do justice to this great music, it still sounds better on the harpsichord, at least for those of us who love the sound of the harpsichord. Bob van Asperen has recorded a notable WTC, which is currently available with other Bach keyboard works in a super-bargain Warner set.

So we don’t have a desperate need for Borovsky’s WTC. Still, when listening to items like the great eloquence of Book 2, No. 2, just as one example, it’s gratifying to hear.

The four-disc set comes with extensive program notes by the pianist which are frequently interesting and often illuminating. This is a private edition, and can be obtained only by direct order from its publisher, William J. Jones. The price is $40 including domestic shipping; buyers from other countries will have to ask Jones for the price including shipping to them. Borovsky website is HERE.

Comments Off on Alexander Borovsky Did WTC on Piano in 1958