Though movements from Salvatore Sciarrino’s unusual Pagine arrangements came up throughout the night, it is better to talk about the suite as a single entity. JPSQ opened with Sciarrino’s setting of Cole Porter’s “I’ve Got You Under My Skin,” a Great American Songbook standard. Interestingly, Sciarrino set the tune as a slower chorale, akin to a jazz choir, rather than traditional medium swing. This opener let JPSQ show how well they blended. Mix lead lyrically as Wilds harmonized. Domenico Scarlatti’s Sonata in Re minore, L. 215 came across as the only weak setting, as Sciarrino sacrificed the articulation and bite that defines Scarlatti’s harpsichord music. Sciarrino corrected course in arranging Gesualdo’s “Itene, o miei sospiri,” which sounded as though it was originally for sax quartet. Out of all of the Pagine movements, this one best allowed JPSQ to show its power in blending; slight changes to the texture acted as earthquakes. The last selection, J.S. Bach’s Kyrie, “Gott Vater in Ewigkeit,” BWV 669 from the Clavier-Übung III, evoked Bach sounding through mist—hazy around the edges but through the mist, the voice of the master. Without being amorphous, and in contrast to the Scarlatti setting, Sciarrino took the edge off Bach’s keyboard music just enough to convincingly make the arrangement satisfying.

Composed by Wilds’s brother Jack, The Red Cape featured two Spanish-inspired movements transcribed from his earlier string quartet. The second movement, driven and passionate, made peculiar use of slap tongue to mimic pizzicato. Wilds, Chamberlin, and Stevens have to be commended for how they approached the extended slap tonguing sections; performing those can be hard, and not every performer can do them, so to find three guys who not only can but can execute them for long periods of time is very rare. The second movement also ended with a daring passage, placing the melody in minor seconds between the SA or AT voices, creating a biting finale.

John Harbison indicated all four movements of his Trio Sonata (three independent voices) as Fast; Chamberlin sat this one out. This is classic Harbison: confident and Neo-Classical. The first movement set melody against major second harmonization. The second became a lilting melody emanating from Mix harmonized elegantly by Wilds and Stevens. The third movement might be the most harmonically daring, where Stevens acted as a disfiguring voice to an otherwise consonant melody. The fourth movement pitted Mix and Wilds blending together in a sweet melody against Stevens in the lower register. Overall, this sonata showed Wilds as a chameleon; on melody, harmony, or something else he always seemed natural.

Stratis Minakakis wrote Alismono ke Cherome on a famous heterophonic folk tune from Northern Greece, imitating the styles’ necessary vocalists of partis (melody), klostis (pedal tone bass), and two isocrates (short improvisatory singers on the pedal tone). Minakakis fused the traditional Greek tune with his own harmonic language, laced with microtones and a sense of floating in and out of time. From the audience, we could all see how hard JPSQ as a unit had to work to perform this piece; that’s why this reviewer believes it to be the highlight of the evening and a composition for saxophone quartet that should last for a long time, though one that needs lots of focus and serious effort.

In its second performance ever, Marti Epstein’s Bluff in three movements tried many different techniques for the this ensemlbe. The first movement hid what might be a melody in square dissonant chords, all members of JPSQ matching each other brilliantly. The second movement provided the most interest. Epstein created a klangfarbenmelodie that cast around to different members of the quartet in a hard to distinguish pattern. The slight timbral changes made it clear it wasn’t one voice through the ensemble, but everything worked fantastically. The last movement loosely resembled the first, albeit with the melody detached and floating in the soprano sax, realized hauntingly by Mix, above chords. 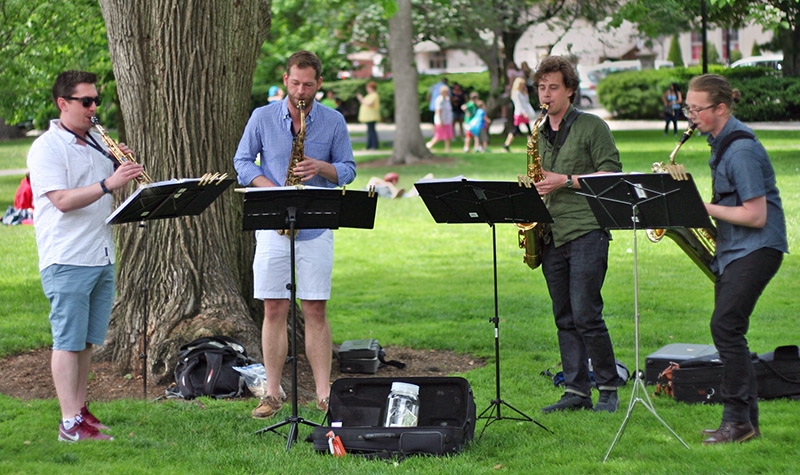 Kate Salfelder’s Stolen from Above might be the most complex undertaking of the evening. The composer used a Salve Regina chant as basis and smashed against highly dissonant and fast-moving passages. Sectional in nature with wide ranging characters from aggressive to mysterious/austere, Salfelder managed to easily exploit the inherent duos and trios of the sax quartet, aided further by all four members being so attuned to each other’s playing.

JPSQ ended the evening with the tuba-euphonium ensemble transcription, Take This Hammer from Steve Snowden. Immediately, as a tuba player, this reviewer could sense its tuba-euphonium origins without needing to see that Mix and Wilds changed to another tenor and baritone sax respectively. Rock and Motown inspired, it could fit on a road trip down Route 66 with ease. Before the performance Wild commented about his favorite section being his “Power Rangers Moment” which any child of the 90s would be able to hear a reminiscent “Go! Go! Power Rangers!”-esque text setting to his part.

Young and vibrant, versatile, and engaging, the Jamaica Plain Saxophone Quartet also has unrivaled breadth of programming; aside from the classical pieces, they also frequently perform Backstreet Boys and other pop tunes. It would be lovely to hear them in any capacity at any time.

Ian Wiese is a graduate student in composition at NEC, where he studies with Kati Agocs.

Comments Off on No Bad Luck for Local Saxophone Quartet