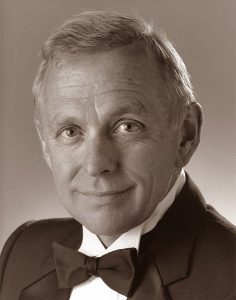 Singer, voice teacher, and impresario Richard Conrad died peacefully at home in Eliot, Maine on August 26th after a long illness. His brother Howard, sister-in-law Susan, and longtime friend and colleague Ellen Chickering were at his side. The dynamic performer, insightful voice teacher, and brilliant operatic interpreter ranged from Monteverdi to Brel, touching countless lives with his singing gifts and distinctive ability to teach his craft to others.

Eldest son of Lester and Mildred, Conrad grew up in Larchmont, NY. He graduated from New York State University and Boston University where he studied commercial and fine arts. Conrad began his vocal studies in Boston as a baritone under Harry Euler Treiber. Here he studied Lieder and German operatic repertoire with famed conductor and composer, Felix Wolfes, who is noted for his piano-vocal scores of operas by Strauss and Pfitzner, as well as his achievements at the Metropolitan Opera and teaching at New England Conservatory. Conrad pursued additional repertoire studies with art song champions, Aksel Schiøtz and Pierre Bernac.

During these early studies, Conrad developed exceptional skill in managing the “head” register, and was encouraged to emulate baritones of the 18th and the early 19th centuries, many of whom sang as tenors. As a result, in 1961 he debuted as a tenor in Boston in the American premiere of Mozart’s La finta semplice, following which came his recital debut in Washington, DC.

Conrad astonishingly caught the attention of the acclaimed Joan Sutherland and her husband conductor Richard Bonynge during their 1963 Boston tour. Persuasive fans of a local singer named Richard Conrad informed the superstar couple that they had heard a young tenor who could sing florid bel canto music “just like Miss Sutherland.” Almost overnight, a successful audition in New York led to his joining forces in London with Sutherland, Bonynge, and Marilyn Horne for a series of groundbreaking recordings of this repertoire, including Decca’s The Age of Bel Canto.

[Conrad] has runs with a flexibility unheard on records since [Fernando] de Lucia . . . the runs and decorations are astounding in Conrad’s performance as in de Lucia’s; in some ways, rather more so, for one of his runs carries him up to high C and down with perfect evenness to comfortable bass G, while the trills are a delightful embellishment that de Lucia did not offer, and the triplets of the often abbreviated final passage are all scrupulously in place . . . moving on to one of Handel’s florid arias, Sesto’s ‘Sperai ne m’ingannai’ from Giulio Cesare, we have to again marvel at the virtuosity of scale-work in the da capo section, and to ask whether any tenor has recorded Handel with this kind of skill before him.

After abundant early triumphs, Rome became Conrad’s base. He performed tenor repertoire in recital, with orchestras, in opera, and on radio and television throughout the United Kingdom, Italy, various European music centers, North America, and Africa. Of particular note were his exceptional programs on florid singing for RAI, Italy’s national public broadcasting company.

Return to the States—You Can Go Home

In the early 1970s, Conrad’s appearances in numerous productions, including Così fan tutte,

La rondine, and Help, Help, the Globolinks in Detroit led to a seat on the voice faculty of Oakland University in Rochester, MI, where he began an intercontinental commute, splitting his time and talent between Rome and Detroit. In addition to his Oakland University students, Conrad assembled a studio of private students, many of whom went on to regional and international professional singing careers. Conrad’s gifts as an impresario shined brightly in this period of his life as a distinguished champion producing operatic concerts with several orchestras in the Detroit area.

Richard Conrad’s buoyant spirit and discerning artistic leadership brought Boston Academy and its successor company “The Bostonians” to the vanguard of the Boston musical scene.

In 1983 Conrad was the victim of a mugging in which his voice was severely injured with little hope of continuing his beloved profession. After exhaustive rehabilitation and retraining under Gisela Rohmert at the Lichtenberger Institut in Germany, Richard reemerged as a baritone specializing in Italian bel canto buffo roles and taking many star turns throughout the United States in choice comic Gilbert and Sullivan roles including KoKo in The Mikado and The Major General in The Pirates of Penzance.

In 1985 he began touring in revues of music by Cole Porter, Jacques Brel, Jerome Kern, Kurt Weill and Noël Coward. In 1990 he made his New York theater debut in the premiere of Janet Hood and Bill Russell’s Elegies for Angels, Punks and Raging Queens, and, in 1991, he sang in the premiere of Move! at the Royal Theater Carré in Amsterdam. He has also delighted audiences and enjoyed standing ovations as Albin in La Cage aux Folles and as Cervantes/Don Quixote in Man of La Mancha.

While leading Boston Academy, Conrad found himself in great demand as a singing teacher in both Boston, where he maintained a private studio and taught for a short time at the New England Conservatory, and in New York, where he taughtin the living room of his dear friend and colleague, legendary American soprano, Eleanor Steber. His celebrated vocal instruction was primed by the post-mugging rehabilitative work with Rohmert, and his association with Steber. Many of his students have appeared as soloists with the Boston Symphony and Pops, Boston Lyric Opera, other major New England-based ensembles, and dozens of leading orchestras and opera companies across North America, Asia, and Europe.

In addition to the influential The Age of Bel Canto, Conrad’s commercial recordings include: Handel operas with Joan Sutherland (Atalanta and Giulio Cesare); Barber’s Vanessa; disks of songs of Noel Coward, Stephen Foster, and Arthur Sullivan; and, as yet unreleased collections of songs of Richard Strauss, and his friend and colleague, Daniel Pinkham. Videos of staged bel canto opera excerpts with Joan Sutherland from CBC-The Canadian Broadcasting Corporation regularly appear on internet social media.

Conrad was known not only for his quick wit (and even quicker tongue) but also for his “family” of beloved beagles, owning and simultaneously walking four of the hounds near his home in Boston’s Charlestown neighborhood. He leaves behind thousands of students, collaborators, and fans who will be forever grateful for the expertise, opportunities, and love he shared with them. Plans for a memorial gathering (and concert) are in the works.