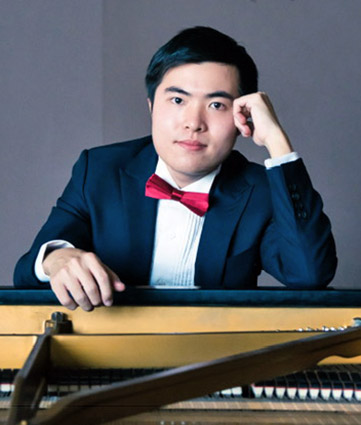 For the Mercury Orchestra’s final engagement of its summer season on Saturday, this time under the aegis of the Foundation for Chinese Performing Arts, it indulged in a Brahmsfest at Jordan Hall. The event served as the occasion for the winner of Mercury’s concerto competition, Zhiye Lin, to show off his chops in the Concerto in D Minor, which, together with the ever-popular Symphony No. 2, was led by Music Director Channing Yu.

That pair of works hardly need extensive commentary (see Roger Hecht’s concise notes—and footnotes!—here). What is interesting about their juxtaposition is that they represent the polar opposites of Brahms’s productivity as a composer: the concerto, like the piano quintet, the third piano quartet, and the first symphony, had slow and arduous births, while the symphony was a comparative breeze. The concerto, which Brahms began at 21 in 1854 and published as his op. 15, at least in part reflects his relationship with Robert and Clara Schumann, and the former’s suicide attempt and institutionalization. When he finished it, in 1859, it was only his second orchestral piece (and, unlike the other one, the Serenade No. 1, it had a difficult public reception). It can thus be thought of as a young person’s work and among the most extravagantly Romantic of utterances, without breaking the firm bounds of Classical form. Performances can be tricky operations, with probably most interpreters stressing the Romantic.

The soloist, a twenty-something native of Shantou, Guangdong (Canton) Province, is a Cleveland Institute graduate and MM student at Juilliard with an extensive concert career going back eight years. His take partially defied expectations of how a young person would embrace this youthful music. While he breezed through the most technically difficult bits with impressive panache, his overall approach seemed rather cautious (granted, Brahms eschewed flashiness, even in the third-movement cadenza). Moreover, except in the slow movement, which was quite lovely, with a generous swelling of passion for its coda, he seemed to lack the singing lines, especially in the lyrical themes of the outer movements, that would have thrown the fearsome thunderbolts and demonic trills of the first movement and the vigor of the finale’s main theme into better contrast. Fortunately, the finale is a movement that plays mostly to Lin’s strengths. As for the orchestra, Yu also found his inner Thor in the opening movement, yet elicited a fine, warm tone for the lyric theme, maintained that tender feeling in the slow movement, and in the finale brought the ensemble and soloist together quite satisfyingly.

The Symphony No. 2 in D Major, op. 73, is undoubtedly Brahms’s most popular, combining an irrepressible tunefulness with the tightest and subtlest use of cyclic integration. (Brahms wrote that its tunes came to him so plentifully that he had to watch where he stepped lest he crush them). Yu’s tempos in the opening movement ran fairly brisk, with no lingering on the “lullaby” second subject. He got a well-balanced sound from the instrumental choirs and paid due attention to dynamic contrasts. We would have liked a bit more equality, though, between the cellos and bassoons opening the slow movement, the better to savor Brahms’s slightly puckish nod to Wagner in contrasting chromatic with diatonic phrases. The gracious intermezzo that stands in for the scherzo brought forth some very fine playing from the winds, and in the faster trio delightful responsiveness from the strings in their off-accents. The orchestra once again ended well: it made a good stab at delicacy in its opening statement of the Haydnesque main theme of the finale (they were even better in the recapitulation), and again the tempo never let up for the famous second subject. The mix of professional and amateur players impressively negotiated the nearly nonstop syncopation of this movement, and as the refulgent peroration of the second subject signaled the end, elicited an ebullient response.

Comments Off on Brahms Casts His Irresistible Spell