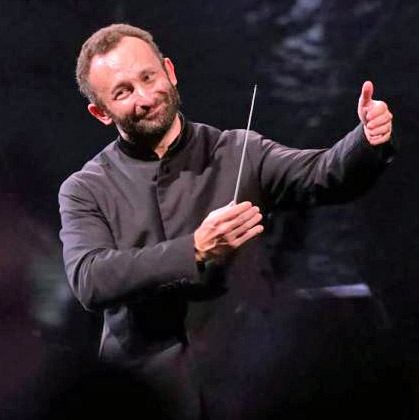 The world-famous Berliner Philharmoniker and its newly anointed Chefdirigent Kirill Petrenko gave a symbolic free concert on Saturday night that embraced the thousands gathered at the Brandenburg Gate in Berlin. The second concert in a series of five that takes the orchestra and its new commander to Salzburg, Lucerne, and Bucharest, along with violinist Patricia Kopatchinskaja,  dropped Berg’s Lulu Suite (as performed at the Philharmonie) for a potent artistic statement in Beethoven’s Ninth Symphony. The lead up to the momentous “coronation” of Petrenko produced a media sensation for the orchestra. Videos published days in advanced on social media showed off the prowess and passion of the 47 year-old, Russian-Austrian maestro. Maintaining his position as Generalmusikdirektor at the Bayerische Staatsoper through 2021, Petrenko assumes his new role having only guest-conducted the Berlin Phil a handful of times.

Philharmoniker players emphasized Petrenko’s understanding and respect for the historic role he assumes in the institution he now leads. “The whole history of the orchestra is sitting there… and he [Petrenko] embodies this respect and esteem in his position. He conveys it to every individual,” stated Olaf Maninger, principal cello. Rainer Seegers, timpani, expressed that “It’s fun working with him… To work in earnest while keeping the human touch is always best. This unique sound of [the orchestra], that used to exist…that’s his secret goal or wish, that’s what he would like to do…something is there again, that was there with Karajan ages ago: you risk as much as possible.”

Indeed, a symphony orchestra acts as a microcosm of society; it functions as an aesthetic model that not only realizes the musical ideas in a score, but also one that can shape, mold, and react to the historical moment it occupies. The Philharmoniker is no stranger to this phenomenon and the important, if not controversial role, it has played in its 137-year history. Reinventing itself out of the ashes of post-war Germany, this famous musical institution reckoned with the demons instilled during the Nazi period, with Furtwängler and Karajan et al as figureheads, and the question of how to reconcile the destructive past while preserving a lasting peaceful kernel of German musical culture. At present, this orchestra is the only major musical ensemble that votes in all of its members, in a unanimous decision among its 120-or-so musicians. In June 2015, they selected Petrenko in a white-smoke, Vatican-like process, as the democratically decided successor to Sir Simon Rattle. Petrenko is the first Chefdirigent of Jewish descent in the orchestra’s history.

As the concert began, the throngs of people were still agitated as they called for those closest to the stage, standing to take pictures, to sit: “SITZEN!” The mysterious bars of the Allegro ma non troppo e un poco maestoso first movement opened underneath the audience’s clamor, a fitting representation of the music itself, as the mumbling “chaotic” pedal tones around A finally resolved “in order” to a firm d minor chord. At this point, the audience mostly had become silently attentive.

Throughout, the listeners were totally captive to the moving lines and expressive capability of the monumental instrument that is the Berlin Phil. Beethoven, of course, always has an inner-forward-impulse, but in this performance, it was even more apparent. Petrenko conducted with little noticeable emotion; his calm and controlled focus allowed the orchestra to illuminate structural form, polyphony, really all the workings in the music. They played the coda with just the right amount of ritard, as Beethoven wanted.

Unexaggerated and direct, the scherzo second movement, Molto Vivace – Presto, gave space to hear the music as an unfolding passage of time. The famous Trio bassoon solo obbligato was in the tempo of the scherzo, not an easy task, but always surprising even from one of the world’s best orchestras. A quick, audible sniff from Petrenko after the “fake-out” return of the trio launched the orchestra into the closing bars. This was a spontaneous surprise!

The soulful third movement, Adagio molto e cantabile, weaved delicate cantilena melodies and variation obbligati among the woodwind soloists and string sections. If there was one movement to hear the Berliner Philharmoniker’s Altklang, this was the one. Shifts of color and tonality were rendered with exquisite phrasing, causing chills. The orchestra listened deeply to itself in this movement, aided and unhindered by the sensitive care of Petrenko’s baton.

Petrenko closed the third movement with hymnal simplicity, which caused the ensuing attacca of the Finale to be all the more apocalyptic. The opening bass and cello section solos engaged in a real dialogue, making this introduction really feel like an instrumental recitative juxtaposed by the intermixed splices from the other movements of the symphony. Petrenko’s chops in the opera pit absolutely aided this exemplary execution. The instrumental introduction to the fourth movement ended quite whimsically, again in contrast to the immense entrance of Kwangchul Youn, bass: “Freude!” The Berliner Rundfunkchor’s standing entrance following Youn’s opening solo was perfectly choreographed. Petrenko’s timing of the orchestra and chorus’s chords “vor Gott,” was overwhelming, eliciting applause from the audience mid-movement (as they had applauded every other movement so far, though at the end). The Turkish March variation ensued with characteristic pomp and the subsequent fugato was vigorously con brio. Petrenko heroically controlled the major-minor oscillations over the horn pedal before the entrance of the full chorus again in “Freude, schöner Götterfunken.” While I wished the conclusion to the symphony had transpired with more liberty and overwhelming inevitability, similar to Furtwängler’s emotionally potent interpretations with this ensemble, Petrenko found plenty of interpretive gusto. The soloists (Marlis Petersen, soprano (artist-in-residence with the Berlin Philharmonic 2019/20); Elisabeth Kulman, mezzo soprano; Benjamin Bruns, tenor; Kwangchul Youn, bass) were all superb – I have never heard such a well-blended and sonorous quartet. Youn projected his solos with an especially robust basso profundo.

Overall one experienced an undeniable aural bliss as well as an overwhelming sense of historical significance. Situated in front of the Brandenburger Tor, on the scars of the former Berlin Wall, that symbol of division and post-war tyranny, the stage faced west towards the setting sun and the distant looming figure of Berlin’s Victory Tower. Behind the stage, and the gate, sat Pariser Platz, as host to all of the post-war powers’ embassies (the United States, Britain, France, and Russia). This event marked 30 years since the fall of the Berlin Wall, 30 years since Leonard Bernstein conducted the same work at the Konzerthaus Berlin (changing “Freude” (Joy) to “Freiheit” (Freedom)), 30 years of the Berlin Phil’s partnership with Deutsche Bank, as well as a premature beginning to Beethoven’s sestercentennial musical celebrations in 2020 (everyone has the itch!).

This concert also served as a meta-symbol for our contemporary zeitgeist. Can Schiller’s words, can Beethoven’s music, can music as a unifying spiritual force embrace the millions? Can resurgent authoritarianism, climate change, and the walls (real or imagined) we impose on ourselves truly be torn down? Do we have a conscious ability to self-actualize and evolve as a society? Petrenko and the Berliner Philharmoniker begged all these questions. In Petrenko we find a small and quiet man who avoids dumbing-down a voracious, complex understanding of the world. In this conductor, we find a monk, not an ostentatious egotist. Petrenko gave us something more introverted than the hyper-emotional conducting one can observe on the Berlin Philharmonic’s Digital Concert Hall archive.

As history would have it – and the history of this orchestra and its Chefdirigents, especially – art can only act as a meditation on these matters of socio-political significance. Art should not be politically involved, yet must always be aware. Ideals truly exist in the metaphysical space that music, and its power over consciousness, inhabits, yet music can help cultivate the spiritual garden, and give us resolve to embrace our responsibilities.