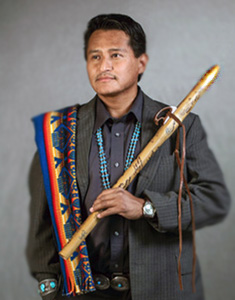 This week, Native American Flute concerts with Jonah Littlesunday are to be heard for the first time in New England. Nationally acclaimed Jonah Littlesunday, a full-blooded Navajo from Gray Mountain, Arizona, will be offering his spiritual and healing flute music, along with Navajo (Diné) history and folklore.

Upcoming concerts will be given in Gloucester, Manchester-by-the-Sea, and Peabody.

Give a listen to his Canyon Records album “Gratitude-Native American Flute Healing” HERE.

What may be surprising about “Gratitude” is its richness of content. Each of its eleven flutings possesses personalized poetry revealed in near-realistic musical depiction. For us “Bix to Buxtehude to Boulez” types, “Love’s Lullaby” might sound as if it were in a major key, even though it is in the world’s mode—pentatonic. Littlesunday’s full-throated flute delivers melodic friendliness and warmth accompanied by a steady drum beat that bonds Native American feet to the earth. Traditionally, boys would play the flute for mating purposes.

As with his other originals on the album, there is repetition, much like in pop songs, for the memory to latch onto. With the first two notes of “Veteran’s Bravery,” listeners may immediately latch onto Taps. Minor mode and slower tempo give a deep “feel.” “Dancing on Teardrops” opens with cries evident even to the youngest listeners. Here, the drum pulses in a short-long pattern. Short motives, rattle and steady drum make wonder-filled “For all the Tiny Tots.”

The wraparound wetness enhancements in the Canyon recording bother a bit, given the purity of Littlesunday’s work. There are high-pitched flute effects like the screeching wind in “Mountain Lion.” Through elevated calls in slowly unfolding intervals “Flight of the Eagle” depicts soaring effortlessly, ecstatically.

David Patterson, Professor of Music and former Chairman of the Performing Arts Department at UMass Boston, was recipient of a Fulbright Scholar Award and the Chancellor’s Distinction in Teaching Award. He studied with Nadia Boulanger and Olivier Messiaen in Paris and holds a PhD from Harvard University. He is the author of 20 Little Piano Pieces from Around the World (G. Schirmer). He has composed music for the Native American flutist and publisher James Pellerite www.notescape.net