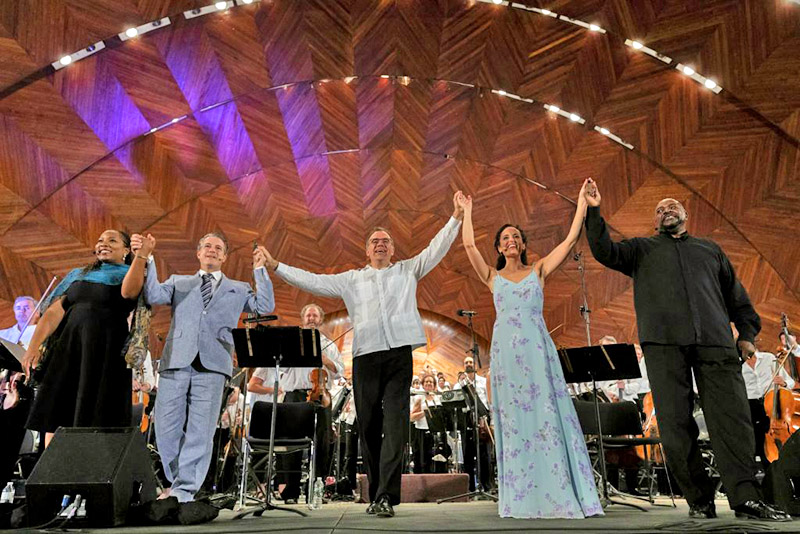 Its concert delayed by a day by weather until Thursday, Boston Landmarks Orchestra benefited from a gorgeous evening, replete with profound African-American music and composers to showcase work reaching far beyond its roots. Featured composers included the known and celebrated as well as the anonymous. Extensive background notes by Landmarks’ music director, Christopher Wilkins, as published in this journal, can be found HERE.

WCRB’s Laura Carlo, as well as Wilkins, provided introductory remarks reaffirming the intent of the late Charles Ansbacher, Landmarks’ founder, to create tolerance with musical accessibility. The evening importantly featured not only the regular ensemble, but also Boston Landmarks One City Choir under the talented David F. Coleman directing its city-wide and Coro Allegro ― Boston’s LGBTQ+ and allied classical chorus ― with its artistic director, David Hodgkins. The touch of advisor, the Reverend Emmett Price, III, enhanced the entire evening.  The initial half celebrated the African Diaspora, with the “Deep River” theme adaptively connecting the black and multicultural communities and people from Boston’s varied neighborhoods. Fittingly, near the Hatch Shell, the Charles River attains its greatest depth.

The versatile composer, performer and polymath, William Grant Still (1895-1978), a central figure in the Harlem Renaissance, wrote his prize-winning Festive Overture towards the end of the Second World War (1944). Tonight, a hint of the military, evident in Still’s opening pentatonic fanfare, played clearly by the brass, reminisced much African and Afro-Caribbean music. The theme shifted subtly to the violins. The trumpet section then briefly sounded a flourish. The second theme flowed expressively, followed by an easy restatement of the themes, conferring an optimistic mood. Children in the audience danced spontaneously from the start, and a music-loving and well-behaved dog barked only at the end of most offerings (the pup continued to contribute its bark to the applause, earning a benignly amused comment from Maestro Wilkins).

George Walker (1922-2018, the first African-American graduate of Curtis Institute) wrote what is now entitled Lyric for Strings as part of his first string quartet. In it, three arching segments present distinct voices interweaving and heading upwards and then enfolding within themselves. For my taste, this was the orchestral pinnacle of the evening, given the excellent musicians in the string sections. Though Walker garnered a Pulitzer Prize in music for his Lilacs for voice and orchestra, his Lyric for Strings is at least as worthy. The orchestral execution created the yearning sense fitting for this work and its initial title, Lament.

Four deeply-rooted spirituals then came in moving performances. Elvy Powell’s profoundly resonant bass-baritone voice has graced events for six US Presidents, and became the soul of the evening with his stirring and heartbreaking renditions of Didn’t My Lord Deliver Daniel (arranged by Lawrence Brown) and He’s Got the Whole World in His Hands (arranged by the late composer pianist, Margaret Bonds). When Powell sings, the ground reverberates! And the rising young Chicago-based soprano, Sirgourney Cook, sang Bonds’ versions of Joshua Fit the Battle of Jericho and, I got a Home in the Rock.

The British Michael Tippett, the only non-African-American composer in the first half, adapted the soothing strength of spirituals in composing A Child of our Time, an oratorio in which an arrangement of Deep River profoundly anchors the last movement. Soprano Cook, and tenor, Davron Monroe, as well as mezzo soprano, Myran Parker-Brass and bass, the Hon. Milton Wright, sang this iconic rendition. Their strong voices lent fitting character to the work.

Monroe, who holds a Masters in Music in opera from Longy, soloed along with the chorus in R. Nathaniel Dett’s, Chariot Jubilee, orchestrated by Hale Smith. Dett, a Canadian-American black composer, pianist, organist, choral conductor and professor of music, wrote the music and words for Chariot Jubilee while a Harvard student early in the 20th Century. This orchestration movingly clarifies an homage to Dvořák, as well as the biblical words; Monroe’s sonorous voice carried well with the effective sound system.

A gem, the final movement of Fred Onovrewosuoke’s (2016) A Triptych of American Voices: A Cantata of the People―We NEED to TALK—featuring soloists Tai Oney, countertenor and Jonas Budris, tenor, plus chorus and orchestra. This setting of the late Michael Castro’s poem, which closed the first half, combines hope, freedom, justice and joy—all evident in the sound and faces of the soloists and choristers.

After civil twilight faded to nautical, highlights unfurled from Jerome Kern’s Show Boat, which Arthur Fiedler promoted it here in the early days of the shell. Not just for its catchy, appealing music, do we enjoy this hugely popular show, but also for the way Edna Ferber’s book and Oscar Hammerstein’s lyrics addressed bigotry almost 50 years before the Civil Rights Act. Though its songs have been known to much of the audience seemingly forever, its many messages about the human condition are not.

From the Overture, and with the help of the several chorus sections, those who have seen the show or one of the film versions were carried through the compelling tale. The well-placed soloists and chorus projected well into the vast crowd. Matthew Battista’s “Where’s the Mate for Me?” resounded in his compelling tenor; Jennifer Ellis, as Magnolia, projected sweet innocence and excitement in her first duo with Battista’s Ravenal and, later the pair convinced the audience of their connection in “You Are Love” and “Why Do I Love You?” Cook’s Julie, with her costume changes, convinced the audience of her changes with time, in “Can’t Help Lovin’ Dat Man” and “Bill.” Carolyn Saxon’s clear soprano and the chorus moved the audience with “Misery Theme” and its implied ethical issues. Powell’s reverberant bass-baritone made particular magic of “Ol’ Man River.”

In fine voice all, the soloists effectively conveyed the bittersweet, the comic and the tragic. sense that goes along with universals– profound love, process and, loss. The audience interrupted with applause after many numbers, and walked off into the clear night humming.

Comments Off on Deep and Profound Along the Charles