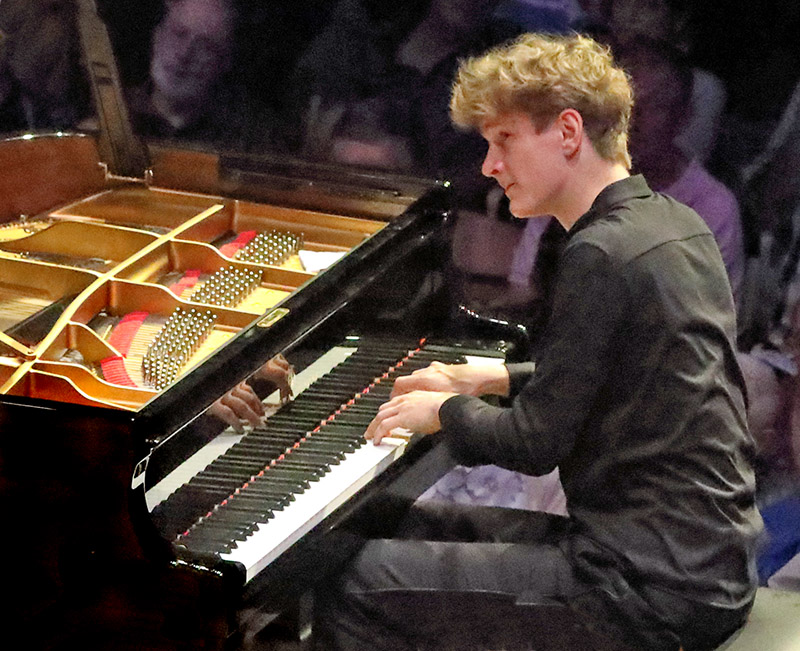 Jan Lisiecki, a lanky, 23-year-old budding superstar from Canada, thrilled the Tanglewood audience Friday night with a vivid, colorful, beautifully shaped traversal of Grieg’s Piano Concerto in his Tanglewood debut; he performed the first Chopin concerto in Symphony Hall a year ago. No doubt because of his Polish name and ancestry, many of his early awards and triumphs involved the music of Chopin. Already at 13 and 14 he had recorded the two Chopin concertos in live performances.

In Grieg’s lovable concerto, redolent of Norwegian folkdance and scenery, but possessing Lisztian piano rigor, he ranged effectively (and, when necessary, instantaneously) among the pounding descending chords that open the concerto and the hushed figures that make up the main theme of the first movement, giving  singing, almost hymnlike melody to the Adagio, and taking athletic leaps in the last movement’s sprindans. Lisiecki and conductor Andris Nelsons shaped the phrases and tempo adjustments in a unitary spirit, as piano and orchestra resounded with authentic colors.

The pianist encored with Schumann’s “Träumerei” (“Reverie”) from Kinderszenen, Op. 15.

The concerto served as the filling for what might be called a Copland sandwich, between his Third Symphony and the opener, Quiet City—a short instrumental piece very different in character from those Copland works that are best known. He composed it for what might be called a “problem play” in 1939 (the problem in question had nothing to do with the fact that the play closed in short order!). Copland worked some of the musical ideas in his score into a short concert piece for trumpet (representing the principal character), English horn, and string. Principal trumpet Thomas Rolfs and English horn player Robert Sheena played with great beauty and they produced the aching and tormented emotions expressed in the play.

The second half offered Copland’s largest purely orchestra work, his Third Symphony, composed late in World War II on a commission from Serge Koussevitzy and premiered in the fall of 1946. By the time he got going on it, Copland understood that the war was almost over and that the victory would go to the Allies. He thus wanted to write, in expressive terms, something appropriate for the postwar mood of positive energy, tranquility recovered after years of intense difficulty and massive loss, and, finally, of celebration.

Nelsons shaped the first-movement arch beautifully form the opening “with simple expression” through the agitated climax back to the mood of the opening, with clean, unfussy playing by the strings, the woodwinds, the trumpets and trombones at climactic moments, in Copland’s spacious “open air” style. The principal woodwinds projected their various solos with a cool warmth, if that antiphonal image may be allowed: the oboe in the middle of the second movement, the lovely flute theme followed by a dancelike duet for clarinet and bassoon in the third movement,

After the third movement died away, woodwinds quietly sang out phrases from the Fanfare for the Common Man. Even today, 77 years after Copland created it as a 2-minute stand alone for Eugene Goosens and the Cincinnati Symphony, it remains Copland’s most iconic moment. After rapt anticipation, the rich and glorious fanfare in its expanded version broke out in full, rich glory. A lively dance followed as a counterpoint.

Nelsons brought these elements together in a joyous, inspiring climax.

Comments Off on Lisiecki Wows in Grieg; Copland Thrills