In the People’s Republic of Cambridge, it is fitting to have a people’s orchestra, ascendant with the mercury each summer like the murmurings along the Charles. Since 2008 the Mercury Orchestra —an accomplished  volunteer contingent  directed by the musical polymath, Channing Yu, has more than fulfilled such expectations. The group bestows a three-concert series each summer, thoughtfully programmed, artistically gratifying, and greatly appreciated, based not only on the milieu and mood but on a consistent history of exciting concerts. Mercury’s first of this season, focused Sunday on late-romantic works ranging from romance, through marriage, illicit love and ecstasy to death—and did not disappoint.

The Concert Suite from Debussy’s sole completed opera, Pelléas et Mélisande, as arranged by pianist-conductor-composer Alain Altinoglu, constituted a fortunate choice for the opening half. Altinoglu, who premiered the work with the Berlin Philharmonic, successfully continues the tradition of many conductors who adapt longer works of others as orchestral suites. In an interview with Durand Salabert Eschig before the premier Altinoglu said, “I find it fascinating to study the choices made by the composers (or those tasked with arranging the suite) and what they kept from the original work; it allows us to imagine which passages they found most important and perhaps even their satisfaction in reusing them.” While others have arranged suites from Pelléas (Pierre Monteux, John Barbirolli, Eric Leinsdorf and Marius Constant among others), this version is unique, focusing on orchestral vision, without showcasing individual instruments for character voicing. The version heard here encapsulated a quintessentially “Debussian” feeling. The playing, if not entirely faultless, came close. Musicianship abounds in each stand of Mercury; indeed, the audience more than appreciated the effort.

Stravinsky wrote his Opus 5, Chant Funèbre (Pogrebal’naya Pesnya), for a 1909 memorial concert to honor and remember his mentor, Rimsky-Korsakov, who inspired many of Stravinsky’s other works and had died the year prior. Currently considered a “transitional” Stravinsky piece, between the early works and Fireworks and Firebird, the score vanished for 106 years after its memorial performance until rediscovered in a building at the St. Petersburg State Conservatory. Stravinsky probably would have been thrilled, as he had said, “I remember the piece as the best of my works before Firebird, and the most advanced in chromatic harmony. The orchestral parts must have been preserved in one of the St. Petersburg orchestra libraries; I wish someone in Leningrad would look for the parts, for I would be curious myself to see what I was composing just before the Firebird.” Fortunately, this discovery has inspired others since its re-emergence, for example, a one-movement piece for wind band by Utsyo Chakraborty dedicated to Stravinsky. Here, the instrumentation lent itself to the assembled talents: three flutes (one doubling piccolo), two oboes and English horn, three clarinets (one doubling bass clarinet), three bassoons (one doubling contrabassoon), four horns, three trumpets, three trombones, tuba, tympani, cymbals, bass drum, tam-tam, piano, two harps, and strings. Chant Funèbre begins as a deep and private lament within the orchestra, until flutes and violin open it up a bit, allowing, as Stravinsky himself noted, “all the solo instruments in the orchestra file past the tomb of the master, each laying down its own melody as its wreath.” And its ending is soft and plaintive. In the concert, each did just that.

La Poème de l’Extase, which Scriabin at times called his 4th Symphony, provided a dreamy close. Scriabin explained it with searching, self-reverent hyperbole, in this case worth some indulgence. An expressive, incantatory piece, it wafted through Sanders imparting an air of ambiguity, given its whole-tone basis and minimal key focus. Mercury played the polychromatic slow theme languidly, and a faster theme with leaps and trills incisively. The horns and trumpet played the last theme with its tripartite sections with precision. The orchestra developed the combining of these motifs masterfully, with the strings and woodwinds adding trills and tremolos at an early and late climax, in which the trumpet and percussion ostinato pulsed. 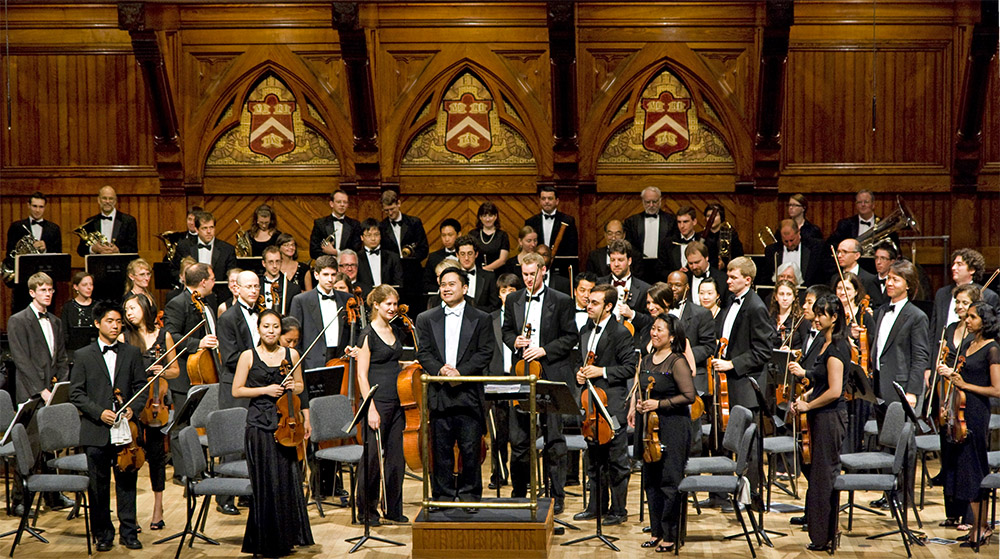 Mercury has become a local gem, with its dedicated conductor and talented forces. Two concerts remain:  (Wednesday August 7th at 7:00 PM at the Hatch Shell (Stanford and Beach) and Saturday August 24th at 7:30 PM at Jordan Hall (All Brahms) will be more than worth attending.

Julie Ingelfinger, a classically-trained pianist and nearly congenital music lover, has a passion for thematic programming. She enjoys her day job as a deputy editor at the New England Journal of Medicine and a professor of pediatrics at Harvard Medical School.

Comments Off on Mercury Ascendant