When Rockport’s Artistic Director Barry Shiffman caught the Takács Quartet in rehearsal, he could not believe that even after myriad performances since 1975, the quartet would still be hammering out interpretive ideas. The foursome, undoubtedly continues to maintain first-tier status despite having but one original member still playing.

Mozart’s “Dissonance,” Bartók’s Fourth, and a Beethoven “Razumovsky” formed a kind of arch before a sold-out Shalin Liu Performance Center Saturday. An outcome of too much of everything too often, though, could point, perhaps, to overfamiliarity. Shining moments certainly came to us: the slow mysteriously roaming openings of the Mozart and Beethoven; the “abstract” opening movement in the Bartók turned tangible; and a developing transparency throughout the Razumovsky. But with far too few exceptions, the beloved Takács Quartet hindered access to these three profound inquiries into the string quartet genre by going deeper and deeper into musical discourse that made it more a listening challenge.

More specifically, what may have further clogged the air could be traced to the motivic tongues the composers shared in their searches. “The quartets are, indeed, the fruit of a long and laborious endeavor,” wrote Mozart. Annotator Keith Horner also reminded us that with Beethoven’s Russian quartets “The Viennese public and musicians of the time, however, had difficulty with them.” Motives, or melodic fragments, from Takács’ point of view would, at times, reach saturation levels, and this remained true for Bartók as well.

A hypothesis is in the offing. With the remarkable probes of Mozart K. 465, Beethoven Op. 59, and Bartók BB.95, then why not equivalent probes of performers, in this instance, Takács? This, then, begs the question of listeners needing exposure in order to keep pace. Takács seems to have investigated and re-investigated over and again, a natural act surely for artists of high standing caliber. Yet, in today’s internet times, if one is not a string quartet aficionado or a Takács groupie, will the inevitable result be “and never the twain shall meet?”

Takács Quartet certainly has lost none of its robustness. It may not even be accurate to accuse Takács of playing into the “new norm”—pushing the envelope further and further. Rather, violinists Edward Dusinberre and Harumi Rhodes, violoist Geraldine Walther, and (original) cellist András Féjer delved deeper into their exceptional acumen as the interpreters.

The extensive motivic exchanges in the opening Allegro of the Mozart received so much detailed attention from each of the imitating instruments as to pretty much deny any larger arching structures. In contrast, minimalism’s power popped into mind. 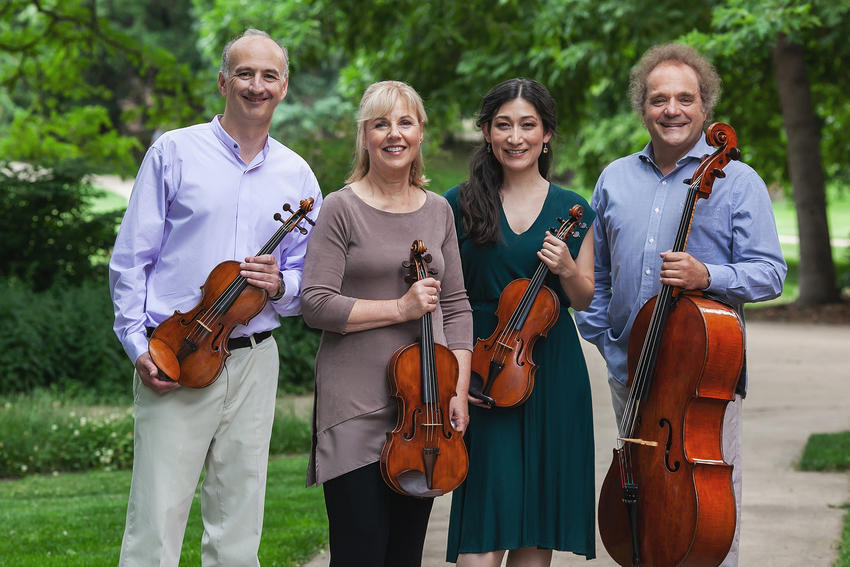 Dusinberre directed the appreciative summer concert-goers’ thinking toward arch form in Bartók’s Quartet No. 4, its five movements designed as ABCBA. In his brief analysis preceding the Hungarian’s work, Dusinberre pointed to the matching thematic material of movements one and five, and that of two and four, then warning that we probably would not be able to make the connections—but not to worry. He described the opening Allegro as “abstract” and, thankfully, Takács narrated the dissonant motivic-making into formidable coherence never quite experienced before. The guts of the Fourth, its rawness, gave way to the Quartet’s deepening imagination, unrelenting and unapologetic. Their “creepy, nightmarish” (Dusinberre’s words) vision of Prestissimo, con sordino opted for inner timbral meaning, while their “humorous” Allegretto pizzicato had to have served far more fun in Takács’s testing listeners to keep pace with a convoluted dare.

The arching structure of the entire program, smart and arresting for far too many reasons to mention, basically formed around the key of C major with Mozart and Beethoven being the bookends to the Bartók—which, astonishingly, cadences on C.