The BSO always aims to open its Tanglewood season with a favorite soloist and especially popular composers and works. That aim was clearly to the fore on Friday night, when Emanuel Ax returned for a concerto, as he has every year since 1980, while Andris Nelsons chose Mahler’s giant Symphony No. 5 for the second half. Favorite music, favorite performers, and perfect summer weather made for a very happy event.

I’ve always thought of Mozart’s Concerto in  E-flat Major, K.482, as one of his lighter contributions to the repertory, stately in the beginning, and willing to take its time, darker in the second movement indeed, at least when it is in its main key of C minor, but extensive stretched in the major featuring woodwinds are more tranquil in character. And the finale is a charming jig aiming for a dramatic ending that is wittily undercut by a couple of winsome phrases from the soloist.

The orchestra for the first half was rather larger on Friday evening than we often find for Mozart, but the composer himself would have loved it, given his enthusiasm for the large orchestras he experienced in Paris. In any case, a hall the size of the Koussevitzky Music Shed, with the broad Tanglewood grounds spreading out at the back and sides by itself justifies the expansion.

Andris Nelsons balanced the sections beautifully, allowing the ever-changing featured instruments (especially Mozart’s magical winds) to take their turn in the limelight, then recede so that another comes forth. And in dialogue with the orchestra, Ax was both elegantly lyrical and joyously playful whenever Mozart gave him the opportunity. This was not “little” Mozart, but a full-throated performance, which projected into the shed admirably.

There was never a question, of course, as to whether Mahler’s 5th symphony could fill the shed. From its first solo trumpet’s martial call, the resonance was brilliant, richly varied (no surprise from one of the greatest orchestrators of the age) and dynamic. The conductor of any Mahler symphony must be much more than a simple traffic cop, signaling starts and stops. There is an infinite range of dynamics, from the full brass sounding the opening fanfare to the delicate opening of the famous Adagietto (the fourth movement), which needs to begin at almost the threshold of hearing. Andris Nelsons is particularly adept at this kind of late 19th-century romanticism, with a large orchestra in with the instruments roil (in loud and dynamic passages) but whisper delicately in sustained places—and in Mahler, these all occur in rapid succession, with changing colors and levels of volume. And beyond that, he controls the constant changes of tempo, sometimes changing very gradually, and elsewhere making theatrical, sudden moments of moving to stasis or taking off in a wild race. 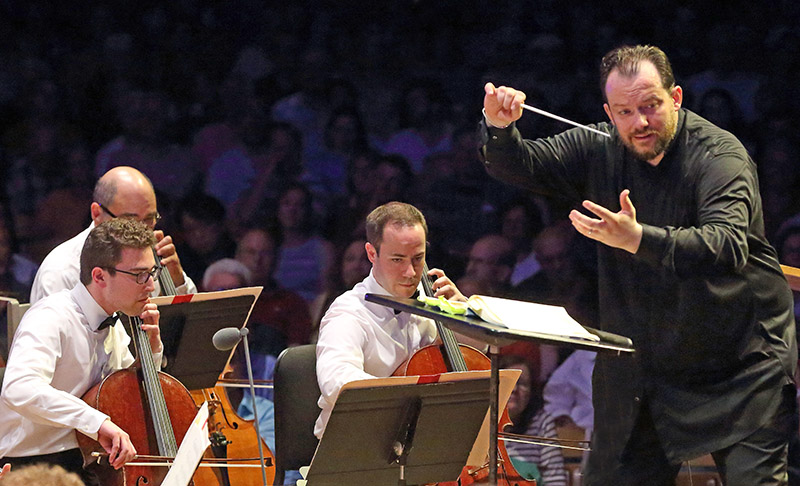 The wildly whirling waltz of the scherzo, the breathtaking pauses and soaring climaxes of the Adagietto, and the humorous satire of the finale’s opening, designed to suggest a singing contest judged by an ass, but developed with prodigiously wild and vigorous counterpoint, building to the burnished D-major of the celebratory finale—in all these things, the orchestra was both measured and dynamic, evoking an enthusiastic response from the audience at its close.

Hearing these two varied masterpieces of Austrian composers played with such affection, color, delicacy and drive, I couldn’t help feeling that in its current state, the Boston Symphony is a happy orchestra, one that plays not simply out of professional responsibility, but with real joy, a quality that is imparted to the audience as well, certainly to the one around me on Friday night.