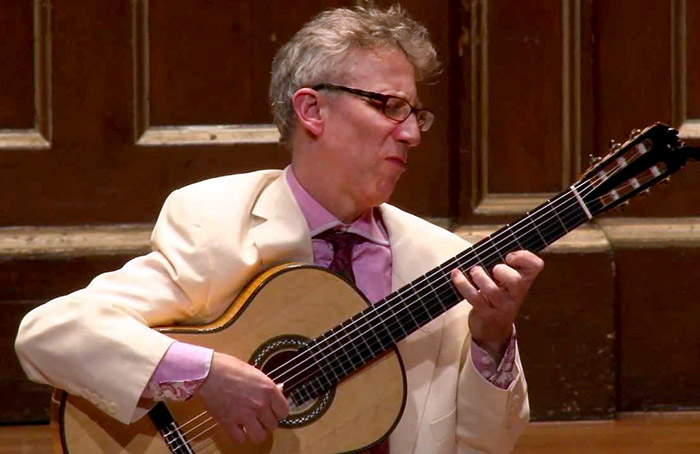 Eliot Fisk’s June 29th Jordan Hall recital sailed forth without being encumbered by its great length. This, the second to last concert of the 14th Boston Guitar Fest, featured the Artistic Director in a potpourri of music from four different centuries. Where some recitalists greet their repertoire donning a monkish and introspective all black uniform, Fisk came out the stage door in an off-white suit over a crimson shirt. This provided but one of many reasons that attention needed to be paid to the consummate and generous guitarist. A grand journey followed wherein the various styles appeared as regional dialects of a greater language of expression.

Fisk welcomed us in with the gentle steady repeated notes of Santiago de Murcia’s Grave and Allegro after Corelli, which opened with a memorable intonation that evoked the morning which precedes a long day and in which nothing ought to be disturbed. The Allegro, however, provided just such a disturbance. Despite all of its modal alternation, strummed chords, and dancing, Fisk maintained a sense that the deep peace depicted in the Grave had not been uprooted and the Allegro summoned a charming feigned peril.

Two more baroque pieces, by Louis Couperin and Sylvius Leopold Weiss, closed out the introductory set. The guitar spoke amiably in this opening trio which Fisk transcribed. This congenial atmosphere allowed for the success of the varied repertoire choices that included around 30 individual movements by eight different composers.

Fisk then turned from the baroque to delightfully prim, classical regularity of phrasing and rhythm found in Fernando Sor’s Etude in G Major, Op. 6 no. 4. Two Sor transcriptions of “Das Klinget so Herrlich” from Mozart’s Die Zauberflöte followed. The shorter transcription (Op. 19) whose harmonics recall the glockenspiel from the original, effectively served as a warm-up for the larger two-part Op. 9. Fisk played the introduction of the Op. 9 with a gracious severity that matched the solemn timelessness of the opera’s pathos. Any personal indulgence on the part of the player weakens the starkness of this sort of introduction. Aware of this, Fisk imbued it with such nobility and discernment that the introduction served as a perfect counterbalance to the variations that followed.

Above all a concert is a sonic event and in the variations of Op. 9, Fisk showed that his imagination and control of sound has no limits. Fisk combined articulation, resonance, and timbre to such spell binding effect that this virtuoso piece came off as a gracious offering. It was clear that this difficult work had been in Fisk’s repertoire for so long that every gesture and phrase, like an appreciative feline, was caressed in precisely the right direction.

For me, Fisk and Nicholas Cords’s rendition of Schubert’s Arpeggione Sonata provided a new perspective on the classic work. Though I found myself disagreeing with many of the interpretive choices, the sheer relentlessness of the deviance shown by these undoubtedly expert performers kept me involved until the end. Conviction overrode many of my concerns over interpretive taste. In some of the more befuddling details however, the guitar stripped the viola of its significant moments such as the dominant chord elaboration between the development and recapitulation of the first movement, the phoenix-like transition from the second into the third movement, and the retransition into the final A section of the rondo (the handout identified this as Fisk’s transcription). Before one could worry overmuch about what these alterations achieved, the moment had passed.

As I read it, the opening has a metrical squareness reminiscent of the D. 784 Sonata in the same key. Fisk’s reading represented more of a trapezoid with a slanted eagerness to reach the next gesture. This demarche recalled Hung-Kuan Chen’s brilliant if somewhat bemusing performance of Schubert’s equally square (in meter) Piano Sonata D. 959 in Jordan Hall last fall. Of course, any great performance owes part of its success to the quality of rubato but when a passage places emphasis on the first and third beats of a duple time signature, leaning forward can hinder the stable qualities of the music. To my mind, Schubert’s writing calls more for continuation not in the metrically regular opening but in second beat accents found in the repeated denial of cadences at end of the exposition of the Arpeggione.

A coda sizeable both emotionally and by measure-count, rounds off the first movement of both the Arpeggione and D. 959 and here Fisk and Cords, through nostalgic calmness, finally departed from the agitation that came before. This moment, as well as the opening of the first and second movement, showcased Cords’s most touching choices of timbre. One could only smile at each return of the soothing A sections of the rondo as they rose gently higher and higher in spirit while Fisk and Cords bid adieu to this lovely work.

Robert Beaser’s arrangement of the American tune “Shenandoah,” which Fisk edited for Pennsylvania publisher Helicon Music, made for a pleasant start for the second half of a concert that heavily featured European if not Germanic examples. It occasioned a serene contemplation of Americana and daydreaming about how many diverse roles the guitar plays for different cultures. The chord strumming and quasi-riffs in the middle of “Shenandoah” made one keenly aware of the ocean as well as the centuries that separate Beaser from the rolling scales of Weiss’s baroque Passacaille. The gentle ending evaporated like morning dew and contributed to the American theme of repose in the contemplation of ever-expanding nature.

No fewer than 20 excerpts from George Rochberg’s Caprice Variations closed out the show. With help from Rochberg, Fisk reworked the entire composition (originally for violin), making his affinity to these variations most evident. Highlights included the Moderato con umore that bumbled along like a misshapen wheel, the Furioso that made extremely effective use of extended techniques, and the serenely colored Andante movements. On the whole, Fisk painted the Rochberg as a Bruegel-esque canvas where the variations represented characters that could be carelessly rude to each other just as easily as they could console one another from past misery.

Having known Rochberg as a sour anti-modernist who has a little more than his fair share to say on the topic “authenticity” (especially in the essays found in his 2003 collection “The Aesthetics of Survival”), I was happy to find a more stable sincerity in the work which featured last night. Fisk, with his earnest devotion to character, found varieties of expression that rose above a single stylistic mold.

With the five-course meal finished, the spirits came out as the audience tasted two encores. The warm and nostalgic second movement of Federico Moreno Torroba’s Sonatina preceded another Fisk transcription, the Prelude from Bach’s G Major Cello Suite. The music flowed from atop a dozen roses that had been individually thrown onto the stage, and in these encores, Fisk’s playing as well as his body language endeared him even more to the audience.

Performers, perhaps for reasons of branding, often place themselves too far on one end of the spectrum of styles. The urtext regiment often characterizes freer interpreters as charlatans. Fisk clearly has nothing more to share than his love of the music. This love bore many faces throughout the evening and with the dulcet closing encores, Fisk repaved any potential rifts that might have opened between the audience and the stage. Fisk searched for the common message within each stylistic dialect. When he finally left the golden light of Jordan Hall for good, the audience could only admire the outpouring of musical exploration the maestro had laid forth.

Comments Off on Where Style Is But a Dialect