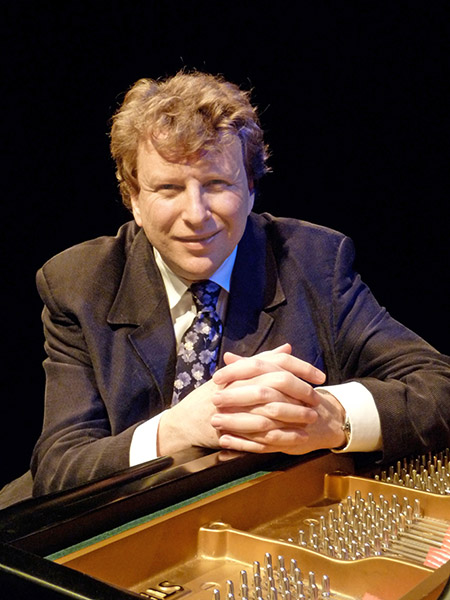 London-based Australian pianist Piers Lane programmed the full book of Chopin’s 21 Nocturnes in a mini-marathon recital on Friday night for the Rockport Chamber Music Festival. Each work, artfully sculpted and brought to life with superb, singing melody, subdued harmony, and utmost attention to detail, made for a satisfying evening, and a satiated crowd. Too much of a good thing? Maybe. Not according to this audience.

Lane knows these works like the backs of his rather enormous hands, which were always balanced over the keyboard, producing beautiful sounds throughout the event, with only the occasional angry, ugly (intentional) jab at the keyboard. Perhaps, on occasion, a little more anger was warranted. But that’s quibbling. This was playing of true intellectual rigor and study, and of real love for the music.

While each Nocturne was self-contained, Lane played them in sequence, and in groupings by opus number, without pause between the individual works within each opus, revealing marvelous connections, spanning the composer’s lifetime. He gave three posthumously published works at the end, almost (but not quite) as encores, in some ways providing some relief from the building complexity, if not intensity, of the progression from the youthful op. 9’s through to op. 62. It would have been, to my thinking, equally satisfying to have heard these three Nocturnes first, but not as appropriate, or fitting. Interesting to note that Chopin had wanted them destroyed.

Lane’s transparency at the keyboard—nothing was hidden—demanded, and received, attention. But I had a little trouble hearing his brief remarks between many of the opus sets. No matter. The playing spoke for itself. Candlelight was superfluous, with the background sea. No matter.

The first two Nocturnes were not so satisfying, though it’s difficult to say why. With several of the early Nocturnes, Lane added some improvisation. In op. 9, no. 2 (we were warned that his edition for this work was different) the flourishes and trills didn’t add, or add up. This piece just didn’t want to seem to go away. We also soon became aware that we would be in for some seriously slow tempos through much of the night.

Then came op. 9, no. 3. Surprisingly, so few pianists follow the detailed editing and articulation of the composer in this work. Lane did, and it matters. Every note and accent (including the 2nd and 5th eighth notes in the left hand) was articulated with élan, bounce, and so much singing melody, the phrasing and micro-phrasing creating superb arcs of music-making. Almost waltz-like to start, this work is fascinating in it’s development. The “2nd theme” is one of Chopin’s most beautiful and wistful, building in each of its two iterations with some anger and power. Gorgeously rendered. The middle section also troubles many pianists; most don’t seem to have any clear conception of what they want to do with this section. It’s ugly. Or is it? Or is it supposed to be, with all that relentless chromatic badgering in the left hand and harsh chords above. Lane’s excellent solution was to romantically smear and blur the left hand in the background, while unfolding the more violent and dissonant chords above, all quite fast, and so clearly structured for dramatic effect. And suddenly, over. The opening theme returning as if none of this took place, followed by a Chopin signature nocturne-ending with a big but delicate, dissolving flourish, Lane using both hands to execute the “right hand,” an idea that I stole immediately.

Lane opened op. 15, no. 1 with as much cantabile lilt and sweetness as imaginable. (I was forced decades back to play the melody, the right hand, of this piece—and all the embellishments!—with a pencil, eraser end to the keyboard thankfully, to project the melody using the full arm.) Lane’s melody projected and floated over a low plane, like a hovercraft. Then the storm. Where others work to express anger in the middle section, Lane’s playing was all “big, wailing and sad cello” in the left hand and those subservient, frustratingly not-very-easy-to-play broken chords in the right hand, crisply articulated. Ah, then the sweetness returned, for as fine a rendition of this work as that of his (Lane’s) op. 9, no. 3.

Lane’s take on op. 15, no. 2 was so slow, turtle-like. But much of the abundant ornamentation seemed rushed, rabbit-like. Pace, volume, and pleading drama in the middle section provided contrast. In the end, it came together nicely.

Op. 15, no. 3 is a work rarely performed. There is no mirror (ABA form) to its structure. It moves forward, and evolves, strangely. And yet it’s so accessible. Victor Lederer describes the opening as “a contained melody over an oddly limping accompaniment,” a coy description. The gentle piece is a brilliant exercise in quiet understatement, and subtly, sublime expression. It’s in ¾ time, and the bass does not introduce any sound on the 3rd beat (thus the limping) until the tension builds to bar 77, an incredibly disciplined, and discreet, feat from the composer. It’s more Mazurka-like than any other Nocturne, but more modest than most of Chopin’s Mazurkas in its harmonic meandering. All of this description is to say: Piers Lane’s interpretation of this little gem of a piece might have been the most memorable and poignant of the night, his nuanced style of playing lending itself so well to this particular creation. In the “religioso” middle section “chorale” he voiced the “chordal melody” with only a slight emphasis on the top note, while he projected, still sotto-voce, the one-note bass line in perfect balance. The chorale section gave way to a new dotted rhythm idea in the foreground, simple chords in the background. Lane also added a few delicate notes to the score, early on. Nothing intrusive. Simple. Lovely. Memorable.

Lane’s conception of op. 27, no. 1 in C-sharp minor was also memorable. Not simple, not lovely (except where it should be, at the end, when Chopin gives in, with an accepting resignation—brief jubilation, anger and fear having subsided.) Lane opened this masterpiece with the craggy, dark base line ringing like bells far away, each one distinct but flowing together. The dissonant melody snuck in with foreboding. This piece asks much of the listener, but attention is well rewarded. A second musical idea, dotted rhythm over chromatic, snarling triplets (but not like the potentially annoying triplets in the middle section of op. 9, no. 3) became insistent, pleading, building to an ecstatic climax, now in A-flat Major, and perhaps one of only two fff markings in Chopin’s Nocturnes. But the same idea continued, bringing back more foreboding and anxiousness. Then more beautiful, new music, building towards the other fff, and the inevitable return of the dark material that began the piece. Lane’s left hand, with the return of this music, summoned images of an oar dipping into dark waters, with no light for navigation. Just as quickly, all is calm, we’re in C-sharp Major, the big arpeggiation in the left hand now grounded, complete stillness at the end. Lane spun out this narration with utter respect to the composer (all the markings are there; nothing needs to added or altered) and a perfect sense of scope, scale, and drama. A breathtaking performance.

Lane took the “Lento” tempo to heart in op. 32, no. 2. With such slow playing, he needed to project and accent every note of the melody, doing so with such consistency that he maintained the illusion of a cantabile melody. It was as if someone had taught him to play with the eraser of a pencil (though he had ample leverage in each long finger). What stood out in op. 37, no. 1 was Lane’s lovely “wailing” in the tenor voice (D, E-flat, D).

I couldn’t quite make out Lane’s quoting of Ravel talking about Chopin’s nocturnes, before the pianist launched into what is probably the biggest of the Nocturnes, op. 48, no. 1. Something about “agonizing solitude” and “despair.” Lane’s was yet another really fine performance, but I was left wanting a little more agonizing despair, and a greater emphasis on the top melody with the passionate return of the opening material. His take on op. 48, no. 2 was deliciously mournful, with the left hand always way in the background, and such projected melody unfolding up to the wistful ending.

I must confess to a little fatigue at this point (though clearly the pianist was not feeling any) and to finding the opening theme of op. 55, no. 1 banal, regardless of player, so I should have recused myself. But the stretto ending was marvelous (and welcome).

The next three Nocturnes are, and were, on Friday night, revelations: op. 55, no. 2, and op. 62, no’s 1 and 2. They unfolded as expected, with grace, warmth, keen intelligence, and artfully differentiated character. There was wonderful voicing, staccato against legato, with the multi-melodies of op. 55, no. 2. The 2nd section of op. 62, no. 2 was a joy to hear, Lane playing with the most freedom (rhythmically) of the evening, leading to the stratospheric wonderful, indescribable bars 62 to 68, just before the trills. And the “cello” playing in the left hand of op. 62, no. 2 was rich and wonderful. In nearly two hours of playing, there were, to my ears, two seconds of lapse in concentration from the pianist, rather astonishing. 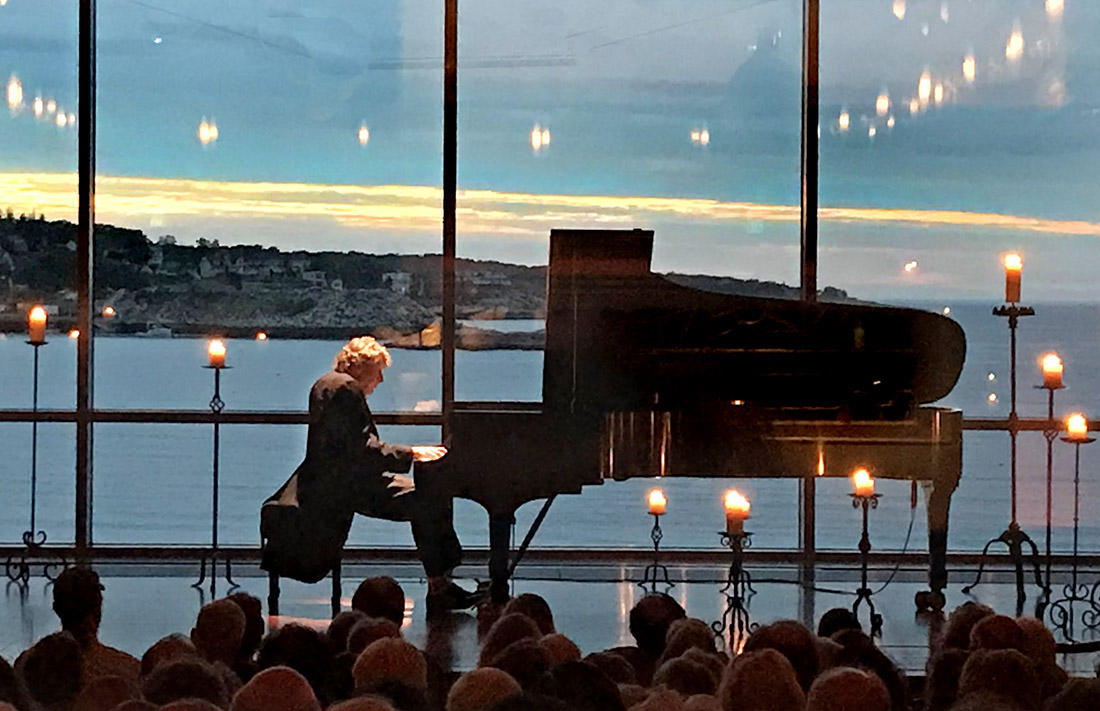 Without pause (as announced), Lane played the three posthumous Nocturnes, reversing the order of the 2nd and 3rd, to end with the popular (not destroyed) C-Sharp Minor Nocturne. The E-Minor Nocturne was hypnotic and lovely, from first note to last. The Eastern-European sounding C-Minor Nocturne was appropriately quirky and good filling for the sandwich of the other two Posthumous Nocturnes. And everyone loved Lane’s C-Sharp minor, so delicate in places, with those scales played so lightly, and just right.

Appropriately, there was no encore. If he had opted to play, it’s likely we would have heard the full cycle of Preludes.

Comments Off on Great Night Music From Chopin Via Lane