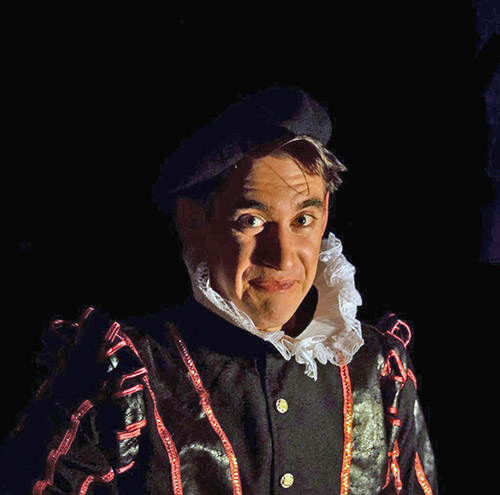 After garnering critical acclaim in the Edinburgh Fringe Festival and Adelaide Fringe, David Hughes’s Elizabethan landed on American shores as part of the 2019 Boston Early Music Fringe on Saturday evening in the King’s Chapel Parish House.

The performance was equal parts comedy and concert: dressed in a modest piccadill, black leggings and crushed velvet, Hughes opened the evening with a few apologies for the off-color jokes to come. Caution was thrown to the winds, however, as the show ripped into a bawdy Tristram Shandian bildungsroman told through the person of Tobias Bacon, who, we are told, died 400 ago. We hear of Bacon’s boyhood in England, where he masters the egg-and-spoon race, learns to love tobacco, and dies of a nasty cough. Audience members are pulled from the front rows to play his various loves and help unfold the story.

Even for those immune to Elizabethan’s charming antics, there is much to hear and see. Sharing the stage with the evening’s whimsy are lute songs by 16th-century greats Dowland, Morley, Campion, to name a few. This is the heart of the performance: Hughes proffers this range of songs in character while accompanying himself on the instrument. As Bacon, Hughes has a rich, pleasing baritone, as full of character as the ditties demand, Dowland’s “Lachrimae” and Hume’s jovial “Tobacco is like love” particular favorites. But Hughes is most impressive when he dons the wig of one of his many love interests and swoops into a clear and exquisitely controlled falsetto (perhaps given all the demands on him, he could be forgiven the lapses in enunciation in his upper range). There were a number of instances of spectacular forays into those heights, Morley’s “Will you buy a fine dog?” perhaps the most spectacular.

Among his professional singing experiences, Sudeep Agarwala has performed with many local choruses, including Cantata Singers.

Comments Off on Hughes Solos Beyond 17th-c Fringe