In just under an hour’s drive from Boston we arrived at the Museum of Russian Icons in Clinton to hear Yosif Feigelson in a solo cello recital. His hour-long musings streamed attractively in a small room housing Jacques’ Menagerie wall—lined with fabulous prints. That underground space nearly filled up Saturday afternoon for the Latvian-born cellist. Attendees broke out in spontaneous applause midway through the recital and midway through Gaspar Cassado’s Suite in D minor. Feigelson smiled and gently advised us of there being one more movement to follow.

A gentle afternoon overall with Bach, Prokofiev, and Weinberg, Interestingly, Spanish excursions heated up the afternoon by way of Cassado, Albeniz, and a Flamenco encore. Bach’s Sarabande and Gigue in G major opened the recital. A sweet airiness from Feigelson played to the room. Multiple stops and solo lines intermingled, setting up a continuous sequence of elements. In the Gigue, his careful Bach continuum, now taking on greater variances from imperceptible to extreme, especially pointed to the listener’s cognizance.

Given the recital’s presenter, Ballets Russes Arts Initiative, to find cellist Feigelson performing Prokofiev and Weinberg was no surprise—BRA fosters international creative exchange with a special focus on the post-Soviet States. Thinking in that light, entries from the two Russians were particularly rewarding. Feigelson spoke about Prokofiev’s last work, Andante from Unfinished Sonata op. 143 intended as a birthday present to Rostropovich. “75% of the music” is that of the Russian icon and the rest by a student of Rostropovich. There was much for the mind to tackle in this tempo-shifting solo piece. Enough tonal orientation from the composer proved vital in following along. Full-bodied low-string and clear-throated treble expression continued Feigelson’s generous warmness. Some insight into the feel of this music occurred particularly in ruminating passages. Feigelson would explain later that the composer’s awareness of his last moments on earth would leave its footprint on the Andante. 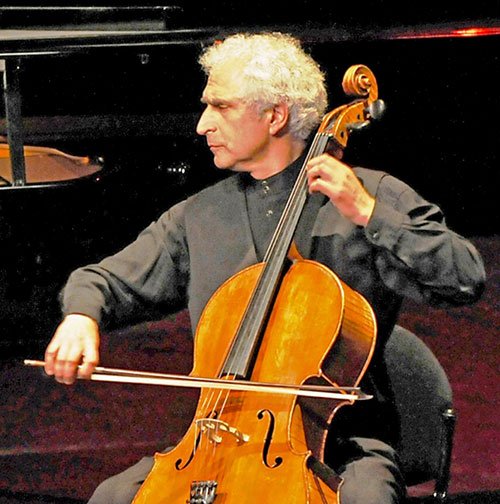 Yosif Feigelson has enjoyed a solo career spanning four decades. A student of Mstislav Rostropovich, he was a winner of both the Tchaikovsky and Bach international competitions, and has performed around the world. A champion of Mieczyslaw Weinberg (1919-1996), Feigelson gave the world premiere of the composer’s 24 Preludes. Five preludes from Weinberg’s opus 100 would be an introduction to probably virtually all of us at the museum. Feigelson wondered why more of the world has yet to encounter the works of this hugely prolific composer.

In the first prelude, a plaintive voice climbing higher and higher puzzled in substance, while the rendering did not, there was clarity and an obvious loving touch from the cellist. Next, came a dance featuring pizzicato glowing with a pointed matter-of-factness. Virtuosic harmonic display in the third prelude kept attention on the cellist. The fourth prelude had the most to say, saying it in contrapuntal ways, a chance for Feigelson to show musical smartness. For the fifth, more pizzicato alternated with bold bow strokes from the cello in a high energy dance.

Feigelson adapted Isaac Albéniz’s Asturias for solo cello. The well-known six-minute piece, originally written for piano and having seen numerous adaptations, could be placed near the top of the many versions. Electric bowing and vocalization found the right spot for a pleasant summer afternoon outing.

David Patterson, Professor of Music and former Chairman of the Performing Arts Department at UMass Boston, was recipient of a Fulbright Scholar Award and the Chancellor’s Distinction in Teaching Award. He studied with Nadia Boulanger and Olivier Messiaen in Paris and holds a PhD from Harvard University. He is the author of
20 Little Piano Pieces from Around the World (G. Schirmer). www.notescape.net

Comments Off on Spotlight on Feigelson’s Cello