“Versailles: Portrait of a Royal Domain,” this year’s Boston Early Music Festival chamber opera evening (my 2016 review of same is  HERE ), brought us a sampling of the entertainments Louis XIV offered his courtiers and privileged visitors in the public appartements of the chateau. The program of works by Charpentier, Lully, and Lalande, staged at Jordan Hall on Saturday, repeats at the Mahaiwe Performing Arts Center in Great Barrington on June 21st and 22nd, and at the Venetian Theater in Katonah, New York, on June 23rd.

When the French court left Paris in 1682 to take up permanent residence in the palace of Versailles, Louis XIV knew that he needed to keep his courtiers sufficiently amused so that they would not regret their “exile” from the pleasures of the city. Entertainments known as the Soirées d’Appartements took place three times a week during the winter season in the newly decorated Grand Apartments. Music, dancing, a variety of games, and a lavish buffet were on offer in a relatively informal setting in which guests, rather than being served at tables, were free to choose their own food, games, seating, and conversational companions. The painted ceiling of the new hall of mirrors depicted the Sun King not as a mythological figure but rather as a real life human being — a contemporary monarch.with a documented history of heroic deeds. Stage director Gilbert Blin’s article in the Festival program book explains the intersecting relationships of the three composers to each other and to Louis XIV and the Versailles festivities. As the king’s official composer, Jean-Baptiste Lully (1632-87) retained a monopoly on all French opera performances. Lully’s opera Atys (1676) was the king’s favorite, and excerpts from the opera were frequently performed at his salons. Without competing directly with Lully, Marc-Antoine Charpentier (1643-1704), probably wanted to demonstrate to the king his abilities in the area of French secular music as well as in the Latin sacred music for which he was best known. While Charpentier had connections to the powerful Guise family as well as to the Dauphin, the king’s eldest son, Michel-Richard de Lalande was supported by the king’s former mistress, the Marquise de Montespan, and taught harpsichord to her daughters.

Blin makes a carefully documented case for the authorship of the anonymous libretto of Charpentier’s Les Plaisirs de Versailles. While there is no record of a performance, and Charpentier’s scores never mention the authors of their texts, the title page of the manuscript score of Les Plaisirs clearly announces the piece’s subject matter and objective: it was most likely written for Versailles with the intent of itself becoming one of its “Pleasures.” The opening page announces that “La scène est dans les app.” (The scene is in the Apartments). Les Plaisirs was intended to be performed in front of the king: the last line given to La Musique refers to Louis as the beneficiary of the plot’s intent (to make him laugh); the final chorus addresses the king directly as spectator. The story itself describes the entertainment: La Musique seems to improvise but actually manipulates the other characters; La Musique and La Conversation compete for first rank; Comus, the god of festivities, intervenes by offering the distraction of food and drink; unsuccessful, he calls on Le Jeu to bring in games of all sorts. This combination of pleasures represents a new kind of court entertainment often called “Les Appartements” after the venue in which it took place. In fact, the December 1682 issue of the monthly magazine Le Mercure Galant, published by Jean Donneau de Visé (1638-1710), a fashionable writer and journalist, in collaboration with Thomas Corneille (1625-1710), younger brother of the playwright Pierre Corneille (1606-84), describes an entertainment very similar to Charpentier’s. The three had collaborated beginning in 1675, and Charpentier wrote incidental music for many of Donneau de Visé’s plays. Blin’s hypothesis that Donneau de Visé wrote the libretto for Les Plaisirs de Versailles seems highly plausible.

The libretto by Antoine Morel for the Les Fontaines de Versailles. by Michel-Richard de Lalande states that the concert was “given to his Majesty in the grand apartments of his chateau at Versailles on the 5th of April, 1683” (“donné à sa Majesté dans les grands appartements de son Château de Versailles, le 5 avril 1683”). The scenario imagines that the Deities whose sculptures adorn the fountains of the famous gardens are meeting in the palace, preparing to celebrate the king’s return to Versailles in the spring. In his younger days, Louis liked to conduct tours of the gardens on foot while describing to his visitors the allegorical meanings of the fountains and their statues. When walking became difficult, he used a wheelchair or “roulette.” As Blin points out, from 1661 until his death in 1715 the king personally oversaw the design and ongoing expansion of the gardens and their fountains; the elaborate waterworks represented the ultimate triumph of art over nature. Morel’s text praises Louis as creator of the gardens, but represents a dream rather than an actual promenade, imagining “a symposium of the gods personified by the statues that were the ornament of the waters of Versailles.”

The shallow stage at Jordan Hall made a tight fit for the BEMF chamber ensemble of 11 players and 12 singers, most of whom were also called upon to dance. As the Overture to Les Plaisirs de Versailles concluded, the curtain opened on the royal apartments. The decor consisted of four large golden urns standing on malachite- and lapis lazuli-encrusted pedestals. On either side stood a table of elaborately presented food. The large continuo ensemble, led by Paul O”Dette and Stephen Stubbs, theorbos, and Michael Sponseller, harpsichord, was grouped on the right; Robert Mealy, concertmaster, led the strings and winds on the left. As Louis, dancer and choreographer Carlos Fittante arrived in an invalid chair, and remained there throughout the divertissement.  In the opening scene, La Musique, satirizing the classical prologue of the muses, praised Divine Harmony as the monarch’s favorite pastime. The second scene focused on the rivalry between La Musique and La Conversation, Wakim’s ethereal high soprano competing imperiously with the constant interruptions of Marjorie Maltais’s virtuosic mezzo parlando in rapid triple time. Music called for silence so she could deliver her song to Love and charm the king, only to be ridiculed by Conversation. Music danced a minuet, which Conversation mistook for a courante, thus displaying her ignorance. In the third scene, one of the Pleasures, tenor Aaron Sheehan tried to calm the dispute as Comus (baritone Jesse Blumberg) offered hot chocolate to the two ladies. Music was not above pilfering a few grapes from the buffet, hastily stuffing them into her décolletage. The fourth scene was led off by tenor Jason McStoots in comic guise as Lord of the Games (Le Jeu); Conversation made fun of Music’s ut, re, mi, fa, sol, la, Louis was moved to laugh, and all praised his victory over the three-headed hydra, the triple alliance of Holland, England, and Sweden.

Act IV, scene 5, from Lully’s Atys depicts the river gods and the nymphs of the fountains celebrating the upcoming marriage of the daughter of Sangar, the god of the river, to the son of Neptune. Olivier Laquerre’s rich baritone and elegant delivery were ideally suited to the part of Sangar, and the trio of divinities — soprano Molly Netter, mezzo Virginia Warnken, and tenor Zachary Wilder, made an exquisite ensemble. All joined in dancing a joyous gavotte and two minuets. The sleep scene from Act III followed without pause. Here again Louis was wheeled in to sleep and dream in his chair. Tenor Aaron Sheehan, as Sleep, delivered a mellifluous praise of repose with exquisite tone quality and subtlety of dynamics and phrasing over a repeated bass pattern. As oboists Gonzalo Ruiz and Kathryn Montoya switched to recorders , Jason McStoots’s sweet high notes embodied the character of Morpheus, god of dreams, to perfection. Even bass-baritone John Taylor Ward’s sonorous Phobetor, god of nightmares, yielded in the end to the gentle silence of sleep, tenor Zachary Wilder joining the trio for the final couplet of this magical scene. 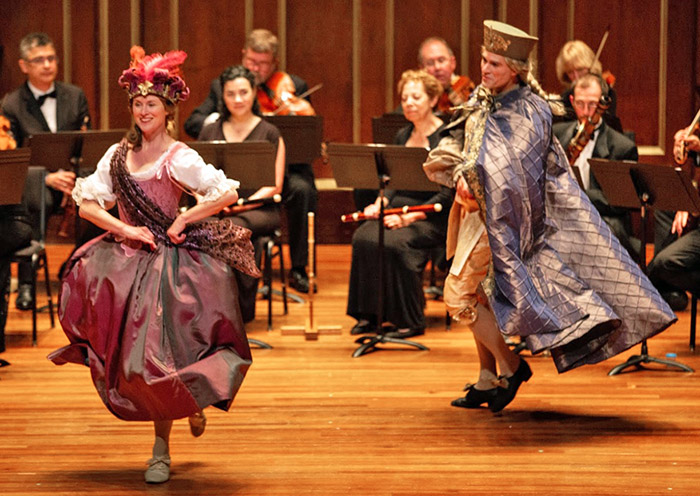 During the Overture of Lalande’s Fontaines de Versailles, pale draperies transformed the golden urns into the garden’s fountains, behind which the various allegorical statues took their places. From his wheelchair, Louis dreamt of walks in the gardens. Flora, the goddess of spring (soprano Molly Netter), and Latona, the mother of Apollo (mezzo Virginia Warnken), sang a perfectly-attuned duet celebrating the return of the Sun (Louis was called the Sun King) and of spring. Apollo (Aaron Sheehan) joined them, eloquently praising Louis as the divine truth of which he is only the image. Ceres, the Roman goddess of agriculture, sung by Sophie Michaux, a mezzo of astonishing range and flexibility, reported that the return of the Sun has caused flowers and grain to grow. Flora called on the zephyrs to fly to her fountains. In a bravura show of strength, bass-baritone John Taylor Ward as Enceladus, the giant of Mount Aetna in Greek mythology, promised henceforth to renounce earthquakes and volcanic eruptions and instead to entertain the king with fountains. Finally, Louis (Carlos Fittante) got up to dance, To a brilliant chaconne, with instrumental variations by oboes and bassoons, he expertly wielded a sword and slew the hydra monster. Bacchus, Fame, Enceladus, and all the gods and goddesses renounced all sadness and joined in praise of their hero, “the sovereign Master of the earth and the waters, who has turned darkest night into brightest day.

Given the space restrictions at Jordan Hall, one wondered whether all the soloists and members of the choir needed to be on stage at one time. Perhaps some could have waited in the wings, or sung from the balcony. As it was, there seemed to be just too much going on for the staging of Les Fontaines to be truly effective. BEMF’s wonderful singers and players deserved a setting with less confusion and more space in which to move about.

Comments Off on Visiting the Sun King’s Appartements