Offenbach’s two operettas making use of ancient myth and legend, Beautiful Helen and Orpheus in the Underworld, two of his most popular shows, both filled with tunes that are still familiar to modern audiences, largely because they were extensively used in a 20th-century ballet score, Gaîté Parisienne, assembled by Manuel Rosenthal for Leonid Massine in 1938. The librettists of Helen, Henri Meilhac and Ludovic Halévy, produced texts for Offenbach for nearly 20 years (while also writing libretti for Bizet’s Carmen and Massenet’s Manon), and created delightfully absurd situations again and again.

But the “Greek” librettos had a sharp edge; it was not simply a playful treatment of a familiar mythological story. The German musicologist Michael Stegemann, writing for the German Deutschlandfunk Kultur (German Radio Culture) this weekend noted: “The gaze swept across the distance, but the goal lay nearby. When Jacques Offenbach set an operetta in ancient Greece, modern Paris was intended. His contemporaries played along with this game all too cheerfully—and whoever found himself represented in it could be proud of the fact.”

Indeed, the operetta that Odyssey Opera produced this weekend was considered from the outset as a satire, mutatis mutandis, of the Paris of Napoleon III. To that end, director Frank Kelley, set designer Janie Howland, and costume designer Brooke Stanton have produced a twofold production that takes place in the 1860s at a French seaside resort of Napoleon III and in Greece shortly before the start of the Trojan War. (They are ably abetted by Karen Perlow’s lighting and Rachel Shufelt’s hair and makeup designs.)

It might seem counterproductive to put the cast sometimes in elegant 19th costume and sometimes in something more or less Greek—all the more so when they appear in the same act. But the flow of designs—from modern to ancient (beginning in Act I and returning from ancient to modern in Act III, with the middle act entirely in “Greek” dress—actually works very well and provides both variety and color, and allows references to French culture in the late 19th century to make their humorous effects.

A modern audience, seeing the show 155 years after its original production, may be unfamiliar with the details of both ancient Greek and 19th-century French references. Fortunately, Laura Stanfield Prichard’s excellent program note points some of these elements: The fact that word games were very popular at Napoleon’s court (and are parodied in Act I), and that references to French paintings at the time of composition will help prepare audiences for several surprises—including Paris’s description to the priest Calchas of the three goddesses who asked him to select the most beautiful and award a golden apple to his choice; he chose Venus, who promised him the most beautiful woman in the world for choosing her. This Helen, unfortunately, is already married to Menelaus.

As Paris sings the three verses of his song describing the competition, reproductions of three famous paintings, supposedly images of the three goddesses, Juno, Minerva, and Venus, are flown in over his head.

In Act III, the best and most surprising artistic reference was a tableau vivant of Manet’s famous (and scandalous) Déjeuner sur l’herbe, scandalous at the time because Manet’s painting (with two elegant Frenchmen sharing a collation outdoors with a naked woman), got the paining rejected from the Salon jury in 1863—immediately before Offenbach composed Helen. Another painter referenced throughout is Edouard Degas for his many representation of ballerinas. In the last act, behind the Manet reference, a ballerina leans over to tie her shoe, adopting one of Degas’s best-known poses for a dancer—simultaneously taking the place of a distant bather in Manet’s painting!

Having been alerted to the presence of these tableaux, I strongly suspected that some of the other images and personages onstage were also references to paintings that I couldn’t quite put my finger on.

Roller skates might seem out of place in Helen’s boudoir (Act II), but a couple of the ladies in the chorus wear them to represent a current fad, and the hot air balloon that takes Paris and Helen away to Troy at the end is another fad of the time.

In the “Greek” elements of the story, there are more lively witticisms. Among the Kings of Greece famous from the Iliad, we meet Agamemnon and his young son Orestes (a “pants part,” played by a woman), Achilles (with a bronze protector on his left heel, to which the others make frequent reference, always to his annoyance). There are two kings named Ajax; here they are a very droll pair, one tall and one short, like a Greek Mutt and Jeff, who throughout the operetta share a single tunic, as if they are Siamese twins.

Of course, the essence of the operetta is Offenbach’s bubbly score. There are patter elements both for soloists and chorus, as well as several lilting walzes (the one to which Paris woos Helen is especially seductive). As has been the case with earlier operetta productions by Odyssey Opera, we found the musical side of La belle Hélène in good hands. Music director Gil Rose has the measure of this score, both in its laughter and its occasional lyric poignancy. The orchestra, almost identical in size and makeup to that used by Arthur Sullivan in England, played crisply and brightly.

Among the singers, Helen reigned supreme, not only as the most important character, but also in the superb representation by mezzo Ginger Costa-Jackson, making her debut with the company. She has voice, the technique, the acting ability, and (it is essential in this role), the looks to be a captivating Helen. She could range from serious upset that “Fate” (thunderclap in the distance) has marked her out for this complicated situation, though the fact remains that she doesn’t especially love her husband, and Paris, the shepherd about whom she has heard, is quite entrancing. Her part includes from the loving waltz with Paris late in Act II as well as a lively “Apple” cadenza in Act I that comes across as a parody of many an operatic mad scene—only far funnier.

Tenor Adam Fisher could hardly be bettered as Paris, the simple shepherd whom fate has treated with such an extraordinary luck—if only he can find, seduce, and abduct the woman he has been promised by Venus. He is youthful and hunky, effectively seductive in the boudoir scene with Helen. He seemed not quite warmed up at the beginning on Friday night, but came fully into his own when it counted.

Bass Ben Wager, the high priest Calchas, fills out divine orders, but always seems ready to be a little corrupt to smooth things along. He took a droll approach both in his singing and his acting.

In some respects the part of Menelaus is an ungrateful one, not simply because his wife is eager to get away from him, but because he has less to sing than the aforementioned singers, and his part truly becomes grateful only late in the second act—but there Alan Schneider turned it on and expressed his frustration with his wife—especially after a returns unexpectedly from a journey and finds her in bed with Paris.

The various kings of Greece were all represented in quite different personalities, and the singers who undertook them made effective differentiation. David McFerrin took the role of the stalwart “king of kings” who would shortly be called upon to lead an army of Greeks to Troy. His young son Orestes, played by soprano Jaime Korkos, is a rowdy teenager in his character, and acts up at many inappropriate moments. (There is a brief foreshadowing of the future tragic roles of father and son at the end of the Trojan War, but here they pass as comic references.) Christian Figueroa has a manly physique and voice, but they are turned here to comic service as the narcissistic Achilles who can be humiliated by references to his problematic heel. The twin Ajaxes are delightfully funny, trapped as they are in their “onesie” tunic despite the difference in height that makes them automatically a comic duo. All of the kings have a verse in a funny song of introduction when they arrive in Act I for the game of wits and get drawn into the strange goings-on regarding Helen.

Mara Bonde elegantly fills a small role as Bacchis, a lady-in-waiting to Helen. Two women who arrive as playmates of Orestes—Felicia Gavalanes Loena and Rachele Schmiege as Parthoenis—are amusingly outgoing with their generosity to most of the men in the cast at one time or another.

The chorus, well trained by Mariah Wilson, assistant conductor and chorus master, sounded crisp and effective. Choreographer Marjorie Folkman created the elegant dances for the entire company as well as those for Helen and Paris.

The playfulness of Offenbach’s work is always a joy to experience, and on this occasion, we heard “a new English translation by Richard Duployen.” We wondered, how new, though, since Richard Duployen currently performs in the English theater, I assume that the translation debuted over the water.

I always anticipate one delightful joke from a French recording that I have lived with for a half century. During the word game in Act I, the orchestra plays a funny little out-of-tune fanfare at the end of each round. After the first occasion, Agamemnon turns to Menelaus and says, “Lovely music. Yours, Menelaus?” And he replies, “No. German. I ordered it for this occasion.” The line is clearly meant to refer to Wagner’s Tannhäuser, which had been produced in the “Paris version” in 1861, a devastating failure. By the time the German-born Offenbach reached his adulthood, he was, heart and soul, a Frenchman. I missed this little dig at the most well-known German composer of the day. 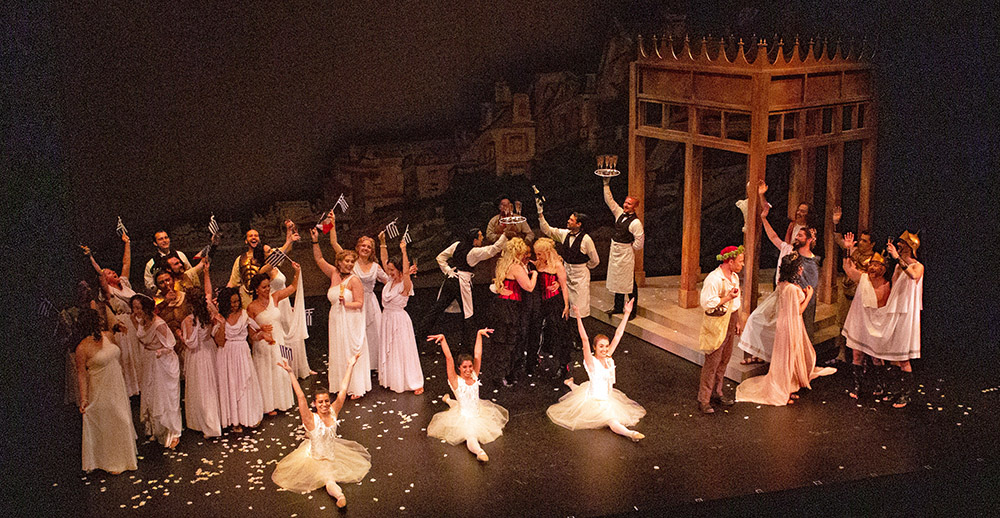 When I could hear it, the new English translation worked very well, but there were more places than I would have liked, including most of the big choral numbers, where I simply could not make out the words. This worried me, because the words came across well with Gilbert and Sullivan’s Patience in the same theater two years ago. Wondering whether my location caused this effect, at the first intermission, I asked several musician and reviewer if they were having the same problem, and they all agreed. I find it hard to explain, because the choral singing seemed very crisp and together. Offenbach can often be challenging to sing because sometimes the words pass incredibly fast (even more so than in a G&S patter song); in this operetta that occurs, for example, in the lively passage in which the kings of Greece introduce themselves individually. And sometimes Offenbach breaks up the words into individual syllables and plays with those. Singing them in translation could introduce even more difficulties.

Still, the brio and lively charm of Offenbach’s music always wins one over, and this production provided joy from beginning to end.