Following upon a triumphant Boston début at the Isabella Stewart Gardner Museum in February [reviewed HERE], the 12-piece string ensemble ACRONYM returned to even more resounding success at its Boston Early Music Festival début Wednesday in Emmanuel Church. While in February the ensemble introduced a single never-recorded opera, this program drew across its prolific discography (nine releases in seven years since it began in 2012), spanning works by Antonio Bertali, Heinrich Ignaz Franz von Biber, Samuel Capricornus, Giovanni Valentini, and other eccentric gems from the mid-late 17th century.

ACRONYM spells out its name differently for each project. Some samples of its “backronym” inventions include “Anachronistic Cooperative Realizing Obscure Nuanced Yesteryear’s Masterpieces” and “American-Australian-Alemannian Coalition for the Recollection of Opulent Nifty Yummy Madrigals!,” fully demonstrating that it is simply A Conveniently Recursive Overarching (and somewhat Ostentatious) Nomenclature for Yarn-spinning Musicians.

In this instance those same yarn-spinners plied their literary imagination to program notes that, in the first-person narrative of a wounded trumpet-playing musketeer of the Holy Roman Empire, wove the musical selection into a feverish stream-of-consciousness pastiche that bore the flavor of an artisanal cocktail with homemade bitters that a flamboyantly mustachioed Brooklynite in waistcoat over flannel shirt and skinny jeans pours into a mason jar with studied nonchalance. (I tease in groaning fondness. Far be it from me as a certified history, historical fiction, and historical performance nerd to pick away at this thematic glue. Yet I can’t get over the nagging question: wouldn’t a military trumpeter’s dying hallucinations include his own instrument at some point?)

As precious as the concert’s conceptualization may seem, the music propelled forth with all the unadulterated joy and funk of a dust cloud erupting through a shaft of sunlight as squealing children leap into piles of freshly threshed hay.

ACRONYM specializes in the obscure and offbeat. Much of its catalogue contains repertoire I had not heard before bingeing through the entire set. Yet far from perpetrating any fussy or anemic academic exercise in historical authenticity, the players revivify with throbbing, red-blooded immediacy, a spirit of spontaneous adventure, as if inventing anew on the spot. This sparkles through its recordings and utterly captivates in live performance.

A veritable All-Star team of the younger talent rising through leading period ensembles, including Apollo’s Fire, Tafelmusik, and Trinity Wall Street, as well as our own Boston Early Music Festival and Handel and Haydn Society orchestras, ACRONYM’s members toss off lead parts from one to another with seamless ease. This is a group of friends and peers who clearly enjoy egging each other on to greater heights of excellence, each as good at sashaying into the spotlight as supporting others in it, all in good fun and flair, with feisty pastoral warmth, a painterly palette of colorations, and impish humor.

Chuckles and low gasps rippled out in gentle waves through the audience at various inventive or especially incandescent turns. 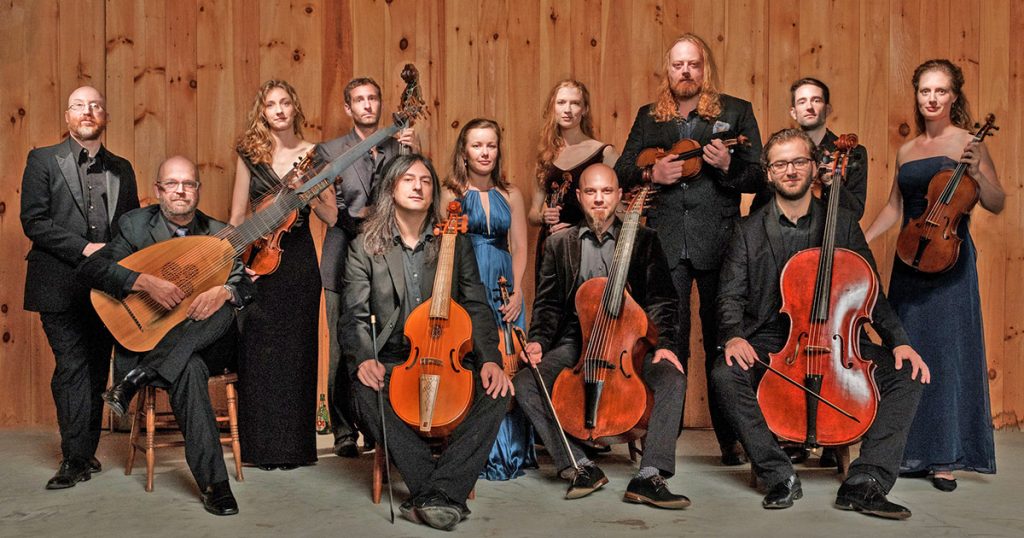 Biber’s Battalia crowned the jewel-studded hour with its mad mélange of rousing percussive thrust, melting fever-dream chromaticism, pensive, prayerful devotion, and a tender, soft-smiling, westering-sun wistfulness. At one point, Doug Balliett inserted a sheet of paper between the strings of his double bass so each bow strike evoked the weary rasp of a battle-slackened drum. Pizzicati snapped across the ensemble with Bartókian bursts of pizzazz. With all the curious toys and tools of its cabinet in full display, ACRONYM’s artistry in this perfect showcase closer drew rapturous applause and cheers.

Had I one nit to pick, I would have liked more spotlight on Elliot Figg’s harpsichord-playing, which had left me in breathless wonderment when I heard him with Ruckus in December and with ACRONYM in February.

Next time, soon, I hope.

Comments Off on ACRONYM Enchants Again