As a preface to this review, please consider: 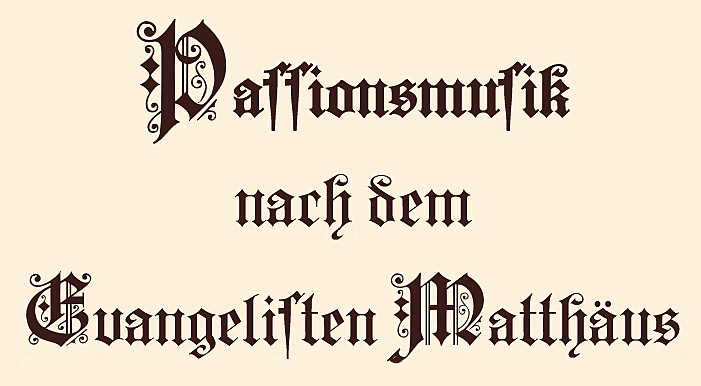 1) Bach’s Matthäus-Passion is always a marathon. Make it one voice per part so there is never anywhere to hide in the chorus, then dole out all the solos to those same choristers — as did Dunedin Consort per its customary style in Jordan Hall Monday night as part of the Boston Early Music Festival — and you have a triathlon in which mere completion without utter collapse must count as a triumph.

2) In my personal universe, the Matthäus-Passion reigns as the single greatest human creation, and this I aver as one who grew up intimately familiar with non-European canons of greatness. Since the haunting strains of “Erbarme dich” reached out from a staticky public-library VHS of Tarkovsky’s Sacrifice to clutch my teenage-runaway-dropout soul, this master of masterpieces has always played a profound role in my life. So, talk about unreasonable standards… .

3) After less than a full season of immersion into Boston’s musical trove, the likes of the Handel and Haydn Society, Blue Heron, and BEMF’s various presentations and productions have already spoiled my appetite for anything less than immaculate. BEMF’s own season finale this spring, a spare, un-staged chamber rendition of Handel’s Apollo e Dafne, still holds my vote for the most spellbinding and utterly transcendent performance on the opera-oratorio continuum in the area this year (Boston Lyric Opera’s Rape of Lucretia takes a close second). So, again, demanding standards.

All of which is to say, Dunedin Consort achieved an imperfect but impressive feat, in which I found more historical interest than musical rapture.

Celebrity fortepianist Kristian Bezuidenhout led from the harpsichord Dunedin’s two 11-piece orchestras, organ, and two vocal quartets, plus an additional quartet of Boston University Marsh Chapel Choir sopranos for the ripieno parts in the first and last movements of Part One.

In the liner notes to its 2008 CD of the Matthäus-Passion (which shares with this outing only five instrumentalists and a single singer), Dunedin’s longtime music director John Butt expounded on the historical and musical merits of assigning one singer to each part, with no additional soloists. Indeed, debates over “authenticity” aside, this method highlights the dialogue, not only between biblical characters in the recitatives, but also between the two choruses and orchestras.

At its best, such an approach can bare a visceral nakedness of the human voice and imbue a live theatricality well worth experiencing at least once. As this evening progressed, however, audible fatigue settled in. By the time we reached the Heartbreak Hill of “Ach, Golgatha,” I genuinely worried for the singers’ wellbeing and feared their stumbling descent to the finish line. To great relief, they rallied just in time for a resounding final sprint from mid-way through “Mache dich, mein Herze, rein” to the end.

Outstanding among all eight champions of heroic endurance: Matthew Brook brought the world-weary ember warmth and occasional gravelly gravity of a Verdian father role to Jesus’s utterances and bass solos including “Komm, süßes Kreuz” and “Mache dich, mein Herze, rein.” Tenor Hugo Hymas rang a lyrical, honey-toned Evangelist throughout — even in “O Schmerz,” where one might prefer a bit more fire and brimstone — barely suffering any wilt to his spring-meadow freshness. Jess Dandy’s plum-luscious “Erbarme dich” contained a cosmic vastness where distant stars pulse red and fade, presenting an Exhibit A for the irreplaceable value of good altos who own their womanly curves in an early-music world prone to favor if not fetishize countertenors.

Uneven articulation often plagued the choruses, with soft consonants especially susceptible to melting away in the chorales, and broad and flat vowels dilating further as the night wore on. Perhaps a nod to the Saxon dialect of Leipzig?

Both choruses and orchestras shuffled through some shaggy attacks and cut-offs. Bezuidenhout maintained a brisk pace, but the faster fugues in particular require stronger tentpoling structure to prevent wrinkles and sags. Crisp consonants could have helped tighten the strings, too. I heartily support conductorless ensemble work and generally favor Bezuidenhout’s style of soft-touch guidance above hyper-emotive podium choreography or metronomic marking of every beat, but I wonder if the sheer complexity of the Matthäus-Passion requires a firmer hand.

As perhaps to be expected, orchestra volume often overshadowed the singers — not overwhelmingly, but enough to draw attention and prompt one’s gratitude time and again for the diamantine precision and brilliance, as well as the seemingly infinite sensitivity and dynamism of the H+H orchestra, which will also be presenting a Matthäus-Passion in its 2019-20 season.

Our guests played an honorable game, and I was glad to have experienced what may (or may not!) have been a more historically accurate representation of the Matthäus-Passion in Bach’s time. But, O, how I look forward to cheering the home team next April.