Commonwealth Lyric Theater’s artistic and stage director Alexander Prokhorov has taken inspiration from Peter Brook’s La Tragédie de Carmen, which in 1983, condensed the opera to its most dramatic, action-filled moments. Prokhorov’s version, while preserving all great hits, like the lively and quintessentially Bizet quintet and the fun-filled children’s chorus (performed by the Lucky Ten Young Talent Studio), comes in at about two hours. 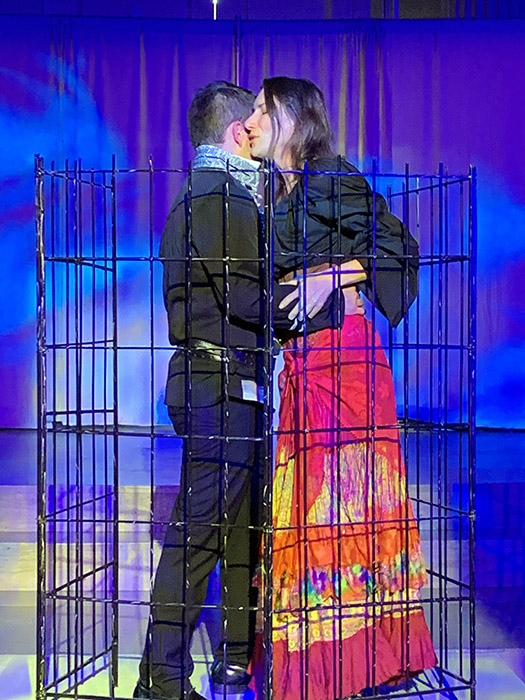 The opera forms part of Newton Arts Festival at the beautiful Hall at Newton City Hall, where the focus of the set design is on Michael McTeague lighting. The accompanying ensemble of string quartet with flute, clarinet, percussion and piano should sound pleasingly full in the lively space.

From Prosper Mérimée’s source novel, we learn that the young Carmen’s forced marriage to an older gypsy accounts for her unpredictable behavior towards the men she meets.

Don José, as dual cast with Italian tenor, Giovanni Formisano (May 17 and 19) and by a Spanish tenor, Germán Gholami (May 18), is a young man, who has only known the innocent, platonic love he shared with his childhood friend and betrothed, Micaëla.  But the attentions of the titular gypsy girl, of course,  transform him from an obedient and gentle young man into a murderer.

CLT’s character development takes liberties in changing the course of events. Thus, for example, Escamillo, performed by the Metropolitan Opera renowned artist Franco Pomponi (May 17 and 19) is mortally wounded by the bull at the end. There are a few other plot twists, but spoilers will not be forthcoming.

One can expect dancing on the table, and two solos with castagnettes by Sabrina Avilés who has been performing flamenco and Spanish classical dance for over 25 years.

As is already CLT’s tradition, the costumes are created especially for the show, designed and sewn by a group of designers and volunteers, headed by Natalia Stolyarova and Yekaterina Bolotovskaya, evoke the historical period of the 19th-century Seville

Sergey Didenko, Sergey Vertkin and Greg Besher executed the sets are executed in the best of theatrical traditions, creating a sense of the place and time of action.