An unmistakable magic can occur when a gifted married couple makes music together. Saturday at Jordan Hall, we witnessed such a collaboration, with many distinguished NEC faculty in attendance

The Foundation for Chinese Performing Arts has been presenting some extraordinary musicians in first-class concerts for 30 years.  My high expectations were actually exceeded when violinist Soovin Kim and pianist Gloria Chien, both well-known to Boston audiences as soloists and chamber musicians played a thoughtfully conceived program with passion and a passionate attention to detail.

I’ve heard a goodly number of violin-piano duos among the 184 concerts I’ve reviewed here. The violinist always gets top billing, but it’s often the pianist who contributes much of the magic. Kim and Chien have, of course, amazing chops and resumés. Kim deeply impressed me the one time I heard him previously, and Chien provided many pleasures with the Chameleon Arts Ensemble, but as duo partners, they make this reviewer smile almost constantly. So good is their musical and marital collaboration, that it brings me joy. I can think of no higher compliment.

The duo’s refreshing concert included no warhorses, just obviously music they really enjoyed. Kim explained that most of what we would hear had been written between 1914-1924, when an “explosion” of non-Germanic violin and piano pieces appeared. 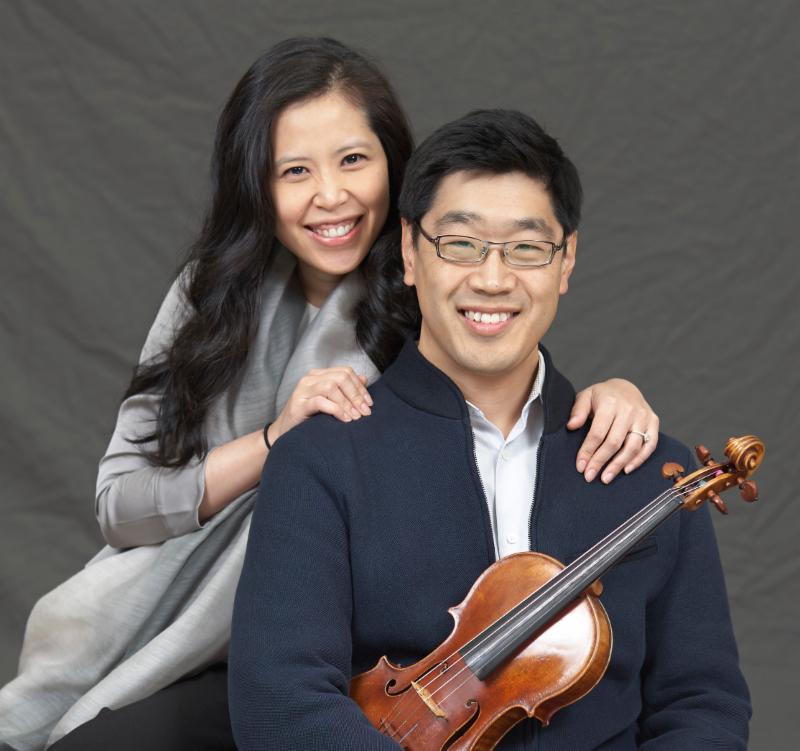 Ravel’s Violin Sonata No. 2 made an intriguing opener. Ravel himself played the piano part of the sonata’s first performance, with violinist Georges Enesco, who, like Ravel, was a former composition student of Fauré. The sonata had an unusual four-year gestation during which time he completed his opera L’Enfant et les sortilèges and wrote his violin show-stopper, Tzigane. Rumors have circulated over the years that during the American premiere, Joseph Szigeti’s bow got stuck between two violin strings in the third movement because he was unprepared for Ravel’s unexpectedly faster-than-rehearsal tempi. The piano part in the lyrical first movement oddly reminded me of a delightful shimmering fish underneath a bubbling brook. Ravel wrote wonderfully for piano, and I enjoyed Chien’s work enormously. Ravel penned the famously jazzy second movement before he had his famous encounter with George Gershwin.

Jannie Burdeti excellent notes sum up Webern’s drama-packed Four Pieces for Violin and Piano, Op. 7 pithily. “Anton Webern was a man of few notes. His entire output clocks around 3 hours.” Kim and Chien made the most of every single note, every quicksilver tempo, every luxuriously slow reflection, every dynamic change, and every surprising happening. A thrilling achievement.

Karol Szymanowski’s Nocturne and Tarantella, Op. 28 followed, receiving the virtuosic interpretation it demands. Szymanowski modeled his often-exotic pairing of the two pieces on a 19th-century model of matching atmospheric with bravura. Well done!

The mesmerizing Five Melodies, Op. 35 by Sergei Prokofiev began as a vocalise (without words) for the composer’s then lover, mezzo-soprano Nina Koshetz. The transcriptions include dedications to Koshez as well as to (violinist) Joseph Szigeti. Finally, the duo gave an inspired reading of Richard Strauss’s extremely dense, lyrical, romantic, and intensely virtuosic Violin Sonata in E-flat Major, Op. 18 (1887), yet another representation of a composer in love, in this case with soprano Pauline de Ahna. Strauss’s biographer Norman Del Mar wrote “the piano part resembles nothing so strongly as a Liszt piano concerto, while the violin … suggests a full body of strings.” The second movement invited heartfelt revelations, and allowed the duo to show off its romantic side, as if we were overhearing lovers. Kim emoted with great artistry, and Chien negotiated some beastly difficult piano licks with panache and a rainbow’s worth of colors. Let Cathy Chan, director of the Foundation, bring them back on an annual basis.