Unquestionably deeply felt, the show, according to the New York Times, stands as “one of the most important works of art to emerge from the era of Black Lives Matter.” Bullock, who first performed Baker numbers five years ago, traced parallels between herself and Baker in writing of the genesis of last night’s show:

I was first compared to Josephine Baker when I began my studies of classical music in college and was told that because of the way I looked, I would likely be asked to sing a lot of exotic repertoire. Sparked by complex feelings and questions around identity, I began to study the life, performances, and music of the entertainer, who, at that time, I identified as “the woman who danced in a banana skirt.”

Josephine and I had a few things in common—we were both born and raised in St. Louis, danced a lot as children, and moved to New York to pursue performing. But her path then took a different turn from me: because of discrimination, she emigrated to Paris in 1925, where she became not only the highest-paid female per­former and the highest-paid Black performer, but the highest-paid entertainer the world had ever seen. This all occurred while Jim Crow laws prevailed in the United States….

After performing the source material [for this show] in a relatively raw form, Tyshawn and I retitled the work “Perle Noire: Medi­tations for Joséphine,” because this project was not so much about her, but for her.

Baker once said, “Since I personified the savage on the stage, I tried to be as civilized as possible in daily life.” How exhausting it must have been for her to be preoccupied with how she was perceived onstage and off! Admittedly, I have also been fearful, as a performer and person, about how I would be projected and exposed as a woman of color in the public eye; but when I took on the charge of researching Baker’s history, and then embodying that history onstage for others to witness, that fear began to dissolve.

I have never intended to impersonate Josephine Baker. I am not interested in perpetuating the image of Black popular singers as exoticized, eroticized, and as extraordinary exceptions to most Black people. I do not know how to play into the trappings of a brilliant Black operatic soprano who represents absolute dignity and power, impenetrable in her strength, and ever grateful for opportunities. I do not wish to participate in those characterizations because they do not reflect the complexities of human existence. What I do know is that Josephine laid a path forward for me and I will not perpetuate the tropes or stereotypes of Black American performers.

As I perform “Perle Noire,” I am performing as myself—a more fully incorporated self, who continues to increase her capacity to embrace where she has come from, and aims to share a reality that is direct, clear, immediate, and speaks to you, right now.

We came to enjoy a celebration of the singer, dancer, la Résistance fighter, orphanage housemother, bonne vivante, chatelaine, Légion d’honneur laureate, and exemplar of the vaudeville and Jazz Ages—only to experience the peeling away of the goddess’s mask in rumination on the hurts Baker experienced through exploitation, racism, injustice, and poverty of birth. This theater of righteousness and good intentions deconstructed the standard tunes and spirituals, and even deconstructed Baker herself. Yes, she abhorred racism and injustice, suffering from both, but she packed up all her cares and woes when she appeared onstage. The absolute diva Bullock devoted herself to cares and woes. Her sad and angry meditations contested Baker’s open simplicity and piping insouciance, making of those songs something almost unrecognizable, clothed in contemporary abstractions and learned, after-the-fact musical and textural commentary.

Julia Bullock possesses a lustrous voice and a stage presence that “brings all men and women to her feet,” as she said of Baker. Gorgeous in black velvet, she sang alternately sitting and moving about the stage, ever commanding our attention—resistance was futile. She would turn her back and execute a subtle, melt-inducing shimmy. She would bat her eyes and gesture with her fingers in ways clearly impersonating the divine J, but for the most part Bullock quietly projected dignity with both her singing and her depressing narration—that is, until two-thirds of the way through, when she doffed her long-sleeved jacket and shoes and exploded into a somewhat frontally exposed and extremely energetic mad scene with run-amuck Charleston and jungle exploitation channeling anger more than joie de vivre. Bullock’s savagery scared us. 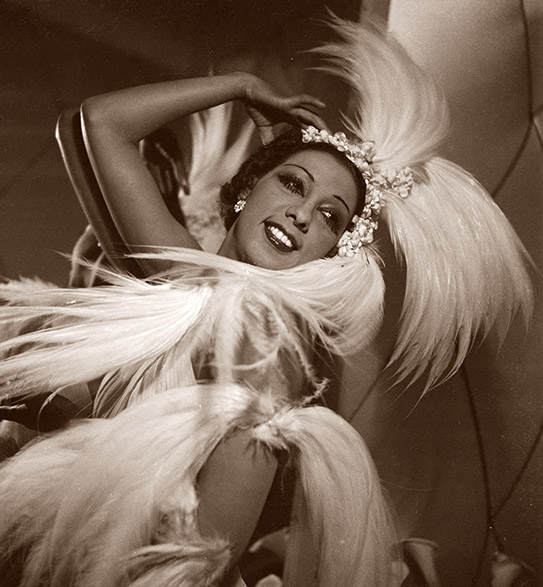 Listen to Baker sing “Bye Bye Blackbird” with infectious delight. Last night’s show opened with that standard in an interpretation which obscured the tune in all the verses save one. Where was the Cambridge HIP movement when we needed it?  In the five songs connected to Baker that followed, the ICE players, Alice Teyssier, flutes; Ryan Muncy, saxophone; Rebekah Heller, bassoon; Daniel Lippel, guitar, and Jennifer Curtis, violin, all gave voice to Tyshawn Sorey’s obfuscating, nervous, eerie, contemplative, contemporary fragmentations, though warm chorales sometimes served as as credal benedictions. Heller’s bassoon launched the most blissful flights. Lumbering between piano and drum kit, Sorey called the changes with authority. His final drum slam produced the blackout which closed the show on the spiritual “My Father, How Long Will Our People Suffer Here?”

Ultimately, questions arose: Could Bullock et alia have meditated on Baker, this most vivid and vital creature of the 20th century, without denuding her songs of their essential, original charms? Could they have more artfully contrasted Baker’s joyful delivery with her inner demons? Could this have been less of a dour reparation and more of a celebration? Does viewing Baker through a modern glass darkly do her full justice?

Luckily Josephine Baker, who kept reinventing herself brilliantly during her 50 years onstage,  lived to witness that “The Times, They are a-Changin’.”

Comments Off on Joséphine Baker Through a Glass Darkly