Looking back on his youthful naivete, an aging narrator recounts his initiation into the subtle arts of love. Fickle Fortune assails him, sowing seeds of doubt and despair. Hope comes to the rescue, remaining by his side to instruct him as he pursues his courtship of an aristocratic woman far above his clerkly station. In a thoroughly engaging multimedia presentation, Boston’s Blue Heron, directed by Scott Metcalfe, in collaboration with Cleveland’s Les Délices, directed by Debra Nagy, brought this unlikely tale vividly to life. The performance of Machaut’s Remede de Fortune (A Remedy for Fortune) took place at the First Church in Cambridge, Congregational, on Friday evening, April 26th, with a repeat performance on Saturday evening.

The 14th-century cleric, poet and composer Guillaume de Machaut (ca. 1300-1377), was uniquely qualified to explore the vicissitudes of unrequited love in high-flown language. Trained in singing, musical composition, and Latin and French rhetoric, he served Jean de Luxembourg, king of Bohemia, as court secretary, probably accompanying him on some of his far-flung journeys to eastern Europe, northern Italy, and Avignon. Steeped in the tradition of the French courtly romance, his long narrative poems in rhymed couplets might well have been read aloud as entertainment for the blind king. Machaut also composed motets to Latin and French texts, a polyphonic setting of the complete Mass Ordinary, and numerous lyric poems, many of which he set to music. After the death of Jean de Luxembourg at the battle of Crécy in 1346, Machaut found other royal and aristocratic patrons, including Jean’s daughter, Bonne of Luxembourg, wife of the future Jean II of France and the probable dedicatee of the Remede, and received papal benefices (church sinecures) that provided him with a comfortable income for life. He ended his career as a canon at the cathedral of Reims. Machaut was much admired in his own time, but 19th-century critics considered his poetry decadent and artificial; the notation of his music was not properly understood until the 1920s. In fact, Machaut brought a newly self-conscious and playful irony to familiar poetic tropes, while his music masterfully incorporated the rhythmic, melodic, and harmonic advances of the self-proclaimed ars nova of the early 14th century. Miraculously, at least six copies of his complete works, both text and music, survived the depredations of the 100 Years War and the French Revolution. Five of these, including two with elaborate programs of illustrations for the narrative poems, are held by the Bibliothèq Nationale in Paris, which has digitized them for free public access.

Musicologist designer Shawn Keener projected artfully selected images from two manuscripts onto a large screen provided background for the story. The frontispiece of the earliest manuscript, Fonds français 1586 (manuscript “C”), which has been dated 1350-1356 on art historical grounds, sets the stage: the blindfolded female figure of Fortune wields a crank that turns a small geared wheel, which in turn is enmeshed in the gears of a larger wheel. On top sits a crowned king holding a scepter; on the way up is a figure in ordinary dress, while another has already landed head first on the ground. The single artist responsible for the Remede de Fortune illustrations in manuscript C provided elaborate details of fashionable court dress, with corseted waistlines, trailing sleeves, and pointed shoes for both men and women and charming garden scenes. The later manuscript, Fonds français 1584 (manuscript “A”), from the early 1370s and most likely prepared in Reims under Machaut’s supervision, employed simple pen and ink drawings modeled with gray washes. Embedded in the Remede narrative and included with their notation in all the complete works manuscripts are seven lyric poems, each representing a different poetic and musical form. Blue Heron and Les Délices performed all seven of the Remede lyrics, but replaced most of the lengthy narration with songs and motets by Machaut based on similar textual themes.

The opening miniature of the Remede in manuscript A shows a young man standing before an elderly teacher, emphasizing the didactic nature of the narrative’s prologue on the art of poetry. Blue Heron director Scott Metcalfe stepped out to read the opening lines in ringing Middle French, savoring its rolled R’s and nasal vowels in all their glory. A prose translation followed, read by Jason McStoots. Countertenor Martin Near and Scott Metcalfe on a medieval fiddle set the tone of the narrative with their performance of Machaut’s two-voice ballade “Esperance qui m’asseure” (Hope, who reassures me). Near’s expressive delivery, enhanced by precise adjustment between voice and fiddle of “imperfect” (thirds and sixths) and “perfect” intervals (octaves and fifths), was close to perfection. After enumerating the lady’s virtues, tenor Jason McStoots shifted nimbly from his role as reader to sing the first of the Remede’s lyric insertions, the monophonic lai the lover has composed in her honor. Scott Metcalfe performed the improvised accompaniment on a medieval harp. Consisting of 12 stanzas, each with its own melody, rhyme scheme, and verse structure, the lai was a suitably virtuosic vehicle for a lover’s praise of his lady. McStoots delineated the formal structure of each stanza, a mixture of long and short lines and of alternating “open” (suspended) and “closed” (conclusive) cadences, with convincing and completely natural eloquence. The accompanying illustration from manuscript C shows the lover in court dress seated in a garden against a background of bushy trees. He is writing on a long curlicue scroll, thus demonstrating his role as a literate composer of written music and poetry as well as a performer. A motet for three voices (McStoots, Nail, and tenor Owen Mackintosh) with French text in the two upper parts and a Latin tenor “Obediens usque ad mortem” (Obedient unto death) added an ironic commentary on love’s obedience. The scene then shifts to the Parc de Hesdin, a well-known pleasure garden created in the 13th century and equipped with elaborate water plays. There the lover sits alone and voices a long Complainte against Fortune, sung with dramatic flair by Jason McStoots over the drone accompaniment of a hurdy-gurdy (Charles Weaver). Falling into a trance, the lover awakens to find the figure of Hope sitting before him. Her Chanson roial in praise of Love was sung by Martin Near, with improvised interludes based on ornamented versions of the song melody on harp (Scott Metcalfe) and recorder (Devbra Nagy). After instructing the lover at length, and placing a ring on his finger, Hope leaves him after singing a “baladelle” in praise of Love for him to memorize and take with him. This four-voice song is the first polyphonic setting among the lyric insertions, and the first to incorporate the full range of rhythmic devices, including syncopation, made possible by the latest developments in musical notation. Debra Nagy’s instrumental arrangement of the anonymous virelai, “Or sus, vous dormes trop” (Now get up, you sleep too long), with its 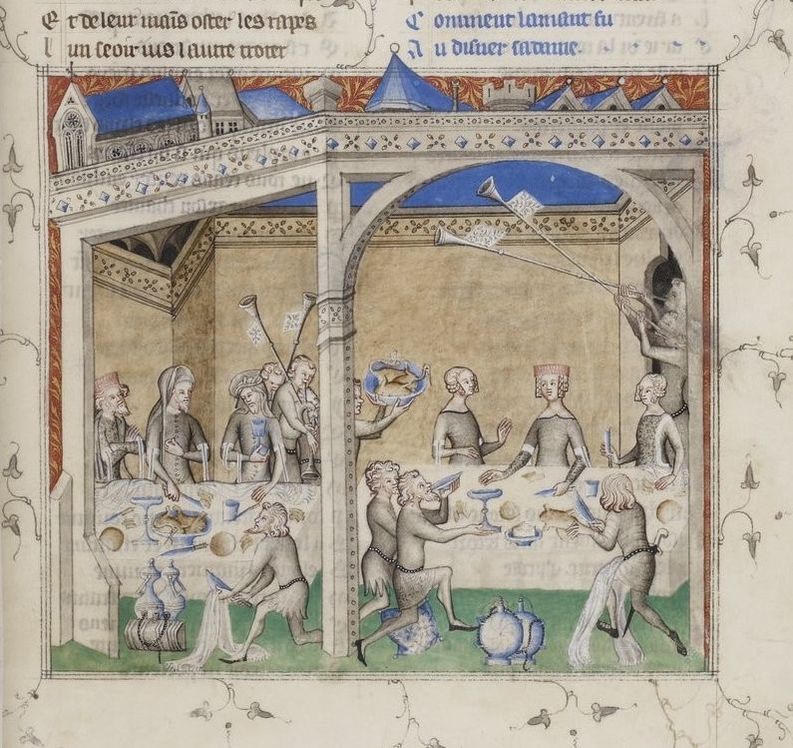 birdcall mimesis, evoked the twittering birds in the garden. The lover’s own ballade, “Dame, de qui toute ma joie vient” (Lady, from whom comes all my joy), its lilting texted part sung with finesse by Owen McIntosh, mirrored his doubt. After leaving the Parc de Hesdin, the lover finds his way to his lady’s castle, where a group of courtiers are dancing outdoors. His lady invites him to join in, and he enters the circle, singing both verses and refrains of a monophonic virelai. McStoots’s impeccable diction highlighted the shifting rhythms of this lighthearted song. Another beautiful illustration from manuscript C depicting the scene was projected, along with a superimposed “flashback” to an image of Hope. The party entered the chapel to hear Mass, evoked by a fine performance of the Kyrie from Machaut’s setting by Near, McIntosh, McStoots, and Charles Weaver. A banquet followed, with a colorful illustration of the feast accompanying the reading of a famously extravagant enumeration of attending instruments. When all have left, the lover and his lady exchange rings and a secular marriage, blessed by the sudden reappearance of Hope, takes place. Taking his leave, the lover delivers a rondelet (rondeau), sung a cappella by Near, McIntosh, and McStoots: even though he departs, his heart will remain with her. Returning, he finds the lady amusing herself with other companions. She begs for secrecy, and he begins to doubt her loyalty. Contradictions between a lady’s outward appearance and actual behavior are expressed in the ballade “Biauté qui toutes autres pere” (Beauty, equal to all others), sung by McStoots and McIntosh with fine attention to the contrast between emphatically declaimed syllabic phrases and extended melismas. The final motet performed by the entire ensemble left a similarly contradictory message: two French texts expressing extravagant praise of a lady over a song tenor doubting a lady’s loyalty but professing loyalty to her just the same.

Inspired by The Consolation of Philosophy of Boethius, widely read in the Middle Ages, Machaut transformed the allegorical figure of Lady Philosophy into a vision of Hope as a defense against the ravages of Fortune, encapsulating his narrative in an exemplary manual of courtly behavior overlaid with self-conscious irony and sly humor. To present the essence of Remede de Fortune in a single evening was a real tour de force. Thanks to.the skill and versatility of Blue Heron’s singers, of the musicians of Les Délices, and to the conceptual framework devised by Scott Metcalfe, Debra Nagy, and Shawn Keener, it worked.

Comments Off on Marvelous Machaut