The Attacca Quartet (attacca meaning moving rapidly from one musical passage to the next) engages in a challenging concert schedule and numerous community outreach programs, educational ventures, as well as playing and teaching about a wide variety of works; in the process, they traverse many states and countries. This Easter Sunday in its first Gardner concert, the Attaca Quartet (Amy Schroeder and Keiko Tokunaga, violins, Nathan Schram, viola; and Andrew Yee, cello) charmed with two understandably esteemed quartets—Haydn’s Op. 77 No. 2 and Beethoven’s Op. 132 (Heiliger Dankgesang) with Caroline Shaw’s Entr’acte and Valencia and cellist Lee’s arrangement of three pieces from Bernstein’s Piano Anniversaries. The ensemble’s verve, sensitivity and excitement electrified Calderwood.

Haydn’s F Major Op. 77. No. 2, Hob III:82, written in 1799, and one of his late quartets, begins its Allegro moderato with tuneful apparent optimism and then turns inward—a vicissitude recurring pretty much throughout the work. Attacca members immediately demonstrated unusual rapport from the first bar of the work through the Finale: Vivace assai. The Minuet: Presto ma non troppo — trio starts in Ländler-like spirit, but quickly reveals a pensive if not sorrowful strain, and oscillates between these moods. The Andante constitutes an offbeat achievement—a morose D major. The affinity among the quartet members facilitated a poignant version. The Finale was fittingly upbeat.

Watching each musician brought additional pleasure throughout the afternoon. Schroeder and Tokunaga, magnificently decked out in blending aqua, emanated pure tones on their instruments; Schram with his more sedate “violal” lines and Lee, who prefers to forego an endpin (though his cello is not baroque) for more freedom, provided major expressivity.

Caroline Shaw, a prolific composer crossing musical genres, wrote Entr’acte in 2011 after hearing a performance of Haydn’s Op. 77, No. 2, and becoming enchanted with its minuet.  The pairing helped the concert’s flow between classic and contemporary.  The work starts, turns and returns, not unlike Haydn’s phrasing, yet with modern modulations and unique pizzicato and surprising segments– there are moments that sound like a country fiddling contest. Shaw is a friend of the Attacca Quartet, and their version of Entr’acte mesmerized.

Shaw’s Valencia—about the orange, not València the city followed.  In slightly over 6-minutes, it evoked many images with dissonance and humorous pizzicato—not unlike spitting pits. The start, with machine like notations and bowing from the violins and viola, counterbalanced with cellistic pops and snaps for nearly a minute.  Then came a lot of juicing sounds, and other redolent melodies.  And the sense that an orange was being squeezed.  Frankly, I could hardly wait to have some zingy citrus thereafter! 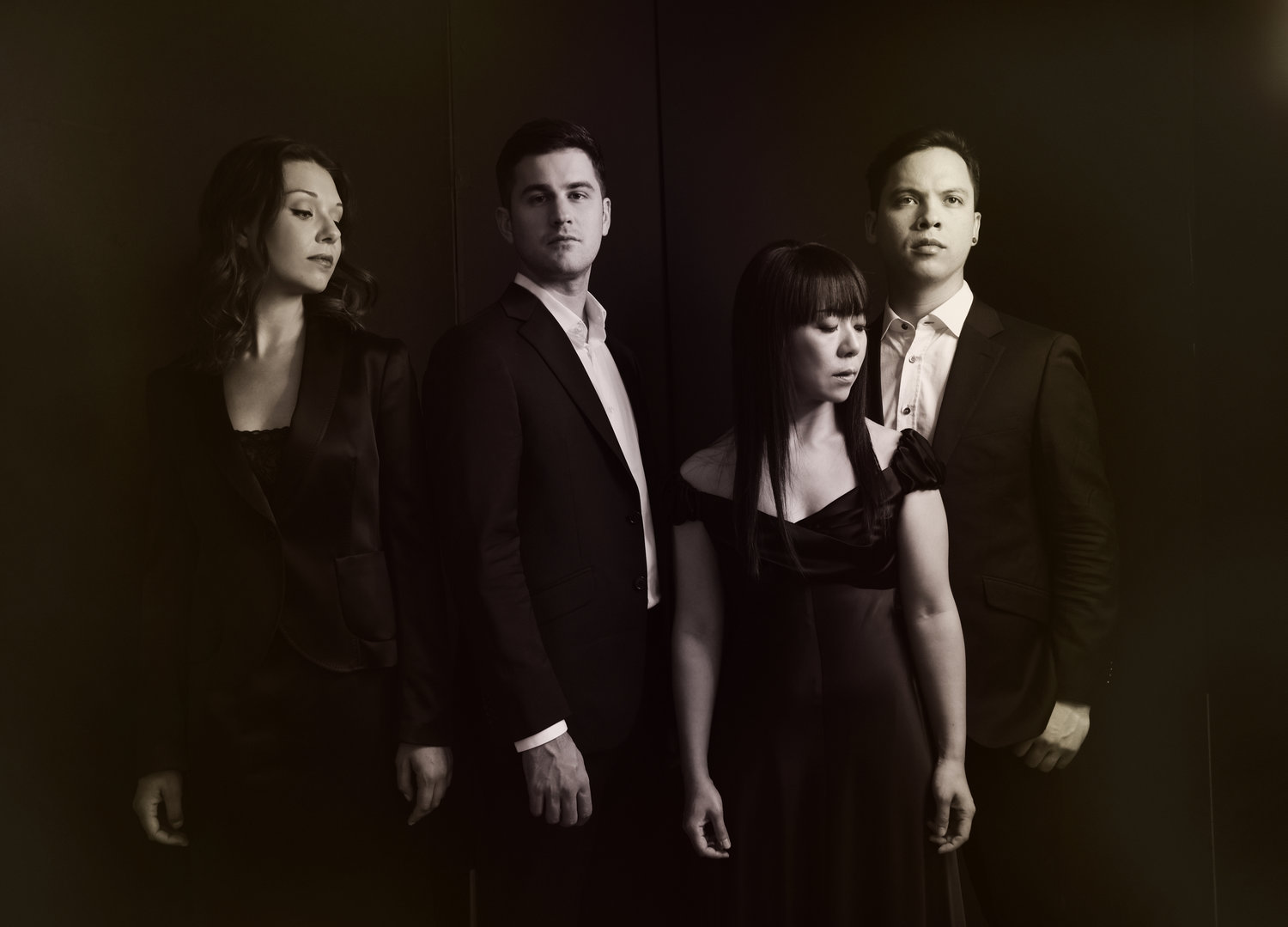 Three thoughtful arrangements from Bernstein’s Piano Anniversaries then provided nearly flawless musical respite.  Of the Piano Anniversaries, these three constituted great choices—In Memoriam William Kappell, for my Daughter, Nina and for Helen Coates—the first two written in 1981 and the last, in 1945.

Beethoven’s late quartet, Opus 132 in A Minor, “Heiliger Dankgesang,” crowned the concert, as such a magnificent musical jewel should. The individual voicing of the initial Assai sostenuto-allegro, varied and incisive, foretold fine experience. The second movement Allegro ma non tanto wafted evolved and sweet. Then the long Molto adagio third movement, with Beethoven’s dedication, which gives 132 its name, with its prayer-like initial phrases, building forward, provided reverence and joy that felt right for an Easter afternoon. And the brief Alla Marcia, assai vivace shifted back to the worldly, followed by the final moving Allegro appassionata.

Even on a Sunday holiday, the hall was filled to capacity with an audience happy to hear this masterful quartet, which came together at Juilliard and has evolved into a deservedly much-sought and innovative group. Attacca draws from present and past; recent explorations of contemporary work, led them to be “surprised and delighted to see so many connections to the string quartets of Beethoven.” So much so, that they have developed a project in which they will ultimately have performed all the Beethoven string quartets at the Trinity Lutheran Church in Manhattan. The Gardner performance of Opus 132 encapsulated all the right reasons for hearing and supporting the magic of classical music. I just might find a reason to go to Manhattan to hear their next “Based on Beethoven” concert!

Julie Ingelfinger, an amateur pianist, has long loved classical music. She also enjoys her day job as a professor of pediatrics at Harvard Medical School, pediatric nephrologist at MassGeneral Hospital for Children at MGH and as a deputy editor at the New England Journal of Medicine.

Comments Off on Attacca Ardent at the Gardner