Softer than sotto voce, the message seemed clear, listen! That is how international jazz and classical clarinet star Julian Milkis opened his program of music from the 18th through 20th centuries. With softness gradually making way to increasing volume, the first half of his show bound us in its spell. The only living student of Benny Goodman brought his clarinet artistry to Congregation Kehillath Israel in Brookline

The Canadian clarinetist appeared serious throughout a dozen musical items offered, most of them brief. Even in the second half of his Sunday evening performance there came slow pieces of Piazzolla, a long, all-too-long, lullaby, and for an encore—which he, himself elected to play without audience prompting—two more slow, sparse, and, yes, soft pieces.

Handel’s vocal music, Dignare o Domine, transcribed for clarinet and piano whispered in the community-styled gathering’s concert or meditation as many of the selections were prone to induce. Bach’s orchestral music, the popular Air, in the hands of Milkis soared above humanity reaching serene heights rarely encountered. It was not only the low decibel delivery responsible, his uninterrupted breathing, eventually noticed, would take its hold on the listener. Two of his own embellishments in the final cadence also induced tranquility. 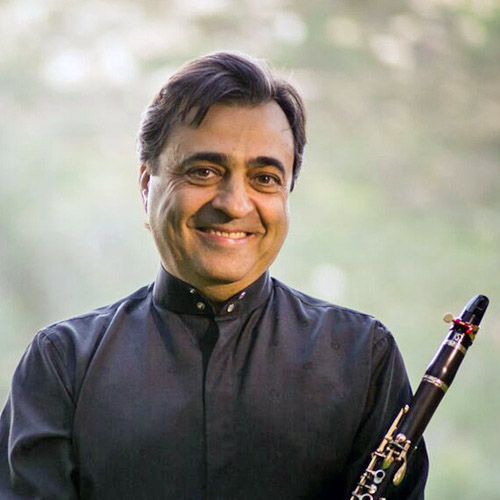 Expression and tempo picked up with Mendelssohn’s Andante from Sonata for Clarinet and Piano. Here, the piano is given solo status. Internationally known Russian pianist Sima Kustanovich collaborated as best she could with the baby grand before her. Pieces later on the program calling for loudness would test the voicing and, to a lesser degree, the tuning of the instrument.

With Milkis and Kustanovich, Pierne’s Canzonetta for clarinet and piano summoned late 19th suave Paris. The quick-note ascending flourishes slipped from the clarinetist’s fingers over a velvety breath.

Poulenc’s Sonata for clarinet and piano posted a few flairs for the first time in the show. Just before the end of the second movement, Romanza, amidst still more softness, Milkis gave a musical shout-out that would have you stand at attention. Was this a moment we were to remember?

After intermission, Soledad of Piazzolla, soft at first, of course, grew momentarily, and relatively, boisterous with that toned-down, tone-genius of Milkis. Heard next was Alec Templeton’s Americana, a sonata with a snazzy name, Pocket-Size Sonata No.1. Updated uptown New York imagery from the duo dismissed any potential corniness. The sliding notes of jazz on his clarinet appeared in mini-form—listen! Reminiscent of Zez Confrey’s piano novelty, Dizzy Fingers, Dick Hyman’s Clarinata, introduced speed and excitement—of a different kind. And Milkis defied exquisiteness, going somehow in the beyond to higher, inner communication.

Yet again, Julian Milkis eschewed visible virtuosity, showmanship, me-first generation attitude, odd twists and turns, and the like. Milkis altered your own breathing if not your expectations, and he did so in a pervasively sensuous way.

Comments Off on Julian Milkis’s Missive to Listen