Cantus, a male octet based in Minneapolis-St. Paul, is one of America’s few full-time vocal groups, performing over 60 concerts a year. This is no small thing. Most singers have to patch together a peripatetic existence of being in a variety of groups, flying all over the country.

Making their debut on the Celebrity Series of Boston Weds. evening at Pickman Hall, Cantus presented “Alone Together,” focusing on loneliness and reaching out in the time of too much interconnectedness through our non-stop use of cell phones, twitter, and the like. Timely, to say the least. Composer Libby Larsen (b. 1951), also from St. Paul, was represented by her five-movement commission (co-commissioned by the Celebrity Series) which wends its way through other interestingly curated songs. She explained in the handout:

In his landmark book, “Keeping Together in Time,” William McNeill convincingly states that its our natural condition, as humans, to create and sustain human community. We share feelings, we keep together in time through coordinated movements, like dancing, making music, marching, group exercising, attending community events, celebrating birthdays and holidays, we create groups, clubs, political parties, religious affiliations… All these human efforts, and more, are powerful forces in holding us together.

Yet, we are alone, ultimately, living the paradox of being alone together. YOU is a musical essay on the human condition of being alone together. It’s about us and we are its theme. YOU are the subject and recipient of its message. Cantus is our essay’s narrator. For the libretto, I identified nine words which describe being alive — You, here, now, who, are, where, know, need, love — and used them to frame questions about being human: Am I fated?; What is my meaning?; I need!; Am I safe?; Am I secure?; What is the center of my spirit? Then, drawing on poetry of Emily Dickinson and Edna St. Vincent Millay as muses for these questions (Dickinson’s You cannot put a Fire out / fate, I’m Nobody / Who are You? / meaning, Wild Nights! / need; and Edna St. Vincent Millay’s First Fig and Thursday / security), I created a loose narrative for my essay / I am unconditionally alive…I feel out of control…Who am I?…I need physical human contact…I need security…what is security?…I am security.

Made up of four tenors, two baritones, and two basses, Cantus, like other groups of this sort, dresses alike, and in general, pretends they’re having a fabulous, chummy time, even though it’s their, perhaps, 30th performance of a program. Each of the eight men walked up to speak about variations on communication and solitude, and eventually, I got tired of this shtick. I would have preferred less well-acted, polished chit chat and more singing. But I may have been in the minority, as someone who has heard many superb vocal groups and was no longer bowled over by cuteness, friendliness and charm. 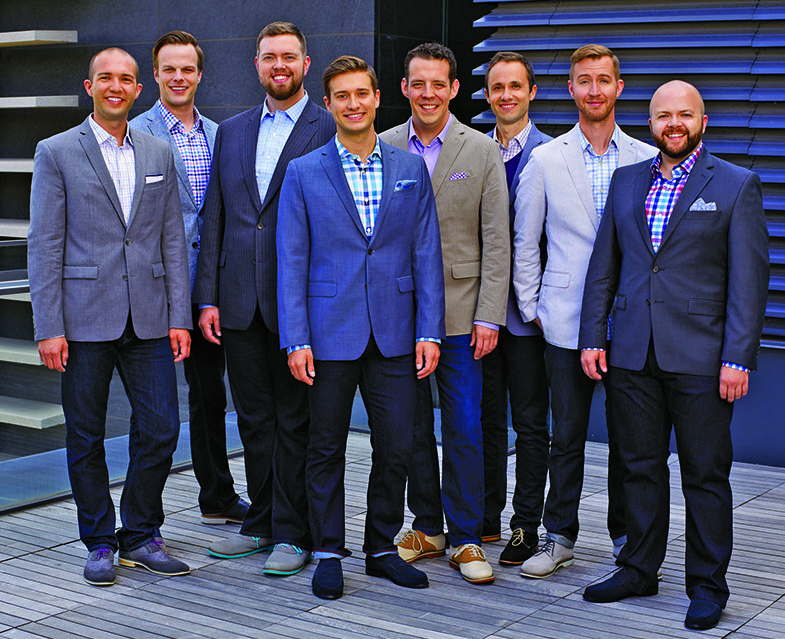 These small complaints aside, I enjoyed “Alone Together” and the variety of music chosen to illuminate it. There was Beethoven’s “Monk’s Song” (text by Friedrich Schiller) and the serene “Calme des nuits” by Camille Saint-Saëns followed by Libby Larsen’s “You:III,” to a poem (one of two) by Emily Dickenson (“I’m nobody, Who are you?). This was followed by Simon and Garfunkel’s “A Most Peculiar Man,” one of the concert’s highlights. Another highlight was John Lennon and Paul McCartney’s “She’s Leaving Home,” sung by a tenor with the others as a back-up group. Things got a tad cutesy during Ingrid Michaelson’s (b. 1979) Twitter Song with all eight holding iPhones and two men taking a duo-selfie.

Being a capella group often implies using making imaginative sound effects, and the usual ones were used to good effect- Slapping one’s thighs, clapping, singing various syllables like Doo Doo, passing a line along. There were many moments when Cantus was astonishingly good, and Pickman Hall was a perfect place to hear them.

Dave Matthews (b. 1967) Gravedigger with its refrain of “Gravedigger When you dig my grave Could you make it shallow So that I can feel the rain” was sung by one singer at a time, getting much louder toward the song’s end. The popular Broadway show “Evan Hansen” was represented by its banner anthem of hope, “You will be found,” which lent a well-needed ray of optimism to the evening. As one singer put it between songs, “The noise in our heads keeps our own voices from coming through.”

Some of the evening’s most memorable music was written by Steven Sametz (b. 1954) to five poems of Walt Whitman. It ended the program with hope of joy in finding love. “We are two fishes swimming in the sea together…. We are snow, rain, cold, darkness. We are each product and influence of the globe, We have circled and circled till we have arrived home again, we too, We have voided all but freedom and all but our own joy.” Samitz’s beautiful quintet of songs, “We Two,” was, along with Libby Larsen’s YOU and David Lang’s “Manifesto” co-commissions by Cantus and celebrity Series of Boston via Music Accord. I liked “Manifesto” with its wishlist of traits he wants from a love, singing of a yearning to “be with someone who won’t get tired of me… Who is exactly what I’ve said, I always wanted who accepts me for who I am.

Cantus brought the poems’ haunting words about the human condition to life with poise and sincerity. Their eight voices work very well indeed, both Alone and Together.

Comments Off on The Minneapolis Eight Serenade Pickman