Founded in 1982 by members of the Harvard Medical School to engage various communities and to support health-related nonprofits, Longwood Symphony Orchestra projects a bold and generous sound from 80 or so players in its Jordan Hall concerts. Doctors and students in the medical and pharmaceutical arts apparently pay to play—a sliding scale up to the suggested $500—which helps with the engagement of the attentive music director Ronald Feldman as well as the ensemble’s outreach to deserving organizations. Last night’s concert began with a 10-minute video saluting the work of Partakers, whose “College Behind Bars mentoring program for people in prison enhances skills critical to completing a college degree and builds trusting personal relationships.”

Once too familiar as a cartoon background but brilliant withal, Rossini’s Overture to William Tell began with a nervous cello solo and tentative section, under pressure perhaps because of the larger-than-life cello soloist slated to appear in the next number. The physicians of the orchestra quickly healed themselves enough to deliver the balance of the introduction, on through the great crescendo, with pizzazz and smiles. The oboe’s reverie from Thomas Sheldon, and the fluttery response of Brita Swendeborg’s piccolo (all night we heard exemplary work from winds and brass), perfectly set up that trumpet call (titters abounded) to the immortal Galop. Feldman balanced humor and excitement without resort to camp. 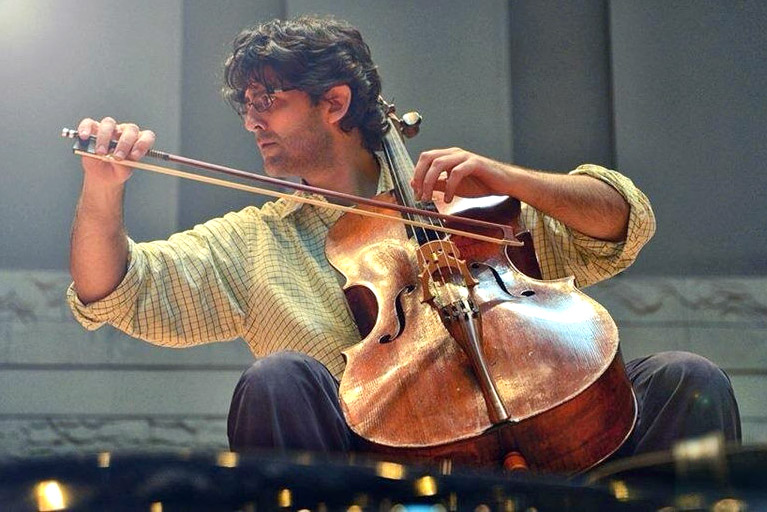 Amit Peled’s bio tells us that the 6’5” cellist “started life as a basketball player.” That sounds painful for his mom. Like another giant of the cello, Lynn Harrell, Peled makes his instrument appear the size of a viola. Yet what a huge, lustrous tone this artist produces on his ex-Casals Gofriller. He could cover the entire orchestra even in his pianissimos, but he also showed tremendous affinity for, indeed sensitivity to, his fellow players, seeming especially to woo and cajole the first violins. He deployed molten bronze tones to great effect, whether scampering through filigree or emoting in song. Feldman led the first Haydn Cello Concerto with classical restraint; the band responded with sometimes challengingly brisk tempi, though without mishap. Peled’s romance of orchestra and audience, though, closed the sale.

It’s a commonplace that Schumann shows weakness as an orchestrator. But on this night, that played to an LSO strength: a big lustrous tone in tuttis. In the muscular Third Symphony (Rhenish), Feldman led a determined ensemble to an infectious dramatic sweep—heart, and communicable lilt too. In fact, the enthusiastic traversal suggested an 1851 dress rehearsal under the composer. Again the winds and brass never worried this listener, and the estimable Jeremy Lang’s timpani suffered no arrythmia. Strings managed to produce well-tuned and secure moments, especially in the chorale-like fourth movement and in the peroration of the fifth, which carried us off.

Comments Off on A Bad Case of Lovin’ Longwood